Your Morning Dump… Where there’s pressure on the Green with the Red, White and Blue 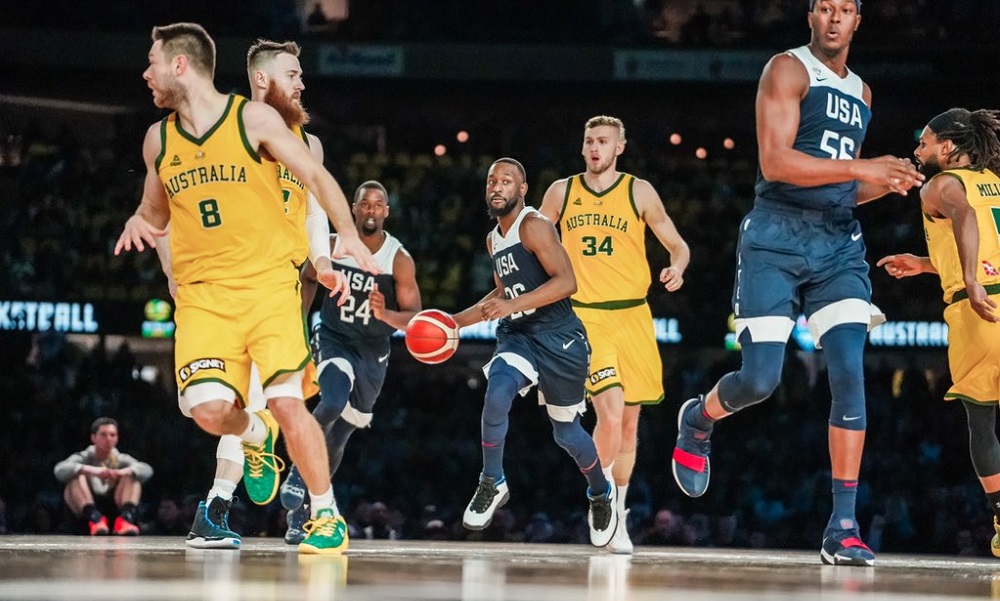 Your Morning Dump… Where there’s pressure on the Green with the Red, White and Blue

In August, everyone needs a basketball fix, and with four Celtics on Team USA, you’re damn right Boston fans last night stayed up late (in the States, anyway) to watch the second of two exhibition games between the Americans and the Boomers of Australia in Melbourne.

There’s never been anything close to four Celtics repping the country at the same time. Since 1992, when Larry Bird was on the Dream Team in the Olympics, hardly any Celtics have been chosen to wear the USA uniform. About the only one I can actually recall was Paul Pierce at the 2002 FIBA World Championship (which is now the World Cup that the current Team USA will play in soon).

So there’s some excitement among Celtics fans to watch this squad – at least, as long as they win. And last night they didn’t. Team USA fell to Australia, 98-94, which was the American men’s first-ever loss to the Boomers; only the second time in more than 50 tries that the USA had ever lost a pre-tournament exhibition game; and the first American loss in 13 years.

It was the first loss for the U.S. in a major international tournament or exhibition since the 2006 world championship semifinals against Greece. The Americans won the bronze-medal game of that tournament, and then were unbeaten through the cycles for the 2007 FIBA Americas, 2008 Olympics, 2010 World Cup, 2012 Olympics, 2014 World Cup and 2016 Olympics.

Add all that up, and it was a 78-game winning streak for the U.S. — the longest in program history.

And it’s now over.

1: They didn’t play what might be their normal rotations: This team is still trying to figure itself out. They’re running out of time, but there’s zero chance this is the team they put on the floor down the stretch in future situations.

2: They need to figure out their defense: There was a bit too much standing and watching in this one. Maybe they’re tired or disinterested, but they shouldn’t be. There are better teams than Australia in this.

3: Someone needs to step up: This might be Walker’s job, but the US needs a player to go to when the excrement hits the spinning blades. There has always been a question as to what happens when this team goes cold, and they went through stretches that called for a hero.

As Spiderman’s uncle said, with great power comes great responsibility. Whatever happens with this squad, the Celtics will own it. Right now, we fans are enjoying the prestige of “Team Shamrock,” but it’s going to hurt if they don’t win the World Cup. The media, the talking heads, and the fans of every other NBA team will make sure of that.

The final 12-man roster won’t be a powerhouse of all-NBA guys, so they’re going to have to play together and play harder than their opponent every night. We learned in Melbourne that anything less won’t be pretty.

That’s all reminiscent of the 2002 team with Pierce. That group finished an embarrassing sixth in the tournament, even though they had home country advantage (the games were in Indianapolis). It was a debacle. Pierce was the team’s leading scorer, but he clashed with coach George Karl, who benched him for a while, and the future Truth took a lot of heat (some fair, some not) for the team’s failure. It added to his early-career frustration, which in turn nearly led to his departure from Boston.

Our current quartet of USA Celtics is getting this time together before training camp. It’s supposed to be a helpful opportunity to jell sooner than later. The last thing we need is a losing experience that could cast an early shadow over the upcoming season. Let’s hope Team USA can learn something from last night’s loss and not let it happen again.

The night began with good news: Marcus Smart was back in uniform after his sore calf healed. He was a starter and drilled his first shot, a three.

Kemba Walker came off the bench to hit his first three shots, helping the Americans to a 26-23 lead after one quarter. Walker, Jaylen Brown and Jayson Tatum were on the court together several times throughout the game.

The USA was lax on defense in the first half, repeatedly allowing baskets on back-door and weakside cuts. However, just like the previous game, the USA led by one point (49-48) at halftime.

In the third quarter, the USA noticeably picked up their intensity, both on defense and attacking the basket. When the Jays combined to force a steal and finish with a dunk, the USA had their biggest lead at 68-58. But Australia suddenly regained their intensity and, aided by some bonehead USA turnovers, fouls and missed layups, the Boomers came storming back to lead 78-76 at the end of three quarters.

The fourth quarter was a bar fight, with repeated lead changes. Joe Ingles swished a three to put Australia ahead, 88-87, and the Aussie play-by-play announcer screamed that the final five minutes could be the most important in Australian men’s basketball history. Patty Mills then banked in a three for a 4-point lead and everyone in Oz flipped out. The lead peaked at 6 twice, on a Mills layup and jumper, but Donovan Mitchell’s 3 cut that in half.

The USA got a stop on a 24-second violation, but with about 12 seconds left, Joe Harris – who led the NBA in three-point percentage last season – missed an open corner three that would’ve tied it. That was the USA’s last gasp.

Mills shot 10-22 and finished with a game-high 30, including 9 straight for the Boomers in his late-game burst. The USA had no answer, partly because Smart didn’t play much in the second half.

Marcus Smart with the tough finish for @usabasketball!

Kemba is just too quick. 💨

On Page 2: Behind the scenes with the rooks

YouTube won’t allow playback of these videos on other sites, but all five installments (each three or four minutes long) can be viewed on the Celts’ YouTube channel.

And, finally… Can’t stick to basketball

The Celtics this week have been connected to political news on several fronts, so here’s a brief, nonpartisan summary.

First: Yesterday Rich Jensen shared the news about the legendary Bob Cousy receiving a Presidential Medal of Freedom, but in today’s America the story didn’t end with handshakes and glad tidings all around. There was major backlash over what Cousy said in his acceptance remarks: “This is special because it is being presented by the most extraordinary president in my lifetime.”

Celtics Twitter blew up with two reactions, either “F— Cousy” or “Cooz is now my all-time favorite.” There was no in-between. It wasn’t until yesterday that we learned the nuance and context of Cousy’s words.

Mr. Cousy, a long-time independent, said he respects the White House as the most powerful office in the world and he felt compelled to pay tribute to the president.

“I understand how controversial Trump is,” Mr. Cousy said. “So I didn’t want to say something that was going to go viral and get all of us in trouble, but I thought that was a nice middle ground and ‘extraordinary’ I suppose can be interpreted in any number of ways in the mind of the listener.”

Not so fast, everybody. The statement by Cousy was carefully crafted. Look up the word “extraordinary’’ in the dictionary. In my Google search, it comes up as “1. Very unusual or remarkable.’’

There you go. Would anyone disagree that President Trump is “very unusual”?

When I told Cousy that some of his backers felt betrayed by his characterization of the president, Cousy said, “My daughter Marie from Seattle is not a hater — she doesn’t have that emotion in her body — but she is certainly not a Trump fan and she was able to accept this graciously. So I’m not worried about anyone else.’’

The issue now is that Cousy’s remarks did indeed go viral – his name was trending on Twitter for hours – and his explanation won’t. We’ll stop here by saying that the Cooz obviously has no future as a political strategist.

Related – NBC News: Boston Celtics legend Bob Cousy deserves his Medal of Freedom, even though he doesn’t think so

Second: Wyc Grousbeck is selling his vacation home to…

Barack and Michelle Obama are buying a multi-million dollar estate in Martha’s Vineyard.

The former president and first lady are in escrow to purchase the property at 79 Turkeyland Cove Road in Edgartown, Massachusetts, from Boston Celtics co-owner Wyc Grousbeck, TMZ reported Thursday.

The couple has been renting the beachfront property this summer. They reportedly offered less than the $14.85 million listing price.

Wyc is fabulously wealthy, but he needs to stick with the Celtics. Being a real estate baron is not in his future.

Third and last: Enes Kanter gave some interviews yesterday about being a man without a country. His situation is terrifying.

Turkish President #DictatorErdogan has taken #Turkey towards a dangerous path, and I believe if

it will solve the problem.
Turkey went from a Democracy to a dictatorship under @RTErdogan ‘s rule.@FoxNews 🙏 pic.twitter.com/raR975in5a

The Celtics play at Toronto on Christmas and March 20. They’ll be without Kanter if this doesn’t get sorted out.

NBC Sports Boston: A tall order for Celtics’ Tacko Fall to prove he has more to offer than incredible height