Oregon vs. Auburn⁠—since the 2010 title game 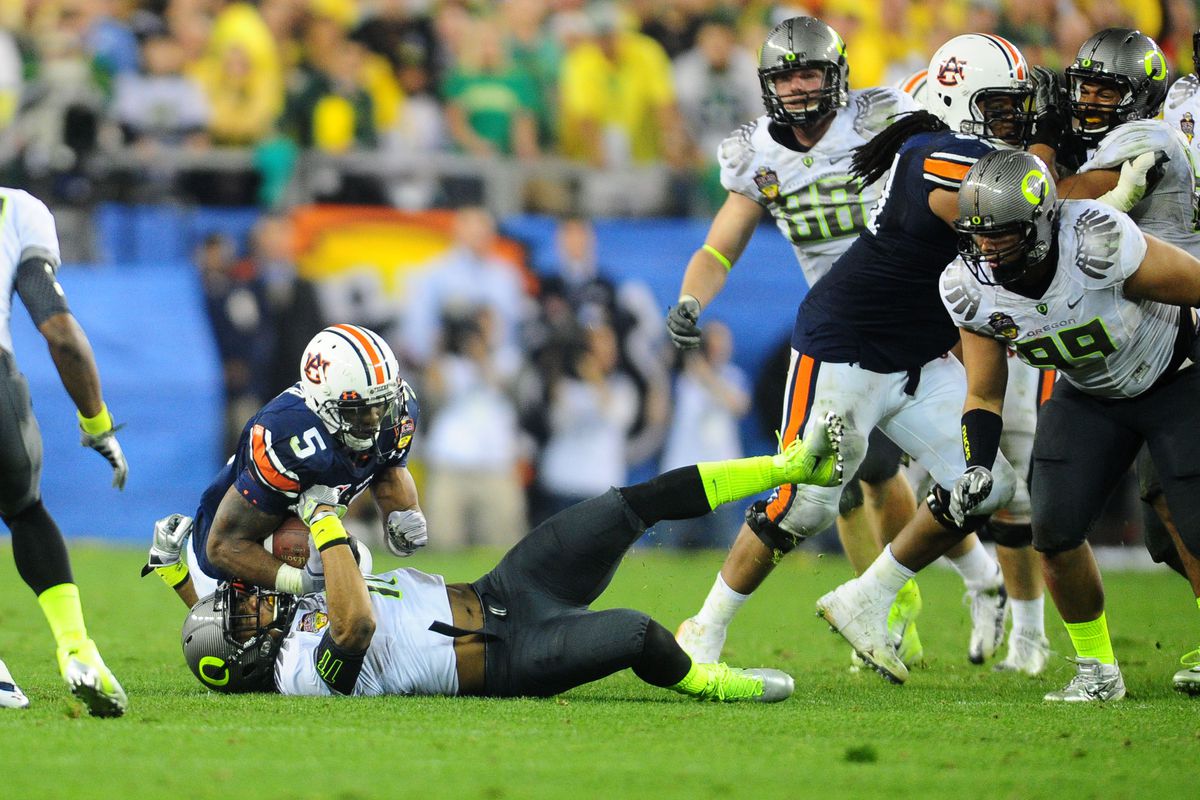 Oregon vs. Auburn⁠—since the 2010 title game

It will be a top-20 match-up in the Dallas area on Saturday night as No. 11 Oregon squares off against 16th-ranked Auburn.

The contest will be just the second match-up between the schools, but the first one was quite memorable. In a match-up of undefeated teams to cap the 2010 season, Auburn topped Oregon, 22-19 in the BCS National Championship in Glendale in what would be one of the more exciting title games of the BCS era. Auburn kicker Wes Byrum decided the contest with a 19-yard field goal as time expired.

The offenses stole the story lines coming in as Auburn, led by Heisman Trophy winning quarterback Cam Newton, won numerous shootouts to reach Glendale. Chip Kelly’s high-flying Oregon offense, led by running back LaMichael James, led the nation in both total and scoring offense. The Tigers also ranked in the top 10 in both categories.

The teams combined for nearly 1,000 yards, but the defenses did not break for most of the night. Newton’s 30-yard touchdown pass to Emory Blake gave Auburn a 16-11 lead at the break, but up until the game’s final three minutes, a short Byrum field goal had accounted for all the second half scoring.

The Ducks were able to draw even with 2:33 after quarterback Darron Thomas, who passed for 363 yards and two scores, found James from two yards out for the touchdown and then Jeff Maehl for the tying 2-point conversion. Newton finished the night with 265 yards passing and two touchdowns to go with 64 rushing yards, but it was running back Michael Dyer, who was most responsible for moving the Tigers into field goal range.

Dyer rushed for 143 yards on the evening, but his improbable 37-yard scamper on the last drive moved Auburn inside the Oregon 25-yard-line. Dyer looked to be stopped after a short gain, but his bottom was on top of an Oregon player and had never touched the ground. Three plays later, Dyer went for 16 yards to the Oregon 1-yard-line.

With the teams set to meet on Saturday night, here’s a look at the tale of the tape as to how Oregon and Auburn have fared since. The teams will meet on Saturday at 7:30 p.m. ET in a contest that airs on ESPN.

Oregon: 4 (Chip Kelly, Mark Helfrich, Willie Taggart, Mario Cristobal)
Auburn: 2 (Gene Chizik, Gus Malzahn)
After leading Oregon to the national title game in 2010, Chip Kelly would go 24-3 over his next two seasons before trying his hand at the NFL. Successor Mark Helfrich looked to be picking up where Kelly went off by going 24-4 in his first two seasons before a 9-4 finish in 2015 and a 4-8 campaign in 2016 that ultimately led to his dismissal. Willie Taggart went 7-5 in 2017 before leaving for Florida State. Since then, the job has belonged to Mario Cristobal.

Gene Chizik was not a popular hire when he came from Iowa State to Auburn, but won plenty of favor with the 2010 national title. That was followed with an 8-5 season in 2011 and a 3-9 season in 2012 — Auburn’s worst since 1952. In the years since, Gus Malzahn has been the head man. Malzahn, who was the offensive coordinator for the title team in 2010, is 53-27 as he enters his seventh season at Auburn.

Oregon: 5 (2011-15)
Auburn: 4 (2013-14, 2016-17)
In the five years following the national championship game appearance, the Ducks finished ranked in the final AP Poll in each season. Oregon hasn’t finished ranked in any of the last three seasons, marking the longest hiatus since going unranked from 2002-04 under Mike Bellotti. Oregon is coming off a 9-4 season.

Auburn did not finish ranked in the final two years under Chizik, but have done so in four of the six years under Malzahn. After a 4-3 start to last season, the Tigers won four of their final six contests with a 63-14 thrashing of Purdue in the Music City Bowl capping the year.

Both of Auburn’s SEC West titles were clinched with home wins over No. 1 Alabama in the regular season finale. Chris Davis’ memorable 100-yard missed field goal return, which later came to be known as “Kick 6”, gave the Tigers a thrilling 34-28 victory in 2013. In 2017, Auburn topped the undefeated Crimson Tide, 26-14.

Oregon: 5-3 (.625)
Auburn: 3-4 (.429)
From 2011-14, Oregon won four straight bowl games, including three major ones. The lone bowl victory since came last season against Michigan State in the Redbox Bowl as the Ducks pulled out an ugly 7-6 victory. Following the national championship season, Auburn defeated Virginia 43-24 in the Chick-fil-A Bowl, but the Tigers are just 2-4 in bowls under Malzahn. Aside from the shellacking of Purdue last season, Malzahn’s only other bowl win as Auburn head coach came over Memphis in the 2015 Birmingham Bowl, 31-10.

Oregon: 3-1 (.750)
Auburn: 0-3 (.000)
Following the national championship appearance, Oregon won BCS bowls in consecutive years, knocking off Wisconsin 45-38 in the Rose Bowl to close 2011 and Kansas State, 35-17, to cap the 2012 season. The Ducks blasted defending national champion Florida State 59-20 in the Rose Bowl, which was the first-ever College Football Playoff game in 2014, but couldn’t get past Ohio State for the national title.

Oregon: 0
Auburn: 0
Auburn and Oregon played for the national championship in consecutive years, but came away empty. The Tigers led Florida State 21-3, but fell 34-31 as Jameis Winston threw the game-winning pass to Kelvin Benjamin with 13 seconds remaining. That FSU team would run its win streak to 29 games before Oregon took care of it in the Rose Bowl on Jan. 1, 2015 by scoring the game’s final 34 points and forcing five second-half turnovers in a 59-20 rout of the Seminoles before ultimately falling to Ohio State. Oregon still does not have a national championship. Aside from 2010, Auburn claims the 1957 national title.

Oregon: 1 (Marcus Mariota, 2014)
Auburn: None
Oregon is still waiting for that coveted national championship, but in 2014, it did have its first Heisman Trophy winner. Quarterback Marcus Mariota enjoyed one of the greatest seasons ever for a signal caller, passing for 4,457 yards and 42 touchdowns compared to just four interceptions. Mariota finished with 15 rushing touchdowns and caught another to cap the year with 58 total touchdowns. The Tigers haven’t had a Heisman winner since Newton in 2010. Running back Tre Mason’s sixth-place finish in 2013 is the closest they’ve come since.