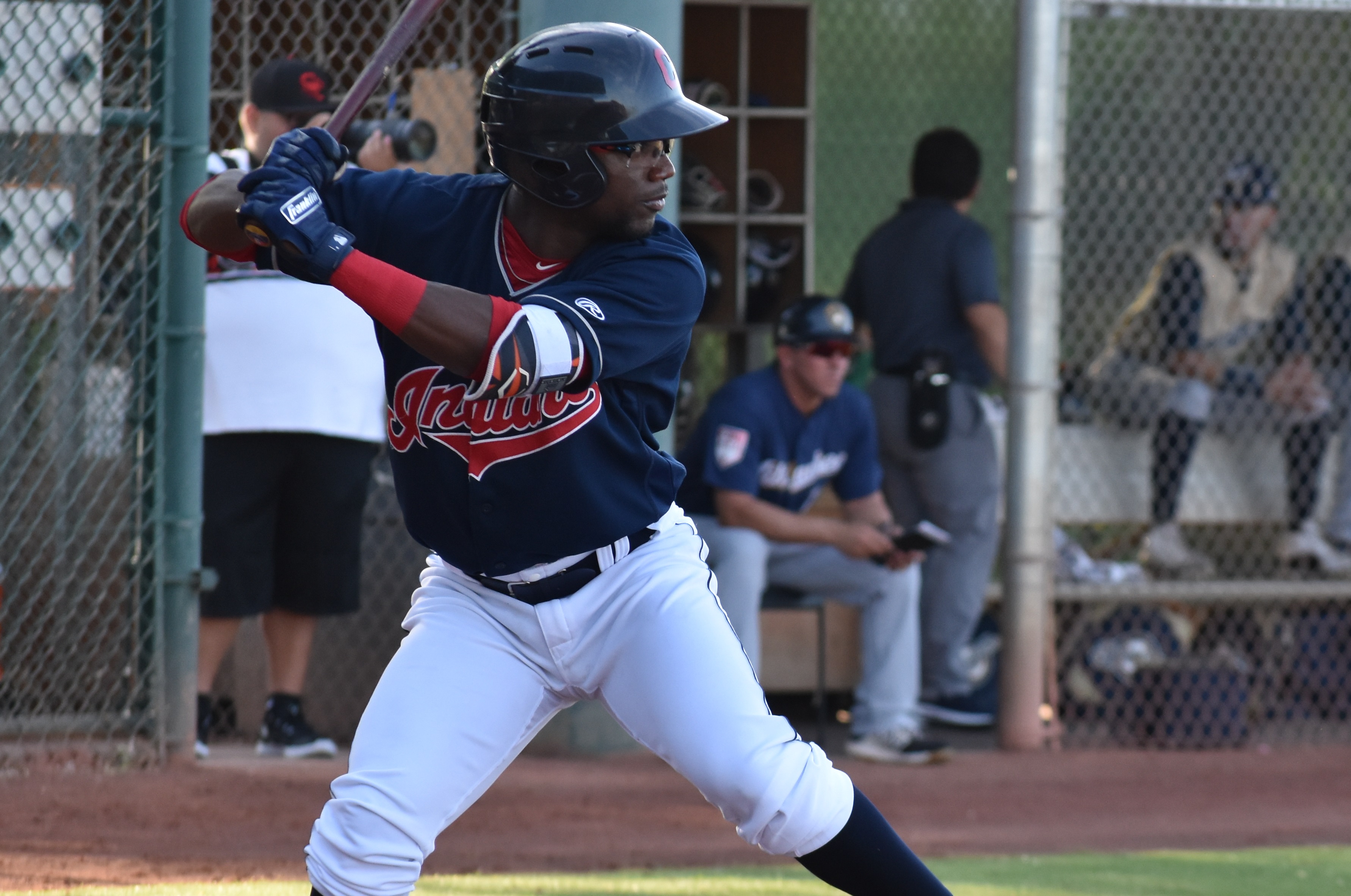 As the 2019 minor league season comes to a close, Burning River Baseball brings you the final positional prospect ranking of the season looking at the best short stops in the Indians farm system. I believe we saved the best for last as this list will include some of the top international signings and draft picks over the last few years.

There has been some massive movement on this list compared to last year. Number one prospect in 2018, Willi Castro, was traded to the Tigers for Leonys Martin while numbers two and six, Yu Chang and Eric Stamets, have graduated off the list by making their MLB debuts. Raynel Delgado switched from the number four short stop to the number two third baseman, although he may wind up on the second base list next year after a position change in Mahoning Valley. Jesse Berardi was also moved to the 3B list going from #8 SS to #3 3B. Jose Fermin was included in the 2B list moving from #10 SS to #6.

Originally signed as an international free agent out of Venezuela by the Cubs, Monasterio was traded to Washington last year for Daniel Murphy, then again to Cleveland last off-season for Yan Gomes. He is a defense first player who can hold his own at short or second with less time and success at third base. Offensively, he has an extremely light bat, strikes out too much and doesn’t walk much. He doesn’t provide any advantage on the bases either and hasn’t had a truly effective base stealing season since he was 17 in the Venezuelan Summer League. He is close enough to the big leagues to project utility man as his future, but even there he may ultimately be stuck in AAA.

For the crowd that believes home runs and strike outs are ruining baseball, look no further for your favorite prospect. Clement has struck out in less than 8% of his career plate appearances and that number is staying constant as he advances through the system. A true throw back, he also almost never walks and has very little power, hitting three home runs so far in his three year pro career. Clement is a solid, but not flashy defender with the ability to play second as well as short.

Gonzalez runs to second on a pick off attempt during a 2019 AZL Indians Blue game.

Despite being a late round high school pick, Gonzalez took off quickly in Arizona and has already been promoted to Mahoning Valley. While he wasn’t the man drafted specifically due to his elite defense at short stop, he was the most proficient of all Indians middle infield draft picks in 2019 defensively. His offensive success in Arizona must be taken with a grain of salt, however, and I have warned many times not to take these numbers seriously. The sheer volume of players at the level means that there are many who are unqualified to play at this level and skew stats into extreme directions. After his promotion, Gonzalez’s numbers dropped extremely, particularly those correlated with plate discipline.

There aren’t a whole lot of positive things coming out of the Indians Dominican Summer League team right now, but Martinez may be the best of the group. He hit well during his short period in Arizona for extended spring training and has been one of the top hitters in the Dominican as well. His walk rate is particularly impressive and has lead to an OBP over .400. He has a quick bat and has hit for good power both in extended spring and in the DSL. While the international class of 2017 was largely defense heavy with Jose Tena and Brayan Rocchio, the class of 2018 already looks to be trending more power, although there is still some focus on defense and speed.

When you are taken in the second round of the draft, you automatically get a certain amount of hype. With Valdes, some of that hype was dissipated with the knowledge coming in that he didn’t have much of a bat and was instead a glove first short stop with good speed. Having seen him play most of the AZL season, I can confirm the speed, although the glove has not been as elite as advertised.

When he does reach base, Valdes is very aggressive and very efficient, but he doesn’t reach base particularly often. Since he is just 17, he’s still very young even for the Arizona League and has plenty of time to work on things like plate discipline and power.

Rodriguez runs to first as he finishes his swing during a 2019 AZL Indians Red game. – Joseph Coblitz, BurningRiverBaseball

Just like in 2017, the Indians had a strong middle infield class of 2018 including a pair of names who didn’t make the list this time, but likely will next year, Junior Sanquintin and Jose Baez, in addition to the two who did, Rodriguez and Martinez.

Rodriguez is one of the tallest of the signings over the past two years and he has power to go with his size. Prior to his promotion to the AZL in his first season from the Dominican Summer League Indians (something extremely rare), he had seven doubles, four triples and three home runs. Against more advanced pitching, he hasn’t had the same success in the AZL, but the talent is there. While he has almost exclusively been a short stop so far in his career, I could see him moving to third based on both his ability and the talent around him.

The biggest disappointment in the Indians farm system this year was Gonzalez and Richie Palacios both going down with torn labrums early in the season, costing Lake County an extremely exciting pair up the middle. Instead, Gonzalez has now been in the system for three years and still hasn’t played a full season nor reached anywhere near his full potential. Based on the time I have been able to observe Gonzalez (mostly unofficial games in extended spring), he has been a base runner first, defender second and hitter third.

He walks a lot to keep his OBP afloat and can be dangerous on the bases, although he didn’t show it during his limited time in official games over the  last two years. There is a lot of potential here, but he is losing his advantage in youth and will likely have to start in Lake County again next year.

Bracho and George Valera were the star signings in the Indians class of 2017, but injuries marred the start of both careers and Bracho is still having trouble getting onto the field. He finally made his official debut this year in the AZL, but missed nearly a full month from late July through August due to another injury. He is incredibly strong for a middle infielder, hitting six home runs and slugging .606 during his brief run with Indians Blue in 2019, but has serious defensive issues, most likely due to his lingering arm injuries.

It is important to note that, while I am including him here, Bracho is no longer a short stop. He was signed as a short stop, had played short stop in previous unofficial games that I watched and worked out there in practices, but has been used exclusively at second in official games. This is likely due to him lacking the arm strength to play on the left side of the infield. Since I wasn’t aware of the position change when I made the 2B list, I felt it important for him to be included here as he is such an elite bat.

Rocchio pulls back a bunt for a ball during a 2019 extended spring training Indians game. – Joseph Coblitz, BurningRiverBaseball

Rocchio may end up being the real short stop prospect out of the 2017 international signing class and is the flashiest defender on this list, although he is certainly not the most proficient. An extremely electric player, Rocchio is free swinging and won’t hesitate to dive for a ball. He hasn’t developed much power yet, but has a great line drive attack that should eventually turn into a lot of doubles when combined with his aggressive base running style.

Freeman has everything you could want from a prospect. Despite being a high school pick, he has already advanced to high A in his second full season where he has continued the success at the plate that he has had at every level. He doesn’t have a ton of power, but still has a great .310/.376/.420 batting line due to his advanced contact ability. Like a few others on this list, he doesn’t strike out or walk much, preferring to attack pitchers early in the count. Once on, Freeman is a terror on the bases, taking 36 of his first 45 attempts.

My personal knock on Freeman is that, while he is a good defender, I don’t think he is good enough to stick at short stop. He lacks the range and arm of Rocchio and the pair of Gonzalez’s and is far from what Cleveland is currently getting in Francisco Lindor. He could advance to AAA by the end of next year and, with Lindor under control for two more seasons, could potentially be on the same team as Lindor at some point. Because of this, I believe he should work out more at second base as he was doing with Jose Fermin prior to reaching Lake County.