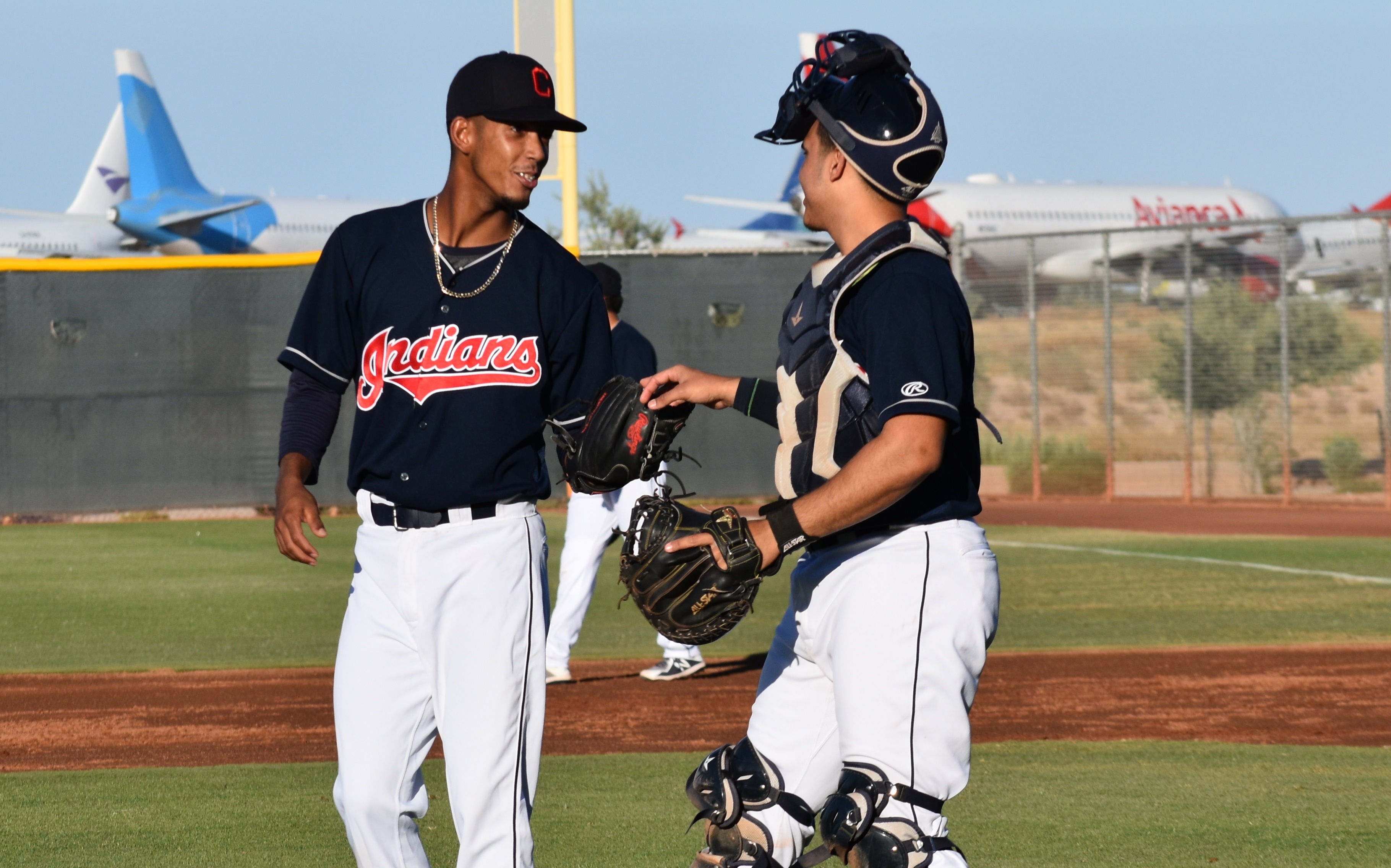 For the second season in a row, the Indians younger squad (called Indians 2 in 2018, Blue this year) outplayed their brothers and this year, that means no post-season for Indians Red. After finishing at .500 in the first half, they fell below even in the second half and finished the year in the middle of the pack for the Arizona League West division. Early on, this team was the home for one of the top offensive performers in the AZL, Yainer Diaz, but a mid-season promotion sent him to Mahoning Valley and the offense could never make up for this loss.

One of the top players from the 2018 DSL Indians, Brauny Munoz not only maintained his level of domination in Arizona this year, but improved himself. He had good command last year, but had great results with his curve ball this year, leading to an increase in strike outs. Munoz was significantly punished by the poor infield defense of the Indians Red, yet still managed an ERA below 3.00 despite a BABIP of .386.

Due to the errors behind him, more unearned runs scored this season against Munoz than earned runs with the defense being at fault for 18 of his 35 runs allowed. In the future, however, his 40% ground ball rate should be a huge asset once he gets some competent fielders behind him.

As mentioned in the intro, offense was a major problem with this team, but the bullpen was incredible. Matt Waldron and Kevin Kelly were nearly perfect, but will be considered with their other teams (the Scrappers for Waldron and Indians Blue for Kelly). Instead, the biggest name who stuck around for the whole season was Kevin Coulter.

Coulter was a 33rd round pick out of Mercer, but was incredibly dominant in what was often a long relief role. He ended the season with 47 strike outs in 36.1 innings, walking 14 and allowing just nine earned runs. He pitched three or more innings in each of his last three appearances and gave up zero runs total across them. This includes his incredible performance on August 17th when he went 3.1, allowed one hit and struck out eight.

From the opposite end of the draft, first round pick Daniel Espino was nothing but dominant during his brief time with team Red. While he finished the year with the Scrappers, he spent more time in the AZL where he made six starts totaling 13.2 innings with 16 strike outs and three runs allowed.

Of course, it wasn’t all pitching on Red and there were a few standouts offensively. Micael Ramirez was one of few return players due to the fact that he broke his hamate bone in extended spring and he hit like a returning player, batting .313/.393/.375. In addition to a good awareness of the strike zone while hitting, Ramirez is one of the best defensive catchers to play at this level in years and has a good chance of sticking around in the Indians system for a long time.

Rodriguez throws to first while playing third base for the 2019 AZL Indians Red. – Joseph Coblitz, BurningRiverBaseball

A pair of high school first basemen also had good offensive years as Joe Naranjo and Will Bartlett each put up solid numbers. Of the two, Naranjo was the better defender and Bartlett the better hitter. Both reached base at a fair clip and should have solid futures in the organization.

Defensively, I can only commend one member of the 2019 AZL Indians Red, Gabriel Rodriguez. The 17 year old short stop was a late call up from the Dominican Summer League, but still played quite a bit for the AZL team before the season ended. Mostly playing third base, he made both spectacular and routine plays, something rarely seen in this league. While he strikes out far too often at the plate, he also showed great power potential and was the youngest player on the team (the only one born in 2002), so he has plenty of time to fix any issues.

This section is generally for players who had poor stats during the season, but showed great potential, and that defines the year of Samuel Vasquez pretty well. In five of his first six appearances, he allowed one or fewer hits and in four of six he didn’t allow a run. During these appearances, he showed great movement on his pitches and was adept at getting hitters to swing and miss (18 K’s in his first 16 IP). While he had some good appearances after this during this season, a lack of control became his most prominent feature.

By the end of the year, he had walked 20 and hit 3 in 34.1 innings with his strike outs dropping as his innings increased. On a positive note, he pitched five innings in each of his last two appearances, so he at least appears ready to take on a full time starting role in that aspect.

One of the more fun stories this year with team Red was Jhan Rodriguez‘s journey from utility infielder to reliever. Not quite your typical position player pitching, Jhan struck out 32 in 23.1 innings while earning five saves. He has a low 90’s fast ball and a solid curve to keep hitters off of it. At 21, he was one of the older members of the team, but that can be forgiven considering the position change. He seems advanced enough on the mound, however, to move multiple levels next year to catch up.

After Gabriel Rodriguez, the second best defender on team Red was the second youngest player, Landy Pena. Used primarily at second base, Pena was a very fluid defender who can make any play and fill in at short if necessary. He had a very odd season at the plate, however, with just nine hits in 54 at bats, none for extra bases. At the same time, he walked 15 times, giving him a .338 OBP. Looking at his make-up, Pena is the player I find it easiest to look beyond his offensive struggles.

Jordan Brown had similar offensive numbers with 15 walks compared to nine hits in 65 at bats. Brown was moderate defensively, but not as efficient as Rodriguez or Pena and primarily played third base despite being drafted as a short stop.

Second round pick Yordys Valdes was drafted largely for his defense, but struggled on both sides of the ball early on. He ended the season on a bit of an upswing with four extra base hits in his final ten games although his defense also dipped during this span.

Made takes a hack at a pitch during a 2019 AZL Indians Red game. – Joseph Coblitz, BurningRiverBaseball

While Sammy was a bit wild, the wildest Vasquez was Wardquelin. The 18 year old also split time between starting and relieving, but managed just 14.2 innings this year, largely due to a 14.7 BB/9. He finished the year with an ERA above 10.00 and a WHIP above 3.00.

Behind only Yainer Diaz, Marlin Made was second on the team in home runs this year with four, but that was the only good thing about his season. His 55 wRC+ was one of the worst in league history among qualifiers, placing him as the 6th worst hitter in the league in 2019. He struck out 45 times in 46 with just four walks. While primarily a center fielder, he is not such an amazing defender that you can look beyond his bat and he provides zero value on the bases.