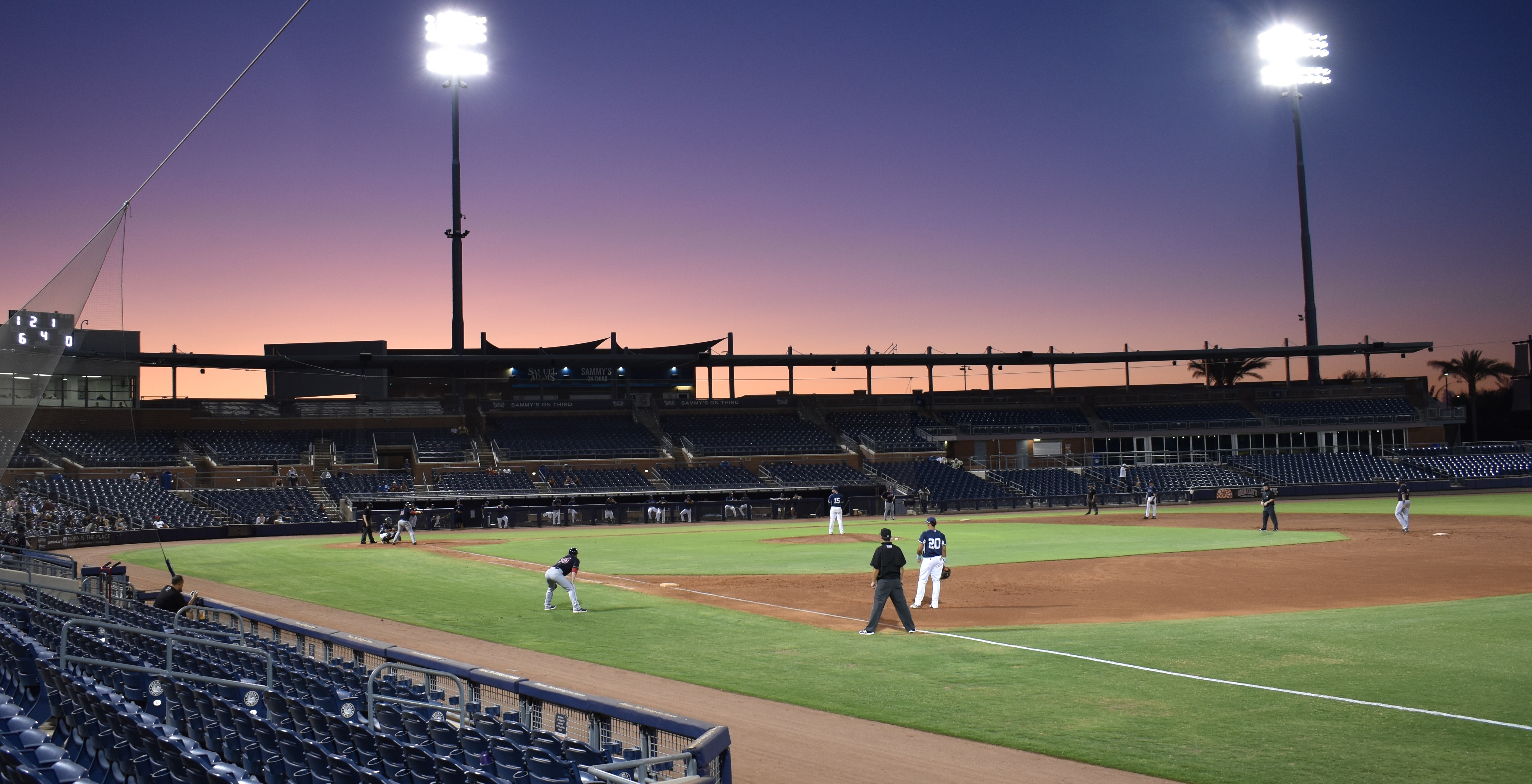 Following the victory over Athletics Gold on Tuesday, the Arizona League Indians Blue headed to Peoria, Arizona to take on the second best team in the AZL in 2019, the Padres 2.

Starting this semi-final game were Indians ace Luis D. Garcia and Alexuan Vega for San Diego. Both pitchers are in their second season in the Arizona League, although Garcia had the significant statistical advantage. Over his last four appearances, he had went at least six innings in three and allowed three total runs in 24.1 innings.

This game would end up being the second best of the season for Garcia, trailing only his July 12th appearance against Indians Red. After allowing a walk and a single in the first and another single in the second, he finished out five innings without allowing another walk or hit and struck out seven total.

Garcia warms up in the Peoria Sports Complex bullpen prior to his 2019 AZL play-off game start. – Joseph Coblitz, BurningRiverBaseball

The Indians defense wasn’t quite as perfect as it was on Tuesday against A’s Gold when neither team had an error, and Jose Colina completely whiffed on an infield pop up in the third, making Garcia’s life a little tougher. Jesus Maestre also booted a routine play in the sixth with Jared Janczak on the mound, leading to the Padres only run of the night. Other errors were committed by Jose Tena and Janczak later in the game, but ultimately caused no harm.

Wacky shenanigans at the AZL playoffs

The Padres, however, were made to pay for their four errors as the Indians scored 12 runs (7 earned) on 16 hits and eight walks. It started in the second with a Yeison Santana error at short that was followed by a Victor Nova double and Michael Amditis single. This lead to an early exit for Vega and the first three Indians runs, two of which were unearned. After adding two more in the third, things got fairly wacky in the fourth when Tena reached on an error, went to third on a passed ball on a walk, then scored on a strike out of Jhonkensy Noel when the catcher threw to second to try to get Cristopher Cespedes stealing.

In the seventh, the rout was on as the first four hitters all reached including an RBI single by Amditis, his third of the night and fourth of the post season. Cespedes added a free RBI when he was hit with the bases loaded, then Noel took the less painful RBI with a bases loaded walk. A Jose Colina single knocked in the final two runs of the inning to give Blue five runs in the frame and 11 overall. The Padres bullpen continued to struggle with control in the 8th and, following two walks, Pedro Alfonseca drove in the final run of the game with a single.

With an extremely lengthy final three innings, the lightning show that had been playing out far to the north had enough time to reach the stadium and in the middle of the ninth the game was delayed. It didn’t take too long after the lightning for the wind to arrive and with it a torrential downpour that quickly lead to the cancellation of the rest of the ninth as the Indians left Peoria victorious.

In the game, Tena, Amditis and Jothson Flores all had three hits while Nova had three walks and a hit. Both Flores and Nova scored three runs. While the Padres used five different pitchers, the Indians used three for the second game in a row. Following Garcia’s five shut out innings, Janczak went 2.2 allowing three hits and one unearned run, striking out four without a walk. Joel De La Cruz was used to finish the eighth and would likely have pitched the ninth had it been necessary. There was a runner on second that De La Cruz stranded in the eighth.

Now that they have advanced to the championship round, Indians Blue will take on the Rangers, who also upset the favorite in their game when they beat Giants Orange. Because the Indians have the better record, games one and three (if necessary) of the best of three series will be played in Goodyear, Arizona with game two being played at Surprise Stadium. All games will be at 6 PM Arizona time and will likely be played on backfields. They are currently scheduled for August 29th (Goodyear), August 30th (Surprise) and August 31st (Goodyear, if necessary).

This is the Indians first trip to the championship round in the Arizona League since they won the whole thing in 2014.