Grim loss to Jets, but Eagles get some answers 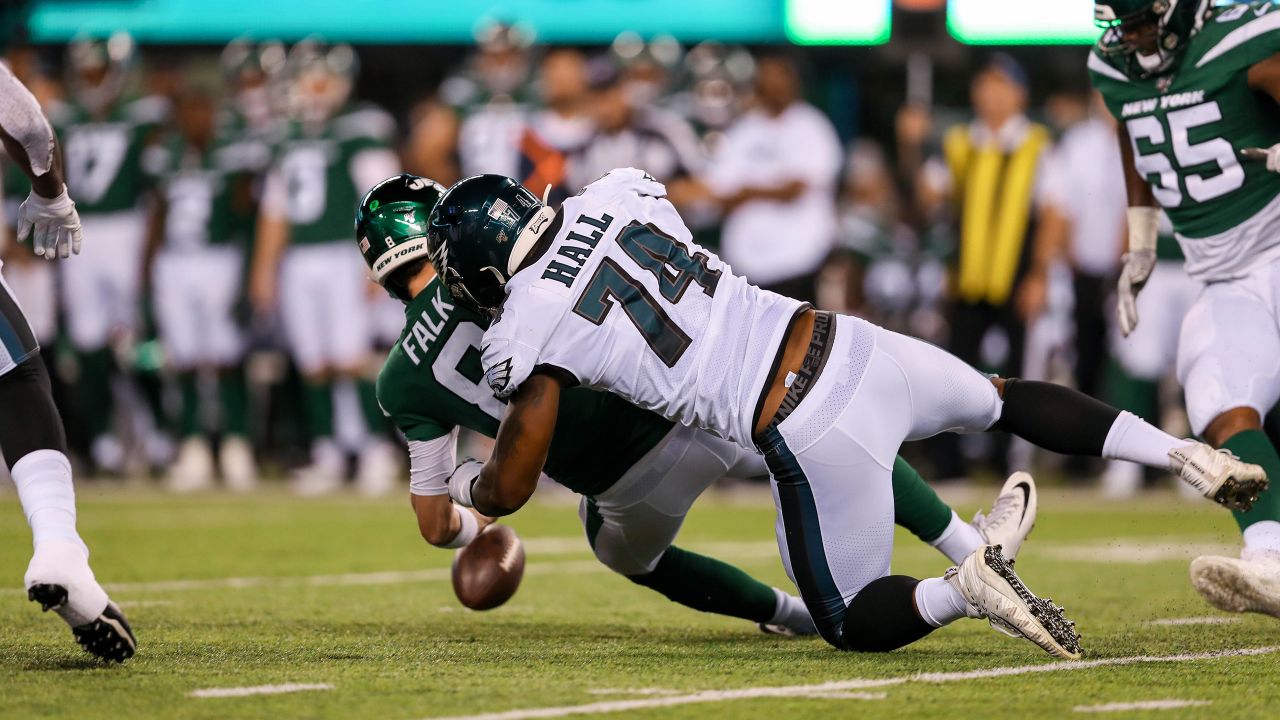 Grim loss to Jets, but Eagles get some answers

Clayton Thorson had his season in the sun a week ago…now not so much.

As good as he was against the Ravens last week, he was equivalently horrible this week against the Jets’ backups.

Maybe it’s a thing where the coaches kinda knew beforehand that the kid would regress based upon his lack of front-line protection in this mercifully final PS game of 2019?

Maybe they wanted to see how he held up under adversity?

Might have been an even worse night for the Jets kicker…

Taylor Bertolet kicked two field goals for the game’s only scores, but missed three other attempts in his bid to make New York’s roster as the Jets topped the Philadelphia Eagles 6-0 in a snoozer of a preseason finale Thursday night.

Bertolet was wide right on a 53-yard field-goal attempt early in the first quarter, but made a 23-yarder early in the second. Marcus Cooper’s interception of Eagles rookie Clayton Thorson helped set up the scoring drive. Bertolet was wide left on a 56-yarder just before halftime. His 39-yarder gave the Jets a 6-0 lead with 5:10 left in the third quarter. Bertolet then missed a 49-yarder with 9:40 remaining.

Thorson, a fifth-rounder out of Northwestern, played the entire game for the Eagles (1-3). He finished 12 of 26 for just 84 yards and an interception. Even some of his completions required major adjustments by his receivers. It wasn’t pretty.

Welp, maybe that crappy piece of tape makes it possible to stash Thorson on the PS10? I simply don’t buy into the liberal-left theory that Howie and Co. “ordered” Thorson to tank this one. That makes no sense to me. If anything, Thorson was probably over-thinking, over-stressing. EYE think he knew what was on the line and how many teams in this league would be watching his every move and he sorta kinda choked. And you know what?— that just proves these guys are human beings. If the Eagles think he deserves another chance, then he will get either a roster spot modified by some other player’s injury status, or a PS10 assignment. If they don’t, then he will be flat-out released.

Trevor Siemian started at quarterback for the Jets with Sam Darnold and New York’s starters getting the night off. With the backup job wrapped up, Siemian went 5 of 5 for 37 yards in his only series before giving way to Luke Falk.

Falk finished 13 of 18 for 91 yards in five series, and has basically outplayed Davis Webb during training camp and the preseason for the potential No. 3 job.

Webb played the entire second half and went 18 of 23 for 176 yards and was intercepted twice — by Josh Hawkins and Chris Worley.

One of the biggest highlights of the exhibition for the Eagles was the play of DE Daeshon Hall. He (despite being cleared from concussion protocol during the game) put on a desperate show of strength and agility…and “want to”….

A Jets’ highlight we can take from this one with understanding: Former Australian rugby league star Valentine Holmes, in camp with the Jets as a running back/wide receiver, had a busy second half. He had five receptions, tying for the team lead, for 55 yards, and ran the ball five times for no yards. Holmes also had a tackle on Worley’s interception. The 24-year-old Holmes is with the Jets as part of the NFL’s International Player Pathway program. If he doesn’t make the Jets’ 53-man roster, he’s eligible for a practice squad exemption — meaning he wouldn’t count against the team’s allotment of 10 non-active roster players during the regular season.

Another perplexing performance from the Eagles’ standpoint: What are we gonna do with Wendell Smallwood?

Philadelphia was driving down the field on its second possession behind runs of 15 yards by Greg Ward and 18 by Wendell Smallwood that got the Eagles down to the Jets 24. But rookie Blake Cashman popped the ball out of Smallwood’s hands on second-and-8 from the 22 and Frankie Luvu recovered and returned it 24 yards. It ended what turned out to be the Eagles’ best scoring chance of the night.

EYE think that was only Smallwood’s 3rd official fumble in his NFL career.  So I was shocked by the majority-rules cynical reaction of the Philly media, to wit, “well, so much for his chances to make this team.”

Fact is, Smallwood ran well and averaged 7 yards a carry at one point… Hey, you’d fumble too if you were blindsided by a future bouncer.

INJURIES: Eagles: DT Aziz Shittu was being evaluated for a head injury after being hurt early in the second half. Hated to see it, he was having a whale of a game.