The Last 5: Georgia vs. Vanderbilt 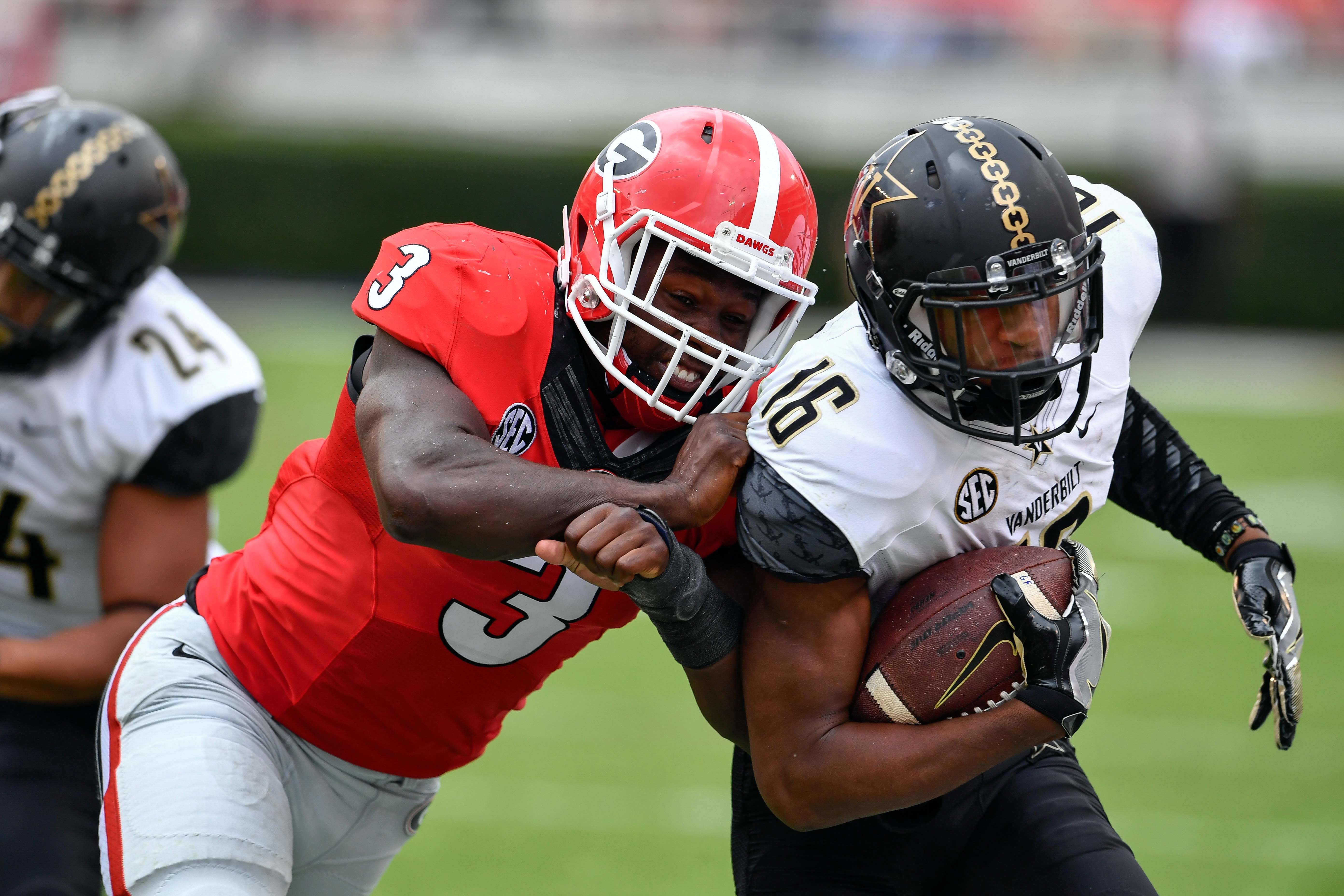 The Last 5: Georgia vs. Vanderbilt

After back-to-back 7-point losses to close the 2018 season, No. 3 Georgia will look to begin its fourth year under head coach Kirby Smart on the right foot.

The Bulldogs will kick off 2019 and SEC play on Saturday night as they head to the Music City to take on Vanderbilt. Georgia nearly returned to the College Football Playoff last season, but watched a 28-14 lead evaporate in the SEC Championship against Alabama before falling to Texas in the Sugar Bowl.

Vanderbilt, led by sixth-year head coach Derek Mason, reached a bowl game last season, but fell to Baylor to finish 6-7. The Commodores have not had a winning season under Mason and none as a program since a 9-4 finish in 2013.

Who: No. 3 Georgia Bulldogs (0-0) at Vanderbilt Commodores (0-0)
When: Saturday, Aug. 31 at 7:30 p.m. ET
Where: Vanderbilt Stadium in Nashville, Tennessee
Network: SEC Network
What’s at Stake for Georgia: As a projected national title contender, Georgia cannot afford to lose to Vanderbilt. A loss would also drastically shrink the Bulldogs’ margin for error in the SEC East.
What’s at Stake for Vanderbilt: Beating Georgia would undoubtedly be the signature win of Derek Mason’s tenure and could vault Vandy into the top 25.

Vanderbilt 13, (2) Georgia 41
Oct. 6, 2018
Jake Fromm passed for 276 yards and three touchdowns as the Bulldogs easily defeated Vanderbilt to kick off October 2018. The Bulldogs put up 560 yards of offense in the victory.

(5) Georgia 45, Vanderbilt 14
Oct. 7, 2017
Sony Michel and Nick Chubb combined for 288 yards on the ground and three touchdowns while Georgia rushed for 423 yards as a team. Jake Fromm threw a pair of touchdowns for the Bulldogs in the win. Vanderbilt’s Kyle Shurmur passed for 172 yards and a score.

Vanderbilt 17, Georgia 16
Oct. 15, 2016
Georgia put up 421 yards to just 171 for Vanderbilt in the mid-October contest in 2016, but the Commodores somehow found a way to emerge victorious. Khari Blasingame’s touchdown run with less than 10 minutes to go put Vandy ahead for good in the contest. Georgia’s Jacob Eason passed for 346 yards in the loss, but Vanderbilt stuffed Isaiah McKenzie on 4th-and-short in the final minute to secure the victory.

(10) Georgia 31, Vanderbilt 14
Sept. 12, 2015
Georgia opened SEC play in 2015 on the right foot, thanks to the help of two non-offensive touchdowns. After Isaiah McKenzie returned a punt 77 yards for a touchdown to get the scoring started in the first quarter, Dominick Sanders put the exclamation point on the victory with an 88-yard interception return for a touchdown with 1:11 to play. Nick Chubb rushed for 189 yards for the Bulldogs. Vandy’s Johnny McCrary passed for 295 yards and a touchdown, but was intercepted three times.

Vanderbilt 17, (13) Georgia 44
Oct. 4, 2014
Georgia set the tone in the 2014 contest against Vanderbilt in Athens with 21 first-quarter points and never looked back. Running back Todd Gurley rushed for 163 yards and two touchdowns for Georgia in the win. Devin Bowman also returned an interception 63 yards for a touchdown for the Bulldogs.