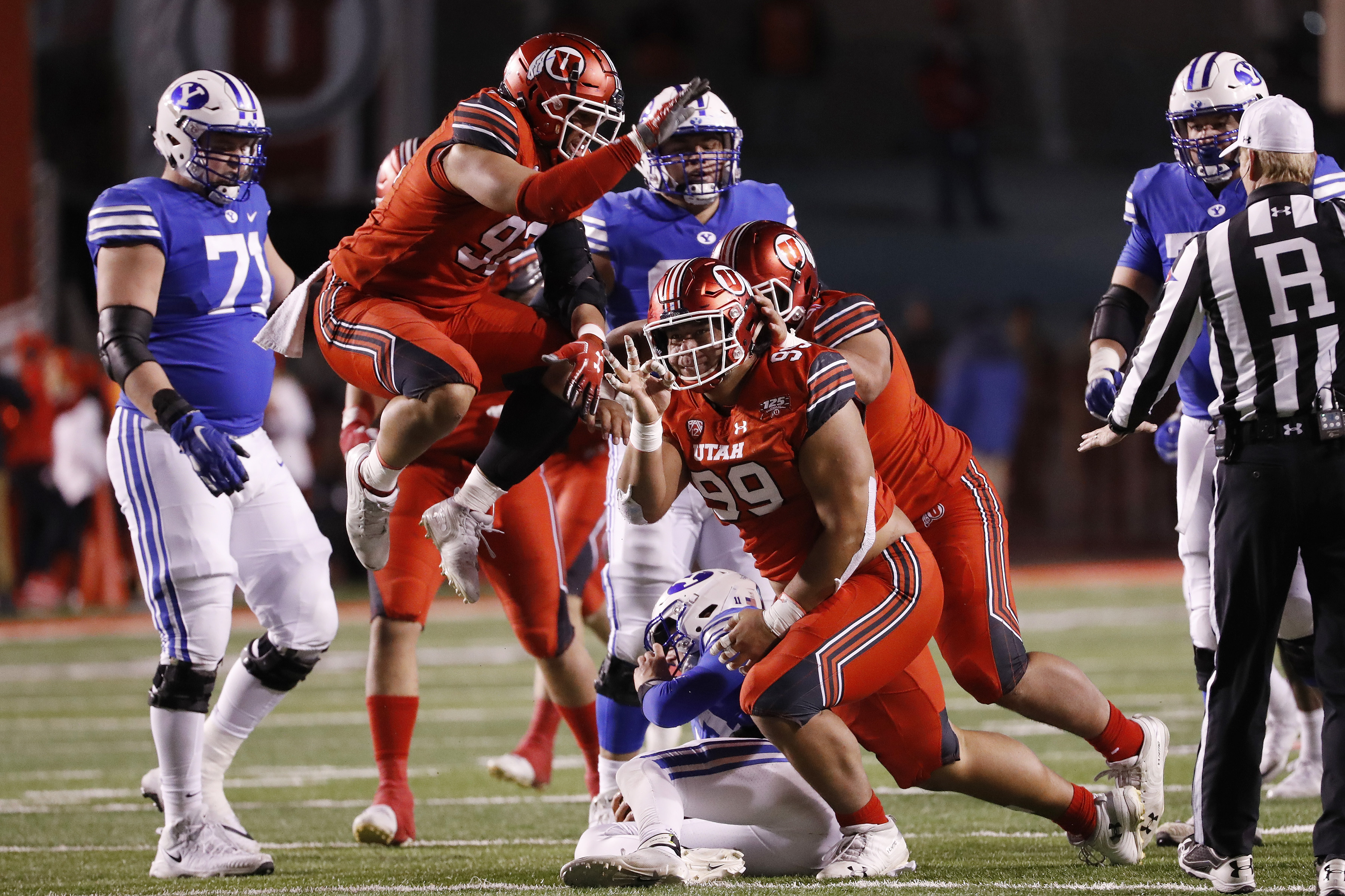 The season opener for two of Utah’s three FBS teams should be a war — a Holy War.

No. 14 Utah and BYU will kick off the season against one another on Thursday night in Provo. The Utes reached the Pac-12 title game last season en route to a 9-5 finish and are a popular pick to win the conference this year.

Under head coach Kyle Whittingham, who enters his 15th year as head coach, Utah has had five straight winning seasons. BYU is 20-19 in three seasons under Kalani Sitake and coming off a 7-6 campaign.

Who: No. 14 Utah Utes (0-0) at BYU Cougars (0-0)
When: Thursday, Aug. 29 at 10:15 p.m. ET
Where: LaVell Edwards Stadium in Provo, Utah
Network: ESPN
What’s at Stake for Utah: In-state bragging rights is always at stake when Utah and BYU play, but with a loss, the Utes could fall out of the polls.
What’s at Stake for BYU: The Cougars have not beat Utah since 2009. Winning on Thursday would be an enormous victory for Kalani Sitake.

BYU 27, (17) Utah 35
Nov. 24, 2018
Trailing 27-14 after three quarters, Utah used two fourth-quarter touchdown runs from Armand Shyne and another from Jason Shelley to win its eighth straight game over BYU. Julian Blackmon also returned an interception 27 yards for a touchdown in the victory. BYU quarterback Zach Wilson passed for 204 yards and two touchdowns and rushed for 73 yards in the loss.

Utah 19, BYU 13
Sept. 9, 2017
Utah quarterback Tyler Huntley passed for 300 yards and rushed for the team’s only touchdown as the Utes held off BYU early in 2017. Matt Gay made four field goals in the victory. The Utah defense held BYU to 223 yards of offense and intercepted Tanner Mangum three times.

BYU 19, Utah 20
Sept. 10, 2016
The Utah defense set the tone with a 41-yard interception return for a touchdown by Sunia Tauteoli on the first play of the game and came up big late with the game on the line. After BYU quarterback Taysom Hill rushed for a 7-yard touchdown to cut the lead to one with 18 seconds to play, the Utes stuffed Hill on the 2-point conversion attempt. Tauteoli had two interceptions, but it was Utah that turned the ball over six times in the victory. Kai Nacua had two interceptions for the Cougars.

BYU 28, (22) Utah 35
Dec. 19, 2015 (Las Vegas Bowl)
The Holy War was discontinued for the 2014 and 2015 seasons, but Utah and BYU wound up meeting in a wild Las Vegas Bowl to conclude the 2015 season. Utah raced to a 35-0 lead after one quarter, thanks to two interception returns for touchdowns and a pair of touchdown runs from Joe Williams. That would be the last time the Utes scored as the Cougars stormed back with the game’s final 28 points. BYU’s Tanner Mangum atoned for three interceptions with 315 yards passing and three total touchdowns. Utah was able to run out the final 3:23.

Utah 20, BYU 13
Sept. 21, 2013
The teams combined for 845 yards in the 2013 edition of the Holy War, but the defenses managed to bend without breaking. Travis Wilson passed for 273 yards and two touchdowns in the victory. Taysom Hill accounted for 359 total yards for BYU. An interception by Utah’s Michael Walker helped seal the victory late.