Delaware continues its dominance over Delaware State in Route 1 Rivalry 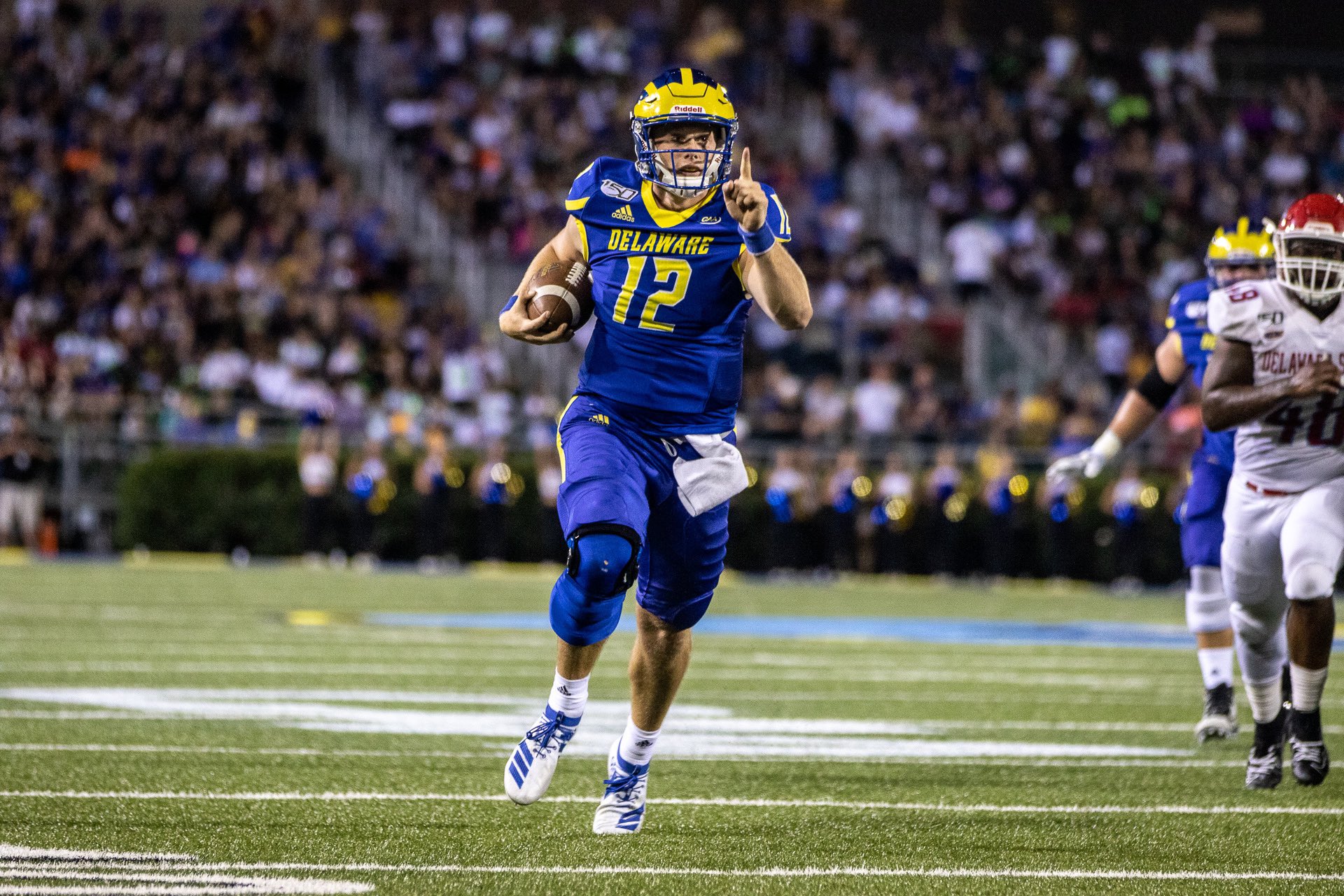 Delaware continues its dominance over Delaware State in Route 1 Rivalry

The Delaware Blue Hens remained undefeated in The Route 1 Rivalry on Thursday night, defeating in-state rival Delaware State 31-13 for their ninth consecutive victory over the Hornets.

The Route 1 rivalry began in 2007 and will continue through the 2030 season. The last time these two teams played each other was in the 2017 regular-season opener.

In that game, the Blue Hens dominated the Hornets on both sides of the ball, en route to a 22-3 victory.

Going back to Thursday’s night game, Delaware State held their first lead in the series (6-3) over No. 22-ranked Delaware early in the second quarter.

However, the Blue Hens found their rhythm and took a commanding 25-6 lead after the third quarter, allowing most of their starters to rest and enjoy the season-opening victory.

“We’re very happy to have found a way to win the game,” said University of Delaware head coach Danny Rocco in his post-game press conference.

“In hindsight, it probably wasn’t the worst thing for our team to be in a competitive game at halftime and have to come out of the locker room in the second half and perform.”

Leading the Blue Hens was redshirt senior and second-year starting quarterback Pat Kehoe, who put on an efficient passing performance against Del. State.

The 6-foot-4 southpaw completed 64.3 percent of his passes for 186 yards and two touchdowns. He also had 30 rushing yards and a touchdown on the ground.

Kehoe’s first touchdown of the night came on a twenty-one-yard quarterback power in the second quarter. The Blue Hens pulled their guard and kicked out Delaware State’s edge, which allowed the redshirt senior to walk into the end zone.

“Our scheme worked well. They flowed with the motion and there was nobody left. Our pullers did a great job kicking out and it was open daylight,” Kehoe said.

Along with Kehoe, redshirt sophomore wide receiver Thyrick Pitts had a career day in his first start for the Hens.

The 6-foot-2 wideout scored his first career touchdown late in the third quarter on a back-shoulder throw from Kehoe, giving Delaware a commanding 25-6 lead over the Hornets.

Pitts hauled in a team-high six receptions for 81 yards and was a dominant presence inside the red zone for the Hens.

“He [Pat] got the ball out and our receivers had a really solid day. Thyrick had an outstanding day and other guys played well,” said Rocco.

Delaware State, however, did not have an outstanding day, as they lost starting quarterback Shayne Smith in the second quarter to a broken thumb.

With Smith going down, the Hornets turned to true freshman Tylik Bethea who completed 55.5-percent of his passes for 137 yards and a touchdown on Thursday night.

Smith is expected to miss at least the next few games, which means Bethea will be the Hornets starting quarterback going forward.

“This young man graduated in December of last year and joined us in January,” said Delaware State head coach Rod Milstead of Bethea.

“He’s already gone through spring ball and now a full training camp. He played in our spring game and did a good job, so we knew what he could do.”

Despite it being Bethea’s first collegiate game, Milstead was impressed with what the young signal-caller was able to do and sees a bright future for him.

“He showed us today that he’s up for the challenge and we’re expecting big things. He’s a 6-foot-5 quarterback with a strong arm and he’s only going to get bigger and stronger,” Milstead said.

Despite the opening night loss, Delaware State showed a lot of potential against an established University of Delaware program.

Delaware’s history of dominance in this series and the expectations for the Blue Hens this year made it a difficult task for Delaware State to overcome.

That being said, the Hornets will not play a team ranked as high as Delaware for the rest of the season, leaving room for improvement.

“Our team is young. It’s going to take a while for this group to get to where it needs to go, and we knew that going into this football game,” Milstead said.

“We’ve got to grow up fast, rally around our new quarterback, and be able to put the ball in the end zone. I’m not proud of our rushing game being an offensive line guy. We’ve got to get better rushing the football.”

The Hornets only mustered 123 yards on the ground, in comparison to what the Blue Hens were able to do (209 yards). However, Milstead believes that he has something in the passing game with Bethea.

“I think we found something tonight in our passing game that helped us out. We’ve got a quarterback who can get the ball downfield, but we didn’t do a good job rushing the ball.”

Nevertheless, Delaware State will have an extra week to prepare Bethea for his first collegiate start with a bye week upcoming. They’ll return to action on Sept. 14 in another non-conference game at home against Lincoln University.

“We’ll get ready for Lincoln coming into our place for our home opener. It’ll be the first time our quarterback gets the opportunity to start and we’re looking forward to him doing big things,” Milstead said.

In terms of the Blue Hens, they will play their first CAA game next weekend as they travel to the University of Rhode Island.

Last season, Delaware opened up their season against URI and lost 21-19. The Blue Hens had this season’s matchup on their mind throughout the offseason.

“We have twelve different one-game seasons and we’ve got to treat them equally important. But it’s kind of a revenge game and we’ve got to go up there and handle our business next week,” said Kehoe.