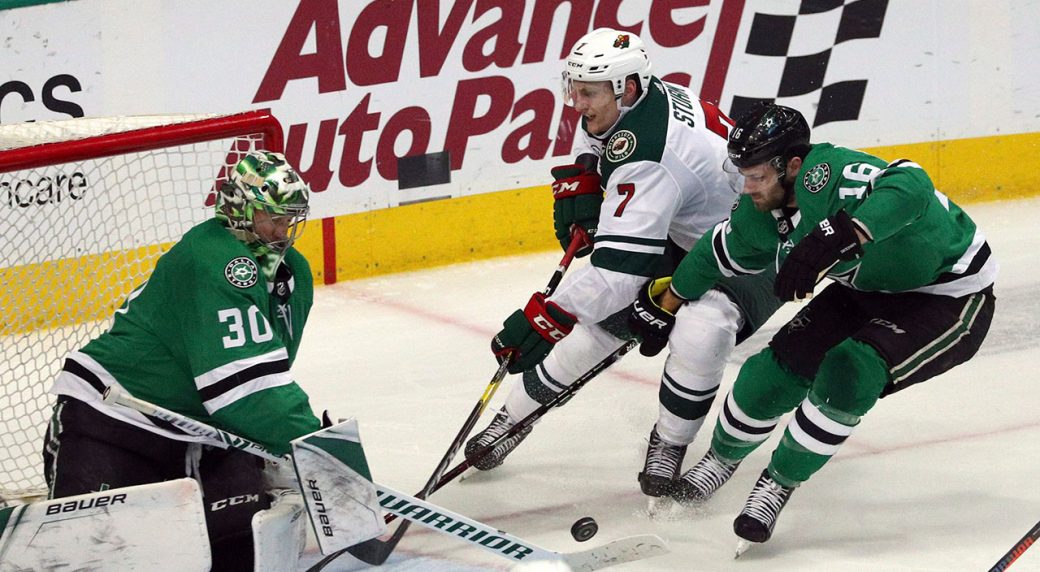 When people are looking for signs that the fall season is about to arrive, they often look for the leaves changing color and the temperatures to start to steadily drop.  For Minnesota Wild fans, one can know training camp is near when the young players compete in the annual prospect tournament in Traverse City, Michigan which will begin September 6th through September 10th.  The Minnesota Wild have been attending the tournament for over a decade.  Over 600 NHL players have performed in this tournament, created and hosted by the Detroit Red Wings 21 years ago and has been one of the best events of its kind ever since.

The Wild’s team of NHL hopefuls will be in the ‘Ted Lindsay Division’ competing against prospects from the Dallas Stars, Columbus Blue Jackets and the New York Rangers.  Meanwhile, the Detroit Red Wings, Chicago Blackhawks, St. Louis Blues and Toronto Maple Leafs make up the ‘Gordie Howe’ Division.  You can see most of the respective team rosters by clicking the above links.  The Wild will compete within its division in a round robin style format and depending on how well they do they’ll get a chance to play for the tournament championship and the Matthew Wuest Memorial Trophy (Wuest was the creator of the popular website CapGeek.com which is the precursor to today’s CapFriendly site), 3rd place, 5th place or 7th place.  Unfortunately, the Minnesota Wild do not appear to be streaming the games.  Yet, some of the other clubs participating might stream them so you might want to check their respective team websites.  Here is the schedule (all game times are in listed in Central Standard Time).

To my recollection, the Wild have never finished in 1st place in this tournament.  The Wild coaching staff for this tournament will be headed up by Iowa Wild bench boss Tim Army as well as assistant coaches Brett McLean and Alex Tanguay.  Army has shown he is a good motivator of players and can get them to play at a level where his teams regularly outwork their opponents.  No doubt newly minted Wild General Manager Bill Guerin will be watching closely and trying to get an idea as to what a fair portion of Minnesota’s prospect pool is capable of.

This year’s entry by the Wild is one of their less ‘star’ studded groups, especially when you compare it to some of the other clubs in the tourney.  With no first round picks on its roster and a blueline that doesn’t have a lot of offensive punch as its leaning on a large amount of invitees to carry the load they will face an uphill challenge to finish near the top of the Bill Lindsay Division.

Undrafted college free agent Nico Sturm will have an excellent opportunity to demonstrate that he’s worth a long look at NHL training camp when it begins the week after the tourney.  The Clarkson University product earned high praise for his play and leadership at the Wild Prospect Development camp this summer and one would expect him to be one of Minnesota’s standouts no matter how well they do.  Another impact player in this tournament should be skilled sniper Dmitry Sokolov.  Sokolov has a year of professional hockey under his belt and he is hoping to play in a bigger role in Iowa’s attack.  He is probably this team’s most dangerous scorer in the tournament.  Will Bitten is another Iowa farmhand playing in the tournament and his high energy game will be a good example for the other prospects to follow.

Other prospects to keep a close eye on would be Connor Dewar, Ivan Lodnia, Brandon Duhaime, Fedor Gordeev and Mat Robson as they are all players who have shown what they can do at the major junior or the college level and now are looking to make that jump to the professional ranks (most likely in the American Hockey League) with Iowa.  The team will be without the talented Alexander Khovanov who is recovering from surgery on a benign bone tumor in his left leg.  Khovanov was another player who had a terrific development camp this summer and that skill will be missed.

Another area of interest is between the pipes where former Golden Gopher Mat Robson is trying to demonstrate he’s ready for a backup role in Iowa, while Hunter Jones will likely get an opportunity to show he may be Minnesota’s goalie of the future.  Here is the rest of the roster.

How well do you think the Minnesota Wild prospects will fare in Traverse City this year?  Which prospects are you going to be watching for?  Let us know on Twitter @CreaseAndAssist or in the comment section below!