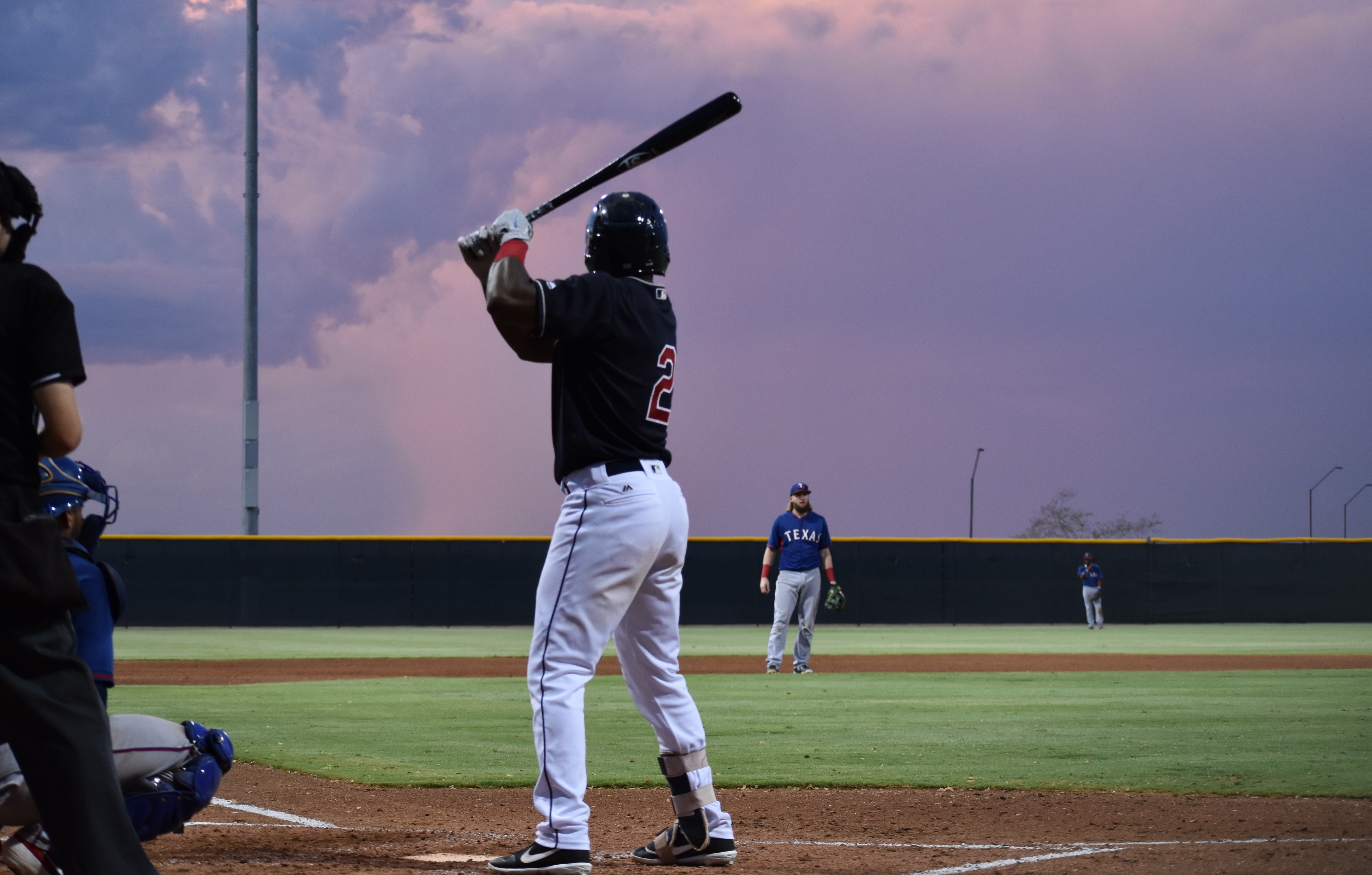 Following their underdog wins at Giants Orange and Padres 2, the Arizona League Rangers and Indians Blue met for a best of three series to decide the 2019 AZL championship. With the better record of the two, the Indians hosted game one at the Indians development complex in Goodyear, Arizona on August 29th.

Having burned through their top starter (Luis D. Garcia) and top relievers (Jordan Jones, Randy Labaut and Jared Janczak) to get to this point, Indians Blue put the game one start in the hands of Daritzon Feliz, who was either fantastic or terrible nearly every outing in 2019.

Feliz makes the start against the Rangers in the first game of the 2019 AZL championship. – Joseph Coblitz, BurningRiverBaseball

This start would wind up in the middle of the road for Feliz, who pitched well at times, but was hurt by his defense. He allowed one run to score in the second on a walk and a hit then another in the second on a double and a sac fly (video below).

While these were more or less entirely on Feliz, he quickly retired the first two in the fourth before things got out of hand. Cody Freeman singled, then Victor Nova misplayed a ground ball in left to allow him to score. The next play was ruled a single and an error, but could have been considered an error all the way as Jose Tena bounced a throw to Jose Colina that allowed Reynoldo Pichardo to score from second. This was the fourth and final run scored on Feliz who allowed five hits and one walk in his 4.1 innings.

Kevin Kelly was solid in relief, going 1.2 perfect with three strike outs, but the Rangers blew the doors off in the seventh when they bunted three straight times to start the inning, then hit two straight fielder’s choices to third, leading to two more runs and ultimately scoring five in the inning off Chandler Fidel.

The Indians managed just two hits during the game, one of which was a single by Tena who was immediately caught stealing. The other was a double by post-season All-Star Cristopher Cespedes. Despite scoring 18 runs in the previous two play-off games, team Blue was shut out and the final score was 10-0.

Amditis slides to the right to block an errant throw with Freeman at the plate. – Joseph Coblitz, BurningRiverBaseball

Jhonneyver Gutierrez got the start on Friday against Florencio Serrano and the best of three series was over almost immediately. After striking out Keithron Moss to start the game, Gutierrez allowed a walk, two doubles, another walk and a single before being pulled from the game after recording just two outs. In relief, Nate Ocker allowed a single and the fifth run of the first, a number that would represent the winning difference in the end.

Ocker allowed another run in the second on a Heriberto Hernandez home run, but in the end would go 3.2 innings, allowing two earned runs on four hits with two strike outs. His other run came on a triple and a sac fly in the fourth.

The Indians came back with runs in the third and fifth, each time thanks to a start from Pedro Alfonseca. He hit a triple in the third and scored on a Victor Nova single, then singled in the fifth, moved up on a Nova walk and a Jose Tena single and scored on a fielder’s choice. These would be the only two runs scored for the Indians during the entire championship series.

Despite the disappointing finish for Indians Blue, it was still the best any Indians team has performed since 2014. Given the make-up of this team, I expect nearly every member to graduate from the roster in one way or another by next season.