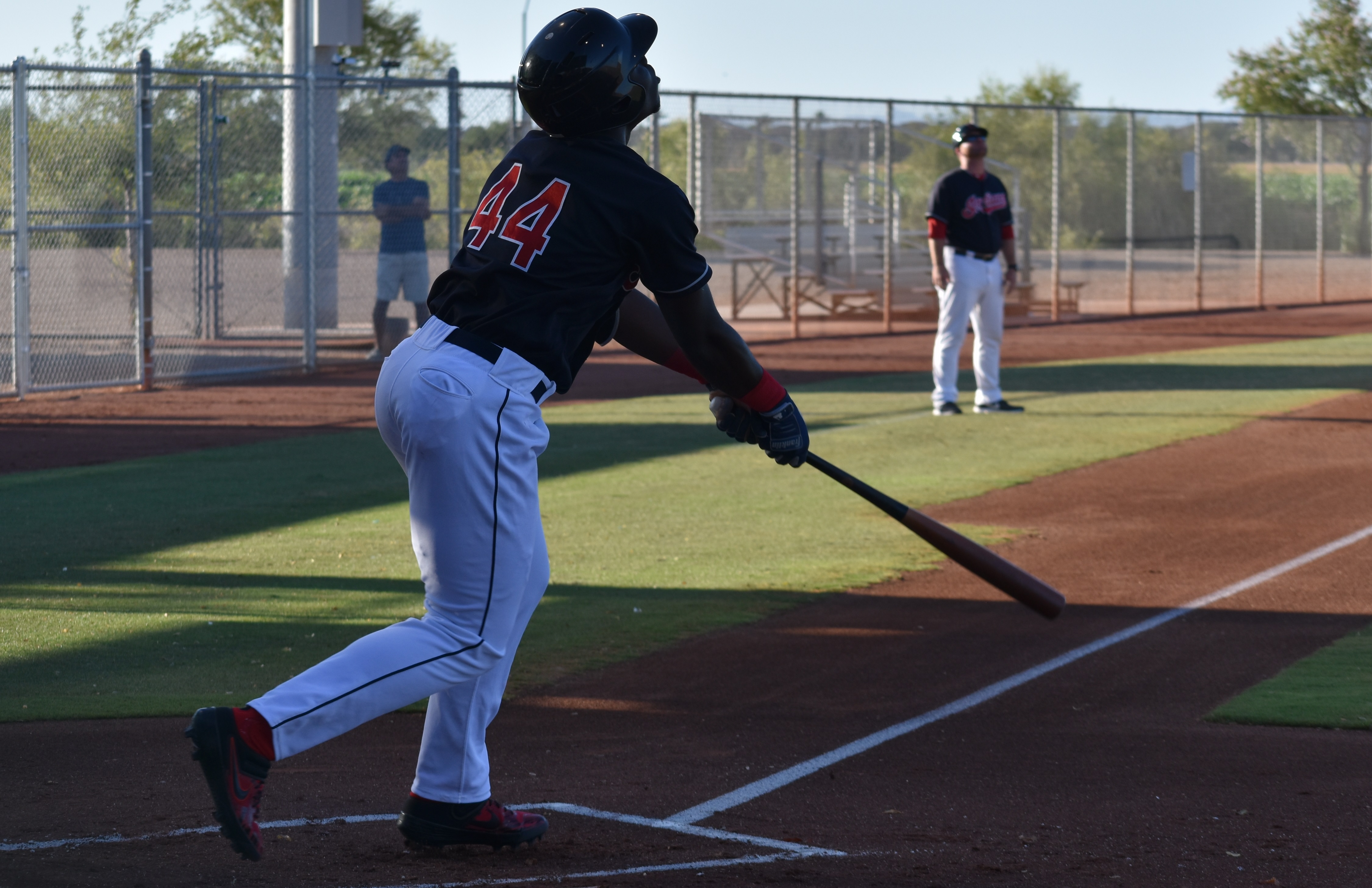 For the second consecutive season, Indians Blue (formerly Indians 2) made the play-offs despite being an extremely young team and this season, despite losing a large amount of players through promotion to Mahoning Valley. Among the early call-ups were top starter Hunter Gaddis, top reliever Nick Mikolajchak and first half MVP candidates, Julian Escobedo and Will Brennan. Despite this, they finished third in overall record after earning a play-off spot for their first half divisional win. They then won their first two play-off games before being swept by the Rangers in the championship round.

With many stand out players on offense and many who didn’t play the whole season with the team, it is difficult to name just one MVP. However, one man did play the whole season, came in second on the team in home runs (6) and doubles (12) and did so largely as a 17 year old (he turned 18 on July 15th). That man was Jhonkensy Noel.

While not the biggest name on the team, he was the biggest man (I have to greatly question his official numbers of 6’1″, 180 lbs). Noel has prodigious power to all fields, wasn’t afraid to walk and didn’t strike out as often as the other power hitters. He also was an excellent defender at first base and a decent one at third (he played mostly at first during the first half of the season and third during the second half), although his glove work lags behind his arm strength. Noel is a special talent and everyone should know about him.

Three players stick out to immediately follow Noel as top offensive performers, although all three missed part of the season with team Blue. Aaron Bracho had a tremendous batting line of .296/.416/.593, but missed a month with a leg injury. His defense was also suspect, despite being moved from short stop to second base. In addition to having great power, his 23/21 BB/K ratio was very good. He was considered the Indians top international signing in 2017 for a reason, although it has taken him until this year to actually show it on the field.

Speaking of walks and strike outs, Julian Escobedo and Will Brennan put together some crazy numbers this year. Escobedo had 18 walks to 12 strike outs in 125 plate appearances while Brennan made him look like a free swinger as he struck out six times in 140 plate appearances (15 walks). Both played a fine defensive center field and either would have been considered MVP over Noel had they not been promoted to Mahoning Valley as early as they were. Escobedo had the slight edge over Brennan, adding eight steals in nine attempts and a .495 slugging percent.

In addition to the offensive performances, there were so many great pitchers on team Blue that it is impossible to give them all their due justice here. In the starting rotation, both staff ace Luis D. Garcia and Hunter Gaddis were brilliant with Garcia staying the duration of the season while Gaddis was called up to the Scrappers. Both had impeccable command with BB/9 at 2.0 or below while Garcia had the better ERA (2.58) and Gaddis the better strike out rate (13.5 per nine).

In the bullpen, Jordan Jones lead the way with 45 strike outs to nine walks in 37.1 innings, but Nic Enright had the best ERA at 0.50 through 18 innings. Nate Ocker also threw 18 innings in the AZL with a 15.5 K/9 and a 1.50 ERA while both Randy Labaut, Eric Mock and Kevin Kelly had a K/9 above 11.0 and an ERA below 2.75. Jones, Enright, Labaut and Kelly were all fantastic in post-season play as well, essentially pushing the team to the championship round on their own.

While this section is generally for those whose numbers didn’t back up their ability, this time I will use it to focus on a pair of players who performed very well, but are a bit old for the level. Jose Colina ended up leading the club in average and slugging percent by hitting .372/.443/.744 with a team high eight home runs. However, at 21, he’s significantly older than the average AZL player and this is his third season in the league after being cut by the White Sox last year. That being said, these are incredible offensive numbers for a catcher and he deserves another look at a higher level.

The team leaders in doubles (17), Cristopher Cespedes, is also 21 years old and playing in his third season in the AZL, although it is just his second full season. He has always been projected as a powerful corner outfielder, but didn’t fulfill that promise until this year. Because this success came against players so much younger than himself, however, it must be discounted severely.

On the younger end of the spectrum, Jose Tena had a very impressive season at 18 years old, improving on his numbers from his 2018 season in the Dominican Summer League. He’s an exciting middle infielder, although had some concentration issues on defense leading to an astounding amount of errors.

Other than a few players being older than you would generally want at this level, this team didn’t have any significant issues. However, one player to keep an eye on is left handed starter Daritzon Feliz. I can’t name a player who has been so extremely different from start to start as he can miss bats with the best of them, or get completely blown out as soon as a game starts. On a positive note, he dropped his walk rate by half and pitched much deeper into games compared to last year with the same team. However, he has been far from dependable. For example:

As you can see, there’s serious potential here, but also serious danger. By the rules of the league, he has to move on to Mahoning Valley next year, but it is hard to say that he is ready for the jump.