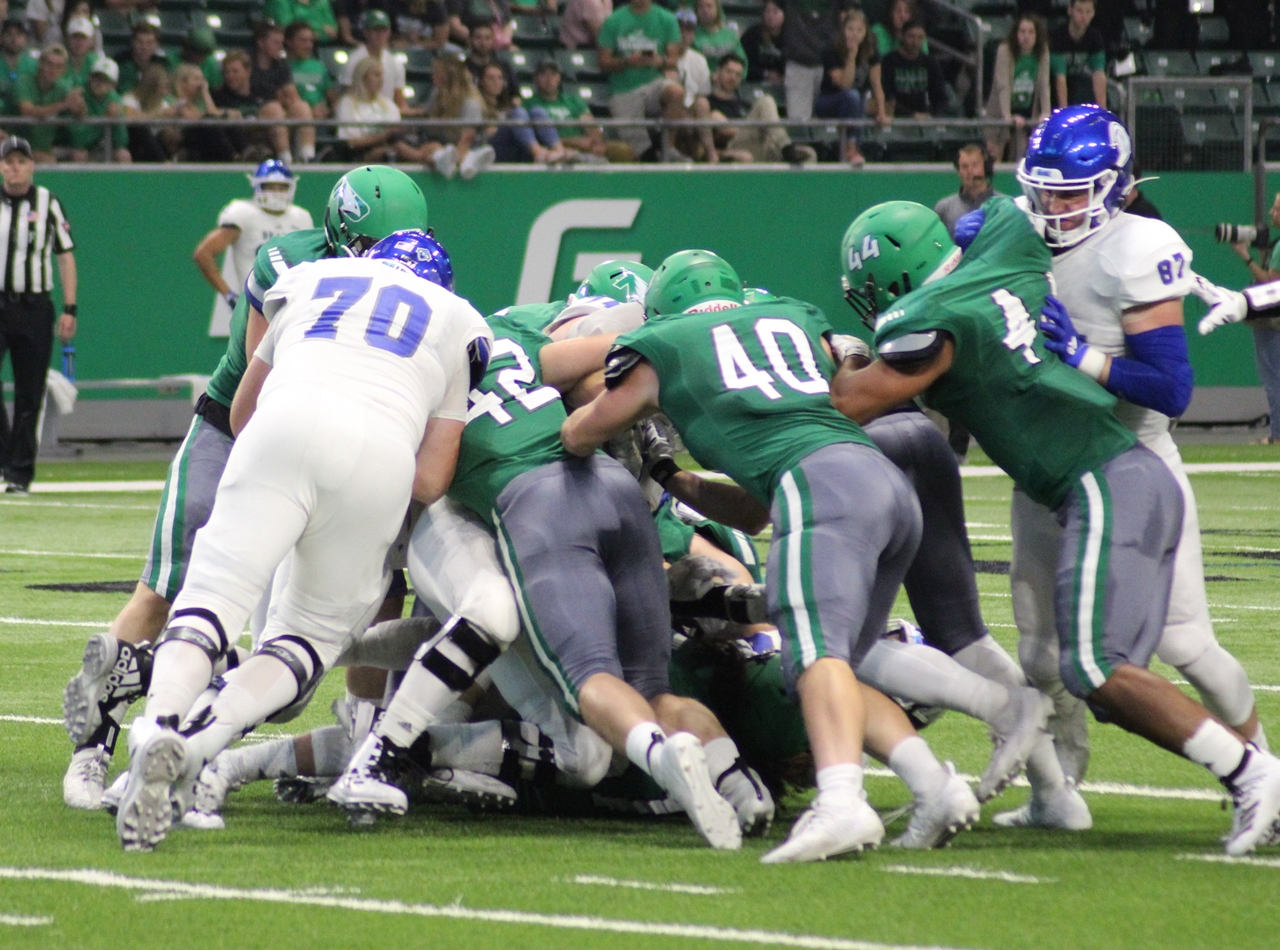 The University of North Dakota kicked off the 2019 season with an impressive 47-7 victory over Drake University. It was a game that the Fighting Hawks needed to win. Mission accomplished.

The win came with a high cost. Early in the third quarter, senior starting quarterback Nate Ketteringham suffered an apparent knee injury and left the game. He didn’t return and was seen wearing a knee brace on the sidelines. Ketteringham wasn’t putting a lot of weight on his leg. I was told, it’s not a season-ending but I would expect him to be out for a couple of weeks. We’ll find out more this week after he’s reevaluated. Ketteringham’s line: 19-for-25, 152 yards, two touchdowns, and zero interceptions.

Senior backup quarterback Andrew Zimmerman entered the game and on the first play threw a 19-yard pass to with Travis Toivonen. In the post-game press conference, Zimmerman said he didn’t warm up before entering the game. No warmup, no problem.

Like the UND hockey team, coach Bubba Schweigert has the next man up philosophy. With the Ketteringham injury, Schweigert had no intention of changing the play and going with something safe. “We called the play were going to call.”

Almost immediately, the offense responded positively to Zimmerman. The Hawks got the ball moving and scored three touchdowns in roughly six and a half minutes.  All in all, it was an impressive outing for Zimmerman in relief. The Monroe, Washington native went 7-for-9, for 132 yards, two touchdowns, and zero interceptions. Ketteringham or Zimmerman, it doesn’t appear to matter.

Even if Ketteringham is able to heal enough to play next weekend, I think that Zimmerman’s performance has earned him some more playing time. Is there a quarterback controversy? I don’t think so, both players are very capable.

It would appear that the Hawks players have responded positively to new offensive coordinator Danny Freund. Last season, I thought that the Hawks offense had become stale and very predictable. Fast forward to Saturday, one of the first things that I noticed is the UND’s new offense isn’t as predictable and it’s more exciting. The Hawks called a couple of flea-flicker reverses.

First star — the offensive line. During Saturday’s game, neither quarterback was sacked and they protected all three quarterbacks well. Obviously, next weekend is going to be different.

The UND offensive line did a good job protecting all three UND quarterbacks.

Second star — Senior quarterback Andrew Zimmerman I thought he responded well in a tough situation. The senior played well and didn’t show any rust. It looks like he’s going to be the starter at least in the short term.

UND celebrates after a touchdown in the third quarter.