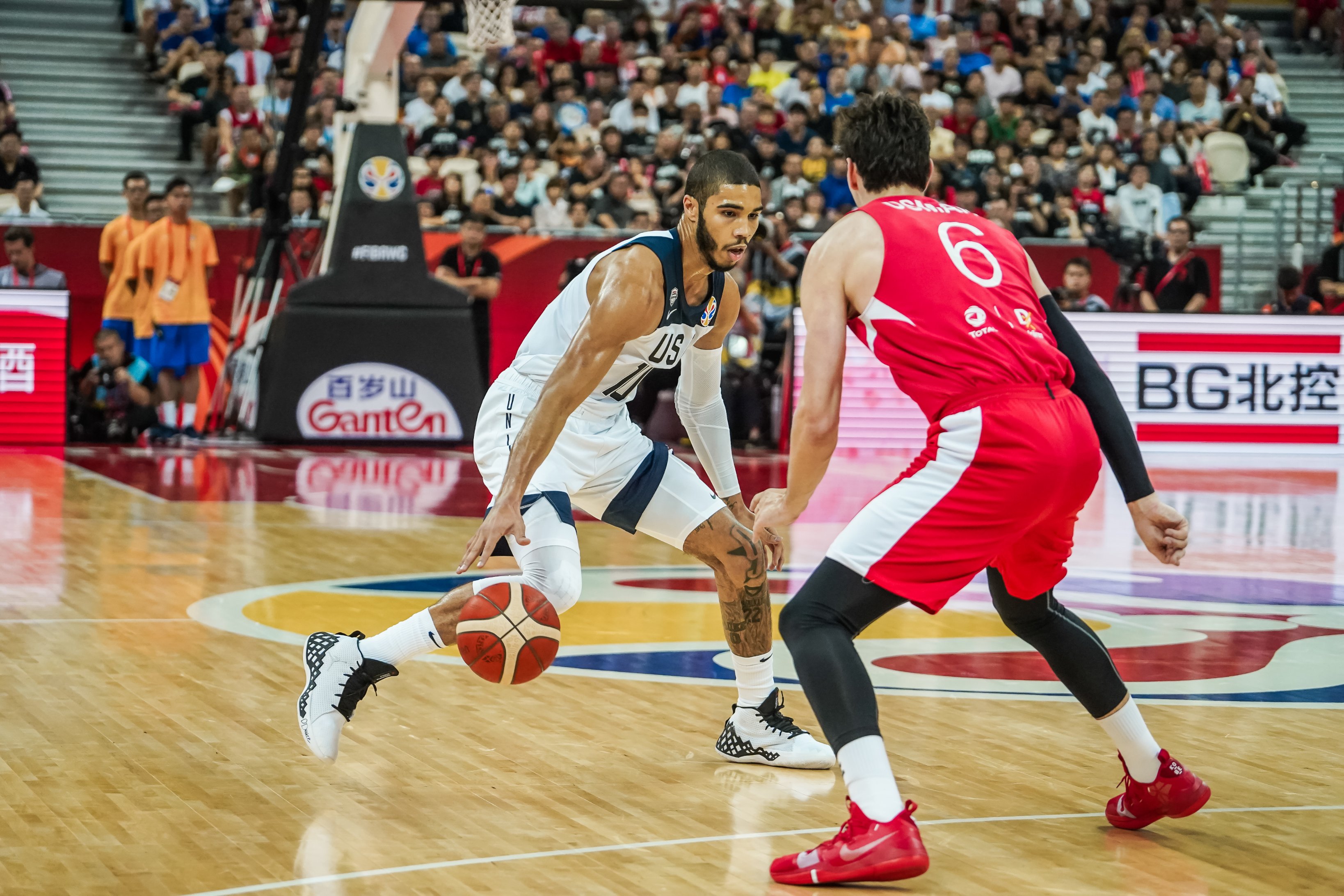 Team USA got off to a good start in this morning’s game, with Jayson Tatum and Kemba Walker leading the way for Team Shamrock. After three minutes, Team USA had a 10-2 lead, with Tatum contributing 2 points an assist and a block, while Kemba had a three pointer and a steal to his credit.

Then Turkey began slowly chipping away at the lead, and by the one minute mark Team USA was clinging to a one point lead, 20-19. The US scored six of the next eight points, to finish the quarter with a five point advantage.

Team USA started the second quarter on a roll too, with Tatum and Walker again making key contributions. Kemba notched a pair of assists, while Tatum was active on both ends of the court, accounting for two defensive rebounds and a steal, as well as an old-fashioned three point play and an assist.

When Sertac Sanli was called for a foul and Derrick White made both of his free throws, Team USA had a fifteen point lead and looked like they were pulling away from Turkey, but Turkey went on a 12-0 run over the next three minutes, before a Harrison Barnes three and a Kemba Walker layup restored a bit of order to Team USA, which went into the half with a five-point lead that should’ve been higher.

The third quarter was a rock fight, with sloppy play dominating the opening minutes. Team USA settled for three-point shots and missed most of them, while Turkey again chipped away at the lead. With two minutes to go in the quarter, a Furkan Korkmaz three-pointer tied the game 59 all, and things got chippy. After Scott Wilbekin was called for a foul on a Joe Harris basket, the two got into it and were called for offsetting technicals.

Team Shamrock did their best to keep Turkey at bay over the final minute of the quarter. Tatum blocked an Ersan Ilyasova three that would’ve given Turkey a two-point lead and Kemba Walker landed a three at the buzzer, giving Team USA a slim four-point advantage heading into the fourth.

.@KembaWalker at the buzzer! pic.twitter.com/VWNk7u0jxm

Once again, Turkey steadily worked away at Team USA’s lead as the fourth quarter opened, tying the game again at 71 all with about five and a half minutes left, but Turkey’s players were starting to accumulate fouls. Ilyasova, Semih Erden, and Scott Wilbekin all had four fouls—with five being the maximum allowed in international play.

The teams traded baskets over the next five minutes, but Turkey never quite got over the hump, until all-around pest Ersan Ilyasova tipped in a Cedi Osman miss to give Turkey a two-point advantage with twelve seconds to play.

Kemba Walker snagged an offensive rebound off a Khris Middleton miss and then Jayson Tatum drew Cedi Osman’s fourth foul on a three-point attempt. Tatum had a chance to win the game at the line, but missed his second free throw, sending the game into overtime.

0.1 left on the clock. pic.twitter.com/Br94dfqKtj

Turkey started overtime aggressively, with four players on the court that each had four fouls. It paid off in the early going, as they opened up a five-point lead after a minute and a half. On the next possession after a Melih Mahmutoglu three staked Turkey their five point advantage, Walker made a three point shot and on his second trip down the court drew a foul on Semih Erden, disqualifying him. After play resumed, Walker made a two pointer, then Tatum stole the ball from Ilyasova and went coast to coast erasing Turkey’s five point lead with a quick 7-0 run by Team Shamrock.

Myles Turner, who had been the team’s best player in the first half, turned the ball over with nine seconds left, putting Team USA in real danger of losing their first game of tournament basketball in over a decade. Dogus Balbay, was quickly fouled and missed both free throws. Turkey recovered the rebound on the second Balbay miss and Smart had to quickly foul Cedi Osman to get Team USA another chance. Osman also missed both free throws and Tatum grabbed the rebound on the live ball.

Bughran Tuncer fouled Khris Middleton at the other end of the court with two seconds on the clock. Middleton made both free throws, giving Team USA a one-point lead. Ersan Ilyasova, who had given Turkey their first lead had a chance to win the game, but his three-pointer was off the mark, giving the US a 93-92 victory.

This was about as stout a test as Team USA will face before the medal rounds of the tournament. The Turkish national team features three NBA players in Ilyasova, Furkan Korkmaz and Osman, as well as Semih Erden, who’s had NBA experience.

Arguably, Team USA should have pulled away from Turkey, but, even in the group round, a win’s a win, and it’s on to the next game.

Overall, it was a good game for Jayson Tatum and Kemba Walker, who finished +4 and +9 respectively, in a game that the US won by only a single point. Tatum struggled from the field, making only three of eleven shots, but he made up for it with 11 rebounds, two steals and two blocks. Walker notched 14 points, seven assists and three steals without a turnover.

Smart and Brown struggled, though. The two combined for less than eighteen minutes of play and six points coming off just one field goal and three free throws.