Your Morning Dump... Where it's about time we check in on The Time lord 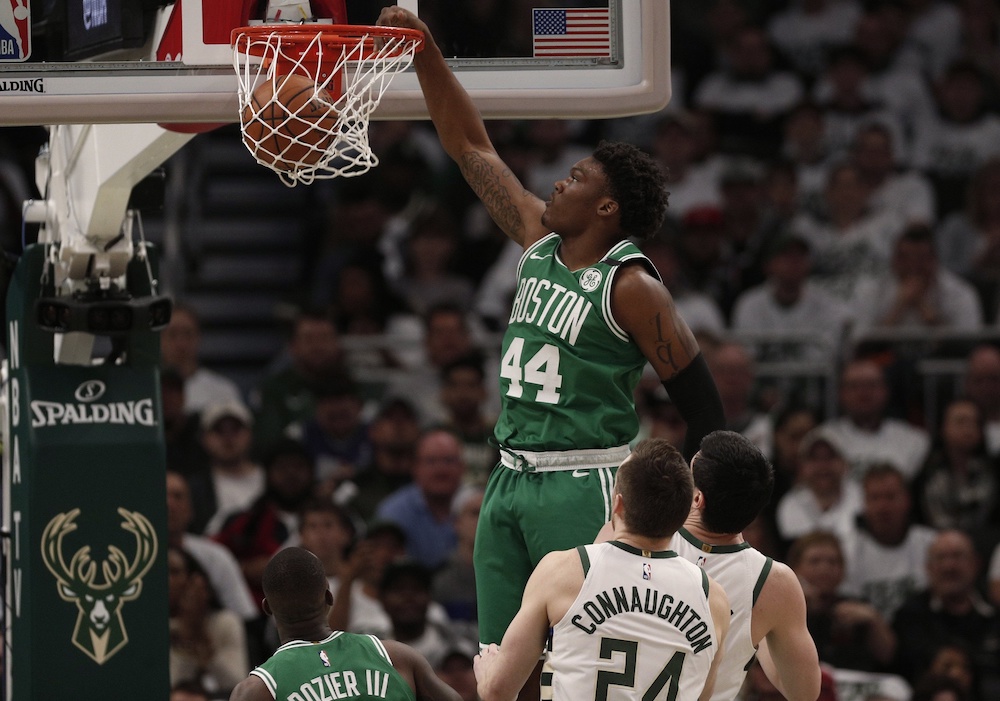 Your Morning Dump... Where it's about time we check in on The Time lord

“I think Rob Williams has put in as good of a summer as anybody,” Stevens said Tuesday night at an ABCD Hoop Dreams event at the Auerbach Center. “Just seeing him up close has been fun. He’s been here a lot and really has worked hard.”

So what kind of changes has Stevens seen in Williams when it comes to year two? The coach told BostonSportsJournal.com that his comfort level is in a far different place now than last summer, which is notable on both ends of the floor.

“Robert can pass,” Stevens told BSJ. “He’s getting more used to what we are trying to do. You can tell he’s a lot more comfortable, which is good. He feels great. His knees are great. He’s doing great.”

Stevens also spoke about his improved command on the defensive end on Tuesday night.

“His presence,” Stevens explained. “(Celtics assistant coach) Kara Lawson said something to me in Vegas that really stuck with me. She said, ‘I wish everybody communicated like Rob does.’ Last year this time, you wouldn’t have said that. Last year in the middle of the year, you wouldn’t have said that. “That may be the great leadership back to (Aron) Baynes and Al (Horford), being passed down to a young player playing the same position.”

Ahhh, I love the smell of potential in the morning! Isn’t it fun to imagine that Robert Williams, our very own Boo Butt, the Lord of Time, quickly morphs into Clint Capela this season, becomes our starting center by November, and is a chief reason why the Celtics are battling the 76ers or Bucks in the Eastern Conference finals, where the Giannis’s and Embiid’s of the world demonstrate caution whenever they enter the paint?

Back to reality. Perhaps what we should really hope for is that Williams earns the trust of the coaching staff by around November, so that he’s the first big off the bench regardless of the situation. On offense, he becomes the fulcrum of the Celtics’ sets, doing his best Al Horford impression as an improved passer above the free throw line, and then extends his range ever so slightly to about 10-12 feet, while flushing everything in sight when around the rim. On defense, he stays connected to the rest of the Celtics’ scheme while still providing the ability to alter shot attempts without fouling.

Even all of that is likely too much to ask for, but small improvements will go a long way and will be expected this season with more opportunities and responsibility for Williams.

The most encouraging aspect relayed on by Brad is that Williams seems committed — both to the work and to growing some of the leadership skills that will make him successful in the league. An apparent lack of that is what caused him to drop into the Celtics’ lap a year ago. Now let’s see how things go when he’s called upon to do more, and when he’s still likely to experience some major growing pains this season.

There’s a ton of intrigue around this team and we’re spending much of our time thinking about the guys currently in China, but the Time Lord’s development is certainly going to be a top storyline to watch.

On page 2, many of the Cs realize summer is the best time to be in Boston

“In the past we’ve had a lot of guys all over the country,” Brad Stevens said during a charity appearance at Children’s Hospital. “This year it seems like more people have made Boston a central location for where they want to be, and I think Gordon had a lot to do with that.”

Hayward has been enjoying his first healthy offseason in two years. After a rough season following his broken ankle, Hayward is hoping this helps propel him to a return to form.

“It was just important for me to stay here and work with the staff,” Hayward recently said. “They kind of knew exactly where I was at after the season and I wanted to build off of that and also work with the coaches and get ready for the upcoming year.”

Hayward’s personal plan became an example for others.

“He sat down with our strength and our coaches and said ‘this is what I want to do this summer. I’m going to stay here,’” Stevens said. “I think when some of your older guys do that, it sets a good standard for everybody.”

Boston, Milwaukee (yes, Milwaukee), Chicago, Philly… Get me in a northeast or midwestern city that’s by the water in the summertime and that’s the time I want to be there the most.

No, Gordon Hayward, Robert Williams, and others aren’t staying in Boston for the weather, activities, and atmosphere, but it’s certainly encouraging to know they’ve been putting in the work close by.

Even more notable that, after last season’s disaster, the first instinct of these guys was probably to get as far away as possible, or even to leave the team (see Irving, Kyrie and Horford, Al). I’m getting the sense that whereas last season’s Celtics came in believing the work had already been done, this season’s group is incredibly eager to put last year out of sight and mind, and the best way to do that is to win early and win often.

We’ll do our season predictions in the next month, but I’m starting to think a 50+ win season is a possibility.