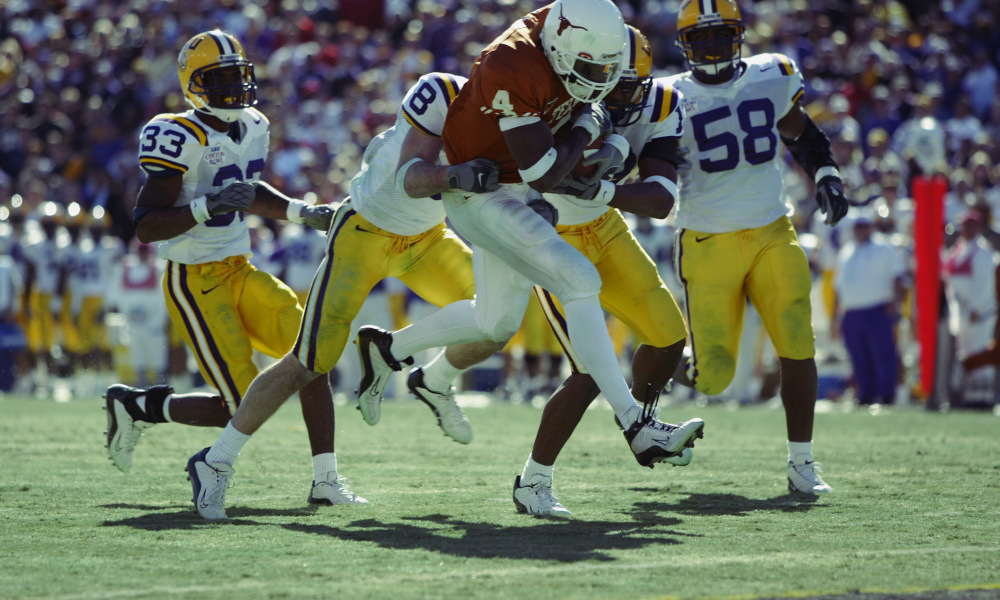 For the first time since the Cotton Bowl to wrap up the 2002 season, LSU and Texas will meet on Saturday in Austin in a top-10 match-up.

Both teams opened the year with easy victories. The Longhorns defeated Louisiana Tech, 45-14. LSU had no problem with Georgia Southern in a 55-3 rout.

The meeting will be the 18th all-time between the schools, but the first during the regular season in 65 years.

Who: No. 6 LSU (1-0) at No. 9 Texas (1-0)
When: Saturday, Sept. 7 at 7:30 p.m. ET
Where: Royal Texas Memorial Stadium in Austin, Texas
Network: ABC
What’s at Stake for LSU: LSU looks to make a statement win on the road in Austin and perhaps catapult itself into the top 5.
What’s at Stake for Texas: A victory for Texas would likely lead to a rise in the polls and send a statement that Tom Herman’s team is a legitimate national championship contender.

(9) Texas 35, LSU 20
Jan. 1, 2003 (Cotton Bowl)
Texas wrapped up an 11-win season in 2002 with a 15-point victory over LSU in the Cotton Bowl. LSU actually led 17-7 in the second quarter, but Texas responded with the next 28 points. Chris Sims passed for 269 yards and two touchdowns while wide receiver Roy Williams finished with 142 yards receiving and a score on four catches. Williams also rushed for a 39-yard touchdown. Linebacker Lee Jackson returned a fumble for a touchdown in the victory.

(11) Texas 7, LSU 20
Sept. 19, 1953
LSU opened the 1953 season with an upset of Texas in Baton Rouge. Texas was held to 154 yards and turned the ball over six times. Jerry Marchand and George Brancato each rushed for touchdowns for the Tigers in the upset. Dougal Cameron broke up the shutout with a 4-yard touchdown run in the final quarter for the Longhorns.

(11) Texas 35, LSU 14
Sept. 20, 1952
Texas opened the 1952 season in Baton Rouge and got the better of the LSU Tigers. The Longhorns blew a 7-7 contest wide over the final 6:10 of the second quarter. James T. Jones rushed for a pair of touchdowns over that stretch, sandwiched around a Glen Price fumble return for a touchdown. Jack Barton’s late 22-yard interception return for a touchdown put the exclamation point on the victory.