Your Morning Dump... Where the Hall of Fame induction is once again tinted green 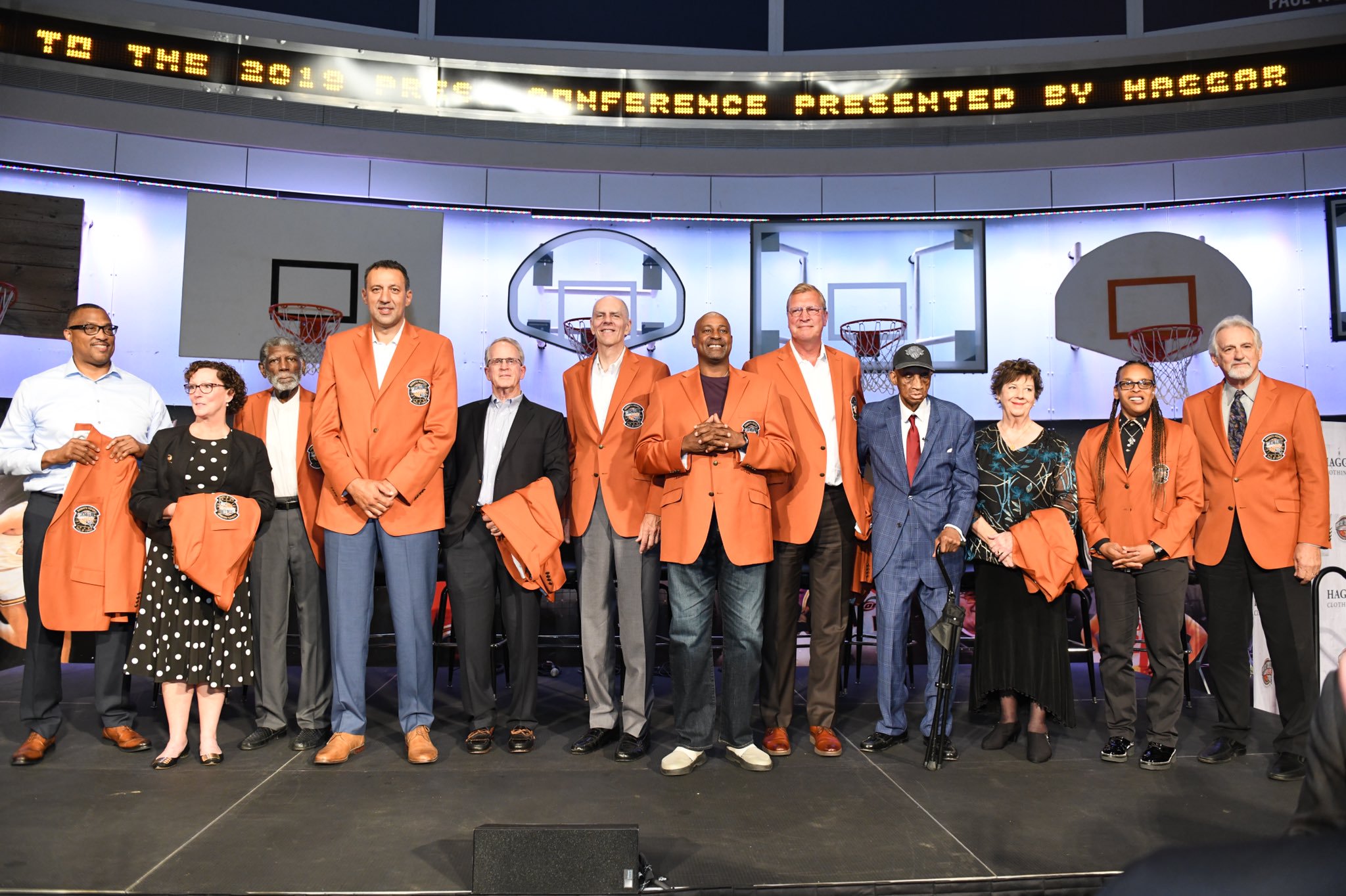 Your Morning Dump... Where the Hall of Fame induction is once again tinted green

The Basketball Hall of Fame in Springfield had its induction ceremonies tonight, and a total of 12 individuals and teams will be inducted:

Of those 12, four played for or coached the Boston Celtics, and three of them won championships with the team.

I suppose you could stretch a point and say that the HOF class was really green-tinged, as Moncrief and Sikma both played for the Bucks and Sikma also played for the Sonics, but you’re not hear to read about those guys.

Bill Fitch coached the Celtics to a championship in 1981, and coached the team to three consecutive 60 win seasons (’80, ’81 and ’82), becoming only the second NBA coach to accomplish the feat. He still holds the Celtics’ record for overall winning percentage (.738). I’ve already said a bit about Fitch–the way the team quit on him in ’83, and Larry Bird’s regard for him.

Chuck Cooper was the first African-American player drafted in the NBA, in 1950. He was picked by Walter Brown, who likewise drafted the first African-American player in the NHL (Brown owned both the Celtics and Bruins). When a fellow owner told Walter Brown that Cooper was black at the NBA draft in 1950, Brown replied, “I don’t give a damn if he’s striped or plaid or polka dot, Boston takes Charles Cooper of Duquesne!”

Carl Braun played most of his career with the New York Knicks, spending only his final season with Boston in 1962. That final season was interesting, because he had been the Knicks’ player/coach for the previous two years. Braun averaged only about nine minutes a game that season, and, along with Al Butler, were the back-of-the-bench guys who spelled Bob Cousy and KC Jones.

Paul Westphal was drafted by the Celtics in 1972 and played with the team until 1975, winning a championship with the team in 1974. As one of only two surviving members of the HOF class with Celtics connections, and the only one able to attend tonight’s induction, Paul had an opportunity to speak to the media (read: John Karalis) beforehand, and said a few things about the current state of the NBA:

To Westphal’s point, the full-scale embrace of the 3-pointer may have created a similar effect. The artistry of creating an offense has succumbed to the cold perfection of analytics. The formula is the same for everyone, it’s just a matter of who can execute it better.

“You don’t need a diverse offense, all you need is a high screen and roll and shooters everywhere,” Westphal said “I’d like to see more subtlety and make it harder to get a shot.”

To Westphal’s point, the full-scale embrace of the 3-pointer may have created a similar effect. The artistry of creating an offense has succumbed to the cold perfection of analytics. The formula is the same for everyone, it’s just a matter of who can execute it better.

“You don’t need a diverse offense, all you need is a high screen and roll and shooters everywhere,” Westphal said “I’d like to see more subtlety and make it harder to get a shot.”

Paul’s got a point—and one that seems to be universal to competitive human endeavors: Once someone figures out the most efficient formula, everybody copies it.

You see the same thing with movies: Go back to the 1950s through the 1970s and there was a ton of experimentation. Whether it was the unconventional narrative structure of Italian neo-Realists like Antonioni and Fellini, or the dreamscapes of Ingmar Bergman, or, back in Hollywood, the broad range of genre films, from crime to westerns to romance to all kinds of comedy. You had films like To Catch a Thief, that didn’t really fit into any category.

In the 1970s, studios felt that the easiest way to make a buck was to give an ‘auteur’ a big pile of money and complete control over the movie, but from the 1980s on into the 1990s, based on the success of Lucas and Spielberg, you had this switch to movie ‘franchises’, which has turned into a focus on blockbuster movies that cost almost half a billion dollars to produce, and which need to gross nearly a billion to turn a profit.

They don’t make small movies anymore—there’s not enough money in them.

The result? There is a certain sameness to theater fare these days.

The same thing happened years ago in football, and its happening right under our eyes in basketball: The rules of the game give an advantage to a certain style of play, and that style of play dominates the league.

But, to be fair, Westphal played during an era of transition. Basketball was just as formulaic in the 1950s and early 1960s: Throw the ball into the big, and he takes a shot from about five to ten feet away from the hoop, and makes it about half the time. The success of the Celtics and, to a much lesser extent, Lakers at breaking that mold led to the era of experimentation that Westphal experienced.