Edwin Diaz Remains Talented, But Can He Perform? 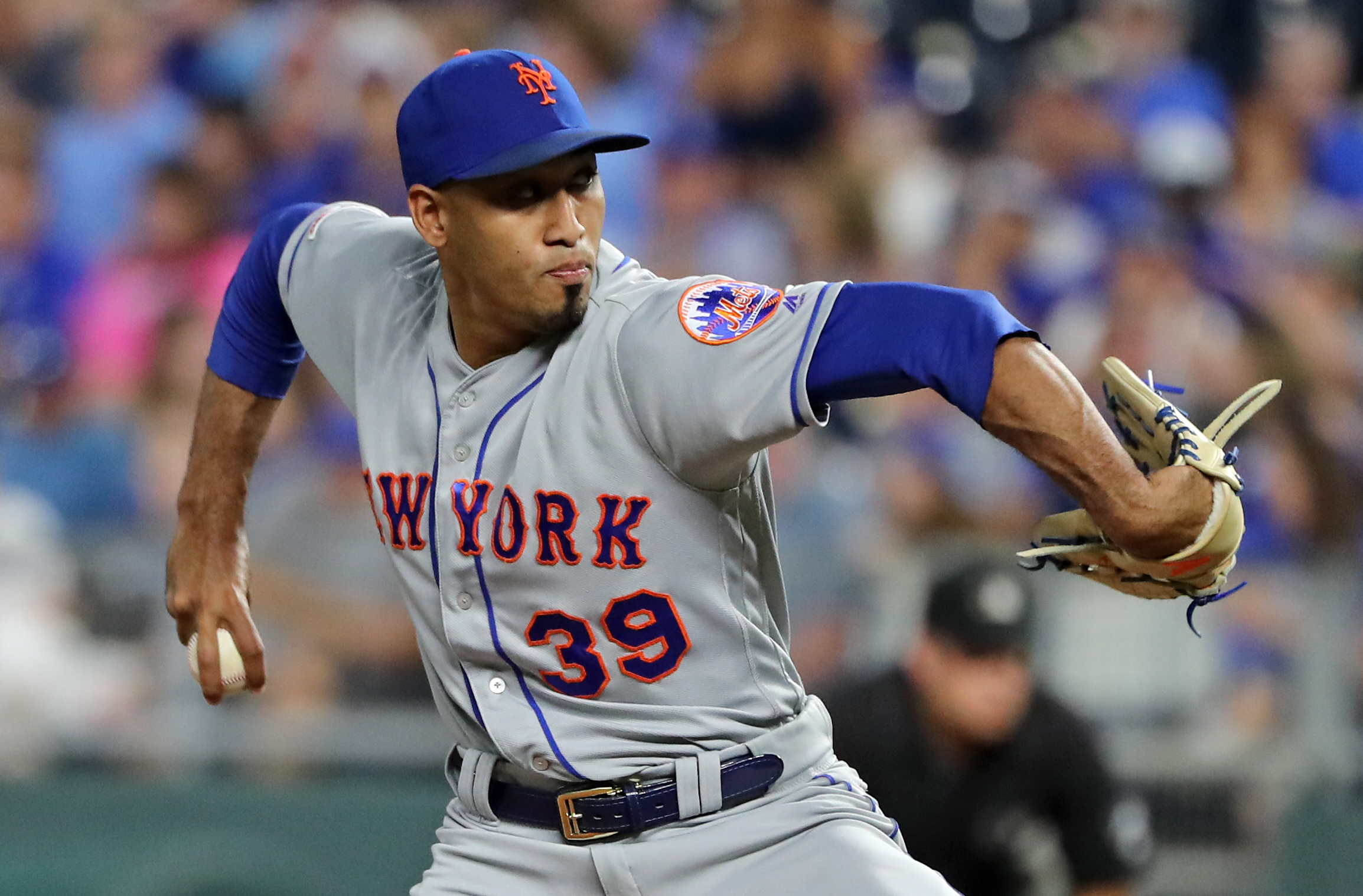 Edwin Diaz Remains Talented, But Can He Perform?

In early December of this past offseason, the Mets swung a blockbuster with the rebuilding Mariners. Robinson Cano and Edwin Diaz were coming to the Big Apple, and 5 players, headlined by prospect Jarred Kelenic, were headed to Seattle. As interesting as it was at the time, this deal has still been the center of attention all the way up to September.

Kelenic has been a big riser up prospect boards and is now the prized prospect of Seattle’s farm system, and Jay Bruce and Anthony Swarzak both also put together solid seasons since leaving the Mets. On the other side, Robinson Cano has been an alright hitter, but has dealt with injuries and consistently struggles to look athletic enough to be on the field.

Edwin Diaz, the 25-year-old All-Star closer, was arguably the most valuable player in this trade when it was made. Fast forward to today, and a lot of opinions have changed. His first 3 MLB seasons made him look like the next great reliever, the next Craig Kimbrel or Kenley Jansen. Instead, he currently has a 5.88 ERA through nearly 60 games, 2.4 HR/9, and a -0.7 bWAR in his first season with the Mets. He had been knocked out of the “Closer” role by Mickey Callaway, and after being put back into the position nothing has gotten better. Only 3 other relievers (Rodney, Familia, Stanek) have a worse WPA than his at -2.17.

Coming into the season, with as many questions that the team had, they at least felt like they had the 9th inning down for several years. Diaz would once again be the shutdown closer he was for a few years with the Mariners, and he would continue to repeat his sub-2 ERA seasons. Instead, their greatest weakness is likely that 9th inning. The 31 homers allowed by the Mets in the 9th inning are a new MLB record with a few weeks left to go.

Obviously, many Mets fans are angry about this. How could one of the best, if not the best, per-inning pitcher in baseball all of a sudden turn into an unplayable pitcher at the age of 25 in his first season with the team? To many, this is another bullet point on a long list of embarrassing notes on the Mets in the past few years. Diaz’s blown save against the Phillies and J.T. Realmuto the other day and his involvement in the recent shocking loss to the Nationals caused a public outcry, even though they eventually won the game and do not have any clear alternatives. Ultimately, the Mets will still believe in him to a certain extent. Even though he was involved in trade rumors this deadline, they chose to keep him and a troublesome August shouldn’t push them over the edge.

Of course, Diaz is a reliever, so this might all be an overreaction. He has played the full 2019 season, but still, his innings pitched number is low enough for anybody to have overperformed or underperformed their true talent level. That can be true for both his 2018 season, which ended with a top-10 finish in AL Cy Young voting, and his 2019 season, which has led to jeers from the home crowd.

When digging into the numbers a little bit, it seems like some regression should have been expected from last year for sure. While his SIERA, FIP, xFIP, and DRA were actually better than his ERA, ZiPS came into the season projecting him to have a 2.36 ERA. Of course, even if that was what the Mets were expecting coming into the 2019 season, they are still greatly disappointed. However, instead of saying he was not as great as he was with Seattle, it is probably more true to say he is not actually as bad as he has performed in his first year in New York.

Based on quite a few metrics that are typically more reliable for relievers than ERA, Diaz looks poised to eventually bounce back strongly. His velocity is as good as ever, continuing to touch 100 mph on his fastball, his movement on both his fastball and slider match well with previous seasons, and the underlying results have been well above average. Through this point in the season, Diaz has a 3.09 xFIP, 3.05 DRA, a .286 xwOBA, and a 2.67 SIERA. His nearly 40% strikeout rate is very close to his 2018 mark and makes him top 6 among MLB relievers.

Diaz’s surprising fall has come as a result of a league-leading .394 BABIP and a 2nd highest ranked 28.0% HR/FB rate. Typically, it is safe to assume those numbers end up regressing to the mean, and it will result in Diaz bouncing back to a key role for the Mets again. There are only 5 other seasons since 2000 with a similarly high BABIP and HR/FB, and only 2 of those seasons were followed by another full season. Both of those 2 pitchers, Brian Matusz and Shawn Camp, had significant bounce-back seasons after seeing a lot of bad luck with balls in play.

While in most cases BABIP and HR/FB are a result of luck, it is still worth looking into further to see if Diaz has declined in any area that would cause such a significant spike, especially considering these have been problems throughout the season. One interesting note is that while Diaz’s xBA is lower than his actual BA allowed, it is still at .214, higher than in 2017 and 2018. His line drives allowed rate is not any higher this year, and he has actually produced more fly balls, which should tell you that if anything it would be declining.

What seems to be the biggest difference year-to-year, however, is that while less than 30% of grounders allowed by Diaz is previous seasons were hits, in 2019 45% of them have been hits. There has not been an increase in balls hit the other way, which would typically cause an increase. If there is anything significant, it is that Diaz is seeing about an 18% increase in the hard-hit rate for grounders. While typically that number sways higher and lower just from the small sample size, maybe in the end that is the problem with this 2019 season for the right-hander.

In terms of flies making it over the wall, the problem has essentially been the same. Moving home stadiums is not the problem, especially now that he is in Citi Field, but an increase in hard-hit rate. His Barrel% has gone from a much better-than-average 3.8% in 2018 to bottom 5 in the league at 11%. His exit velocity against has gone up 2 mph. Barrel% for pitchers typically has better reliability than Hard-Hit%, so this may set off a siren that Diaz’s poor results are more than a few balls bouncing the wrong way.

While his four-seamer has experienced some problems this season, the increase in exit velocity against and xwOBA has mostly hurt his slider. In 2018, his slider produced a .168 xwOBA, an 86.4 exit velocity, a 37.3% Put Away rate. In 2019, those numbers are .279, 90.6, and 22.9%, respectively. Additionally, he has begun to throw the pitch less often with 2 strikes. Is it the location of the pitch? It doesn’t seem like it. While he has hung a few more sliders this year compared to last year, the slugging percentage against the slider has increased significantly on even pitches located at the bottom of the zone. Overall, Diaz has a similar Edge% compared to last season.

So, if the hard-throwing reliever’s fastball hasn’t had many problems, and his slider’s velocity, movement, and location haven’t been problems, then why has he been much worse at controlling contact this year? It is very possible that there is nothing to find, and that Diaz is ultimately the same pitcher as always and will bounce back just fine. There is also speculation that Diaz may be tipping his pitches, which would allow opposing teams to seek out a certain pitch and do more damage. If that is the case, on the one hand, it is disappointing to know there is more than bad luck, but on the other, it is also promising that there is not a major fix needed to make Diaz an elite pitcher again.

Ultimately, it seems as if the reaction to Diaz’s struggles is a bit of an overreaction. There will be some regression to the mean, and maybe he settles in as a reliable closer or even the All-Star-like pitcher he showed flashes of in Seattle.