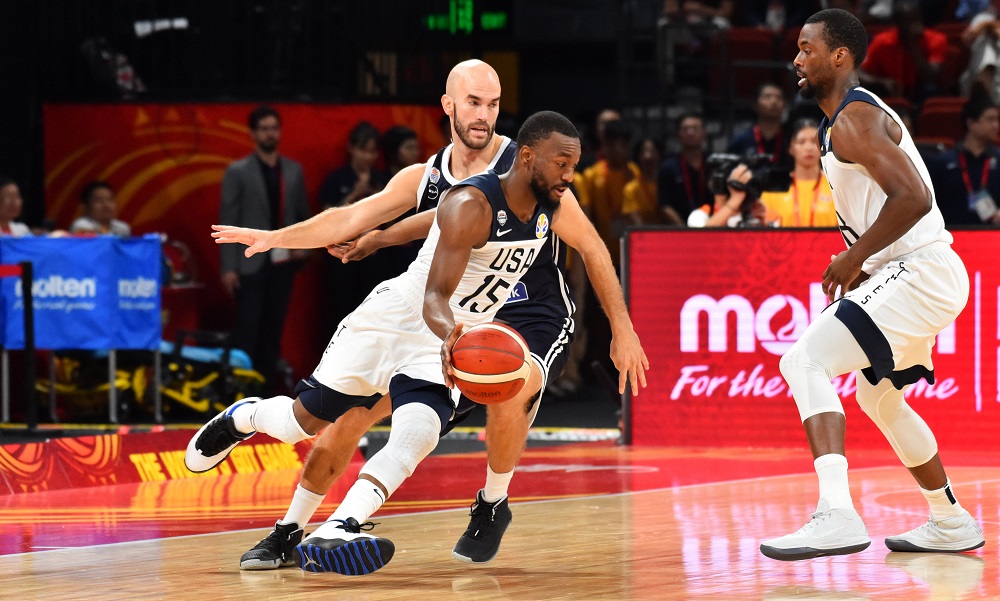 The Americans started the second quarter trying to regroup from a missed opportunity to build a lead with Giannis off the floor. Instead, because of Smart, they built one with him on it.

The thing that makes Smart effective against Antetokounmpo is that his hands are quick enough to disrupt Giannis’ drives while being strong enough to keep his position on the post. When Giannis tried to post up, Smart spun and fronted him, forcing the Greeks to consider a dangerous, high pass into traffic.

Antetokounmpo didn’t score in that second quarter run, and the U.S. built what was ultimately an insurmountable lead.

Jaylen Brown also played some pretty good defense, which is encouraging for Boston

It’s hard to translate FIBA performance to the NBA, even with NBA players, but there have been some encouraging aspects to Brown’s defensive game. Most notably is how he’s been able to stand his ground against bigger guys.

Good, strong, encouraging 16-point win for Team USA today – perhaps their best so far – and all three available Celtics (Tatum sat out with his ankle sprain) played an important role. The Americans are now 1-0 in the second round of the FIBA World Cup and 4-0 overall.

Antetokounmpo scored 7 points in the first 5 minutes to put Greece ahead early, but when he went to the bench, the USA made a run to open up a 6-point lead. Unfortunately, the Americans fell asleep on defense and allowed the last two hoops of the period, including a buzzer-beating layup on a court-length outlet pass.

Team USA bounced back in the second quarter behind a strong defensive effort, winning the period, 19-8. Marcus Smart guarded Giannis for stretches and took the NBA’s MVP out of the Greek offense. Giannis made just one bucket in the second because of effort like this:

Just watch Marcus Smart work on Giannis and then fly into a closeout. Great stuff. pic.twitter.com/4Vqe6NlP5h

Greece opened the third with a 5-point run, but a Kemba triple helped the USA bounce back and establish a 15-point advantage. Giannis tried to will Greece back into it with his trademark attacks on the rim, but the Americans swarmed him and his teammates couldn’t make the USA pay for their strategy. Team USA forced two shot-clock violations in the quarter and extended their lead to 17 points (54-37) going into the fourth.

Giannis subbed out and the game should’ve been over, but suddenly Greece began making shots and cut the margin to 11. Finally, a Donovan Mitchell three with 3 minutes left stabilized the score. Giannis never did come back on the floor, which was mystifying. Final: USA 69, Greece 53. Box score.

The final quarter elevated Greece’s shooting to 32%, but the USA defense overall definitely decided this game. All the Celtics got the job done, too.

Heck of a defensive performance by Team USA in today’s 69-53 win against Greece. Marcus Smart did all the dirty work. Jaylen Brown had a patient and productive game. Tatum has missed two games, which means he’s getting to the point where he could come back soon, if not next game.

There was also some postgame drama between the squads because Harrison Barnes took a shot to the head from Giannis’ brother on a breakaway dunk in the final minute. Jaylen especially didn’t like it.

Members of Team USA & Greece had to be separated after the game. USA players, especially Jaylen Brown, furious about late foul by Kostas Antetokounmpo on Harrison Barnes. Teams didn’t shake hands. Team USA staying on floor as Greeks are in tunnel

“It’s good to go through some adversity,” Ainge said. “But last year was a little much.”

With a new season right around the corner, there’s a renewed optimism that extends beyond Brad Stevens’ happiness.

“And not just Brad, all the coaches,” Ainge said. “I want them to have fun and enjoy the job. The whole organization, our fans, enjoy the product on the court; our owners who invest millions, hundreds of millions of dollars into our team. I want all those people to enjoy what we have going.”

Oh my, can Celtics fans relate. We suffered for 91 games last year. Over and over we were fooled into thinking the team was finally figuring things out. Instead, the pain just kept increasing.

As a result, the fans’ common refrain heading into training camp is, “I don’t mind if the Cs aren’t contenders this year, I just want to enjoy watching them again.”

Danny, we’re all counting on you.

And, finally…Hiring the best person for the job

Feaster is the second woman added to the Celtics’ staff this summer, after Kara Lawson was made an assistant coach following the departure of Micah Shrewsberry.

Feaster spent 10 years in the WNBA, and played internationally in France, Italy, Portugal and Spain. She averaged eight points, 2.4 rebounds and 1.4 assists in the WNBA and played for three different teams. A 5-foot-11 forward, Feaster spent her collegiate career at Harvard where she amassed the second-highest point total in Ivy League history.

After her playing career ended, Feaster became part of the inaugural NBA Basketball Operations Associate Program, which the league set up to help former NBA and WNBA players transition to front-office positions. After finishing the program, Feaster was hired to be the G-League’s player personnel and coach relations lead.

It’s a new era in the NBA: the best person for any particular job gets hired, and it mostly doesn’t matter whether that person is male or female. Boston has gotten fully on board in a hurry this offseason, now with two women joining the team.

This development is happening only in the NBA – definitely not in any other major sport in the US – and this article from the summer gave an accounting.

In 2014, Becky Hammon became the NBA’s first full-time female coach and the first in any of the four major U.S. professional leagues. There should be a record eight women in on-court coaching roles this upcoming NBA season, with 18 more holding basketball operations positions in front offices. Six women hold controlling or significant ownership stakes in teams.

“The league, they don’t just choose anyone. They choose the right people. It’s a competitive league, and there’s a lot of men in this league. I know the people who are being hired right now, they’ve been ready for this position. They’re prepared,” said Natalie Nakase, a Los Angeles Clippers player development coach. “It’s been really good to see women getting these positions and hitting a home run with it.”

So now Feaster becomes the 19th female among front office personnel. Fans and media seem to be accepting of this shift; I haven’t seen much backlash about it, except last year when Hammon got some criticism about interviewing for Milwaukee’s head coach position. But that was the exception. Most of us understand that Hammon was hired by Gregg Popovich, and he wouldn’t have anyone working for him who wasn’t exceptional.

In hiring women, Danny Ainge is really just following the same philosophy as Red Auerbach and Walter Brown did in the ’50s when they broke barriers such as drafting the NBA’s first black player (new Hall of Famer Chuck Cooper) and deploying an all-black starting five. Whoever gave the Celtics the best chance to win, that’s who they wanted.

Globe: Basketball Hall induction was a night for the unheralded