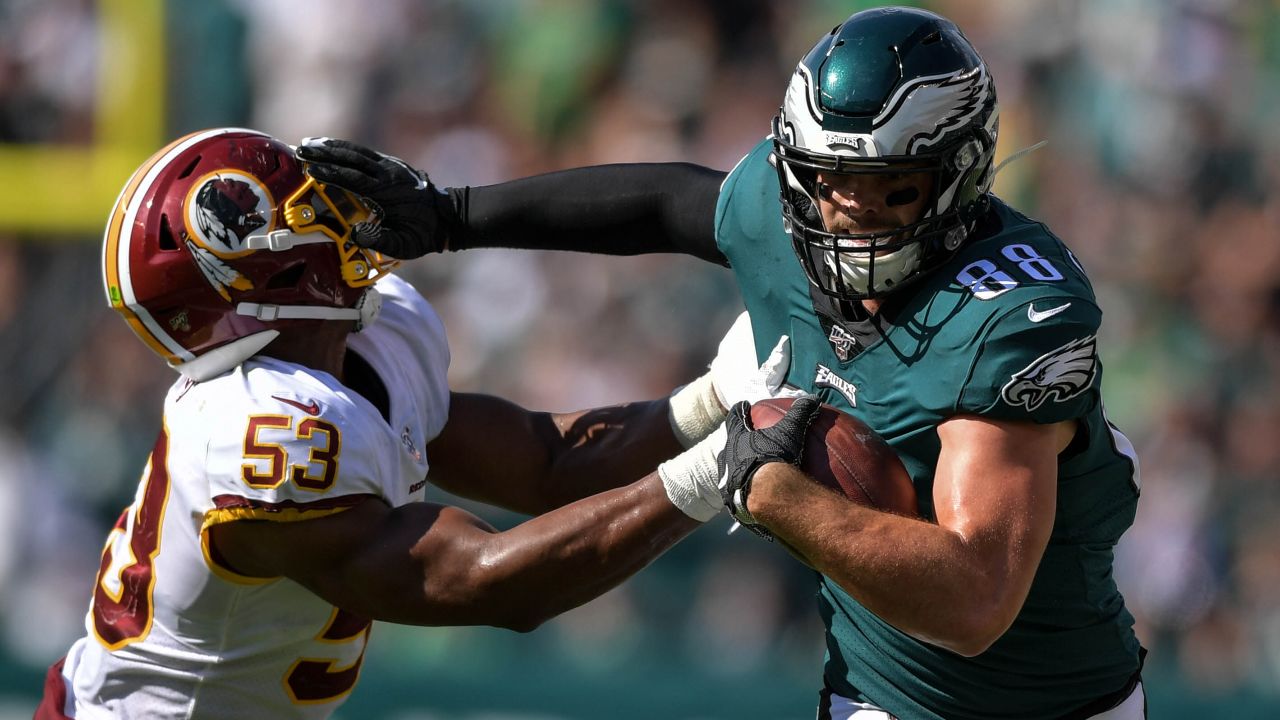 You take the W, but another slow start like that may not end as well.

EYE will not complain about a W. In fact, there were many blessings to count. Purely from a fan’s viewpoint, the game was well-officiated, with only very obvious penalties called and absolutely zero challenges. That in itself made the game more fun, even when we were behind, because I noticed two omens as a result of the accelerated pace of play:

1) The ‘Skins as a group were celebrating way too early, and
2) Washington’s starters on defense were visibly tiring as the game went on.

As predicted here, old Vernon Davis the Eagles-killer made his usual mark on the proceedings, and Case Keenum found a way to exploit the Eagles’ soft corner alignments.

But basically it was just a matter of time before Washington’s depleted roster ran out of answers for Doug Pederson’s slow-cook playcalling. Things boiled over in time for a comeback win which temporarily masks some early defects in the Eagles’ pass rush and pass coverages, which of course are inextricably linked. Also EYE wasn’t too thrilled with early responses to Redskins’ blitzes, which unexplainably stopped coming after the Birds took the lead.

The Associated Press will remember this one as the DeSean Jackson Show.

“Carson Wentz threw a pair of deep touchdown passes to Jackson, and the Philadelphia Eagles overcame a 17-point deficit to beat the Washington Redskins 32-27 on Sunday.”

That’s all history will record in the journals. No greater hidden meanings need be implied or inferred.

Wentz was 28 of 39 for 313 yards and three TDs in his first game since Week 14 of last year after not taking a snap in the preseason. Jackson had eight catches for 154 yards. The Eagles racked up 436 total yards.

“I couldn’t stay calm,” Jackson said. “I was overly excited like a kid before Christmas, knowing what I mean to the city and what the city means to me. I couldn’t think of it being any other way.”

Case Keenum threw for 380 yards and three TDs, helping the Redskins build a 17-0 lead in his first start with his fourth team in four seasons.

But Philadelphia’s high-powered offense took over and the defense settled down after a sloppy start. Playing his first game back in Philadelphia since former Eagles coach Chip Kelly cut him following his third Pro Bowl season in 2013, Jackson picked up where he left off six years ago and showed no signs of slowing down at age 32.

EYE think DJax still runs a solid 4.40. It’s obvious he’s been working hard behind the scenes despite his movie-star lifestyle, which is probably more a cultivated illusion than reality.

“We were able to get him in some mismatches and hit those two home runs,” Wentz said of Jackson. “With him being out there and the other weapons we have, we’re going to keep teams on their toes.”

Jackson blew past the defense on a third-and-10 in the third quarter, caught Wentz’s pass inside the 10 and strolled into the end zone to give the Eagles a 21-20 lead. The 53-yard TD reception was Jackson’s second of 50-plus yards in the game and the 31st of his career. Only Hall of Famer Jerry Rice had more at 36.

“One of those was miscommunication and the other was a great throw, but DeSean is DeSean,” said Redskins coach Jay Gruden, who had Jackson in Washington from 2014-16. “You can never blow a coverage when No. 10 is on the field.”

The Redskins had gotten the ball to start and scored a touchdown on the season’s opening drive for the first time since 2004. Vernon Davis turned a short pass from Keenum into a 48-yard score after hurdling Ronald Darby and breaking a tackle on his way down the right sideline.

Keenum then hit Terry McLaurin perfectly in stride on a deep pass for a 70-yard TD to give the Redskins a 17-0 lead, inciting the first boos from Philly fans anticipating a championship season.

The Eagles trailed 17-0 in the second quarter when Jackson made an over-the-shoulder, 51-yard TD catch.

Wentz found Jeffery going across the back of the end zone for a 5-yard TD pass to cut Washington’s lead to 20-14 in the third quarter.

Zach Ertz caught a 26-yard pass to set up Alshon Jeffery‘s first career rushing score on the first play of the fourth quarter. Jeffery caught a backward pass from Wentz and fought his way into the end zone. Darren Sproles ran in for the 2-point conversion to extend the lead to 29-20.

At that point the Birds looked fresh, the ‘Skins appeared gassed. A late FG by Jake Elliott appeared to seal the deal, but the old “Schwartz Sticks Defense” gave up a time-consuming TD drive by Keenum. VEGAS appreciated that—the Eagles failed to cover their 10-point spread.

Eagles: LB Kamu Grugier-Hill (knee) and CB Jalen Mills (foot) were the only starters still out of the lineup. … DT Malik Jackson limped off the field late in the fourth quarter and wore a walking boot after the game. As of this writing, it looks like a season-ending deal. NEXT!!

Although the Eagles secondary had some sloppy moments, the game was actually held in check by the front seven, who stopped the Redskins’ running game for almost nothing. Conversely, the Birds had a nice day running the football by committee—perhaps the ultimate reason they were able to win the game by keeping the Redskins defense on the field for a huge clock advantage.