Your Morning Dump... Where we round up the World Cup storylines. 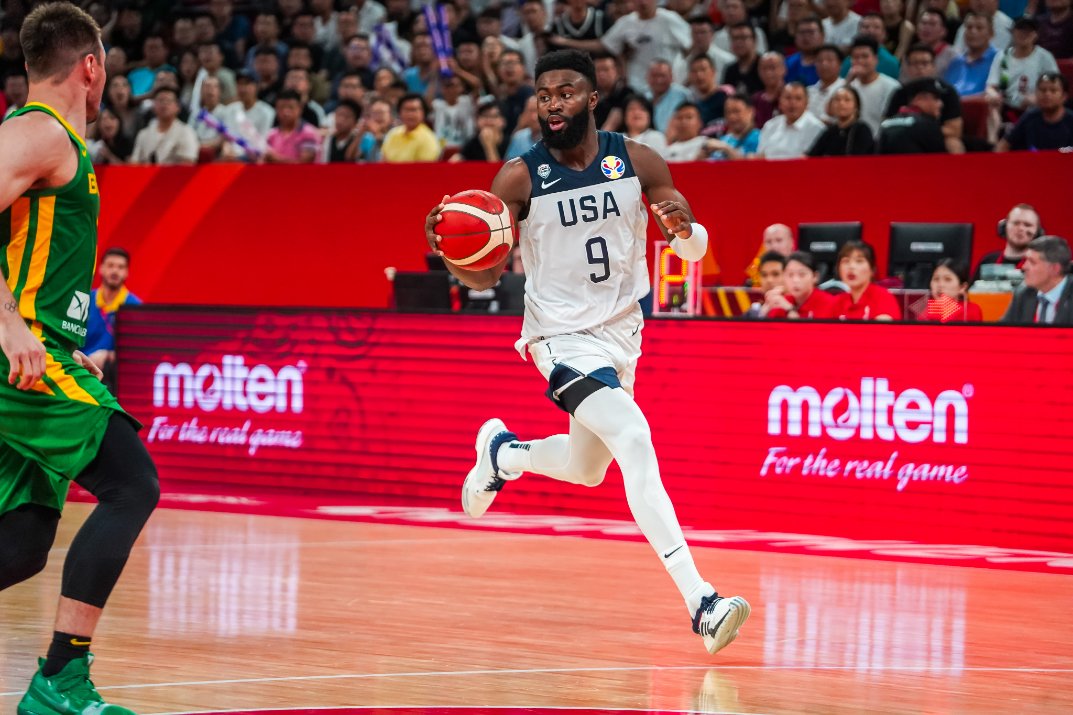 Your Morning Dump... Where we round up the World Cup storylines.

Late in the fourth quarter, Brown burst into the paint from the top of the key and, when a Brazil defender stepped up to impede the path to the rim, Brown calmly shuffled the ball to Khris Middleton on the baseline for an uncontested layup.

The sequence came just a short while after Brown had rumbled unfettered to the rim for a loud dunk. But instead of trying to force the issue on the second drive, he made the right play for easy points (all while avoiding an offensive foul).

Brown routinely made good decisions throughout Monday’s game. After a steal in the third quarter, he streaked in on a 2-on-1 before shuffling to Derrick White for a layup. When big-man help came to prevent a drive later in the frame, Brown flicked the ball to Myles Turner in the paint for a little bunny. In the fourth quarter, Brown grabbed a rebound and pushed the ball hard up the court before delivering a little jump pass to Harrison Barnes for a dunk.

Jaylen may never become a super star, but—provided he improves his free throw shooting—I could see him developing into a complete player, one with no easy to exploit weaknesses on either end of the court.

“At the end of the day, it’s basketball,” Brown said after beating Brazil. “I feel like I’m not a position player; I’m a basketball player. Four, three, two, whatever, five, I played some five today. Whatever coach needs me to do, make the adjustment.”

“He’s a strong player,” Popovich said. “For his size and strength, he moves well. He can really penetrate. He can catch and pull or get to the rim. He unselfish and will find other people. He works on defense. He’s just kind of an all-around player.”

Jaylen is a prototypical basketball player. If you had to populate an entire team with guys who were all built exactly the same, you’d go with a guy who looks a lot like Jaylen. He’s got the build and the mindset to play multiple positions, and in an increasingly position-less NBA (essentially mid-major basketball writ large), Jaylen—as John points out in the article above—may end up being asked to make some sacrifices, he may end up having to stretch himself a bit on defense in order to cover a guy who would give Gordon Hayward or Jayson Tatum problems, but he’s got the right mindset to make those adjustments, and he’s got the athletic ability to handle those assignments.

Also, random World Cup question: how in the heck to those guys pay attention to the game with those huge distracting animated advertising panels right up against the court?

Page 2: Where Tatum’s expected back soon

Good news for the Celtics and USA Basketball, per NBA Insider @ShamsCharania:

Jayson Tatum has a strong chance to make his return for Team USA in quarterfinals against France on Wednesday. pic.twitter.com/1qx48uoeGi

Injuries were always the concern with Team Shamrock, and it’s true that both Marcus Smart and Jayson Tatum have gotten dinged up as part of their Team USA commitments, but the chances of a serious injury—an ACL tear, or the like, are—and have always been—pretty slim.

As trainers have learned more about the sorts of injuries that athletes incur through extended repetitive use (something that previously affected only pitchers), management strategies have improved.

In short: Ten years ago, if you had an ankle sprain that caused you to miss a couple weeks of activity, it was probably severe enough that it would keep you out a month in this environment. Trainers have learned that connective tissue (1) is more prone to wear and tear than previously thought, and (2) takes longer to recover than previously thought.

However, for these young guys, complete recovery is possible, and as long as they avoid re-injury, they should be able to hit the ground running once the regular season starts.

On Monday, following a 16-point outing, Walker was asked if he ever sees himself putting up 25 or 30 points on this team. Walker answered noncommittally, saying his performance depends on what the team needs.

“Just as one of the older guys on this team now, one of the veteran leaders, I just want to set the tone,” Walker added. “That’s what I’ve been trying to do each and every night in these games, pick up guys full court as much as I can. That’s where it’s going to start for us. We’re going to win games on the defensive end. We haven’t been shooting the ball consistently that well. Defense is what’s going to get us over the top. I just want to be setting that tone each and every night.”

I can’t wait for the season to start.