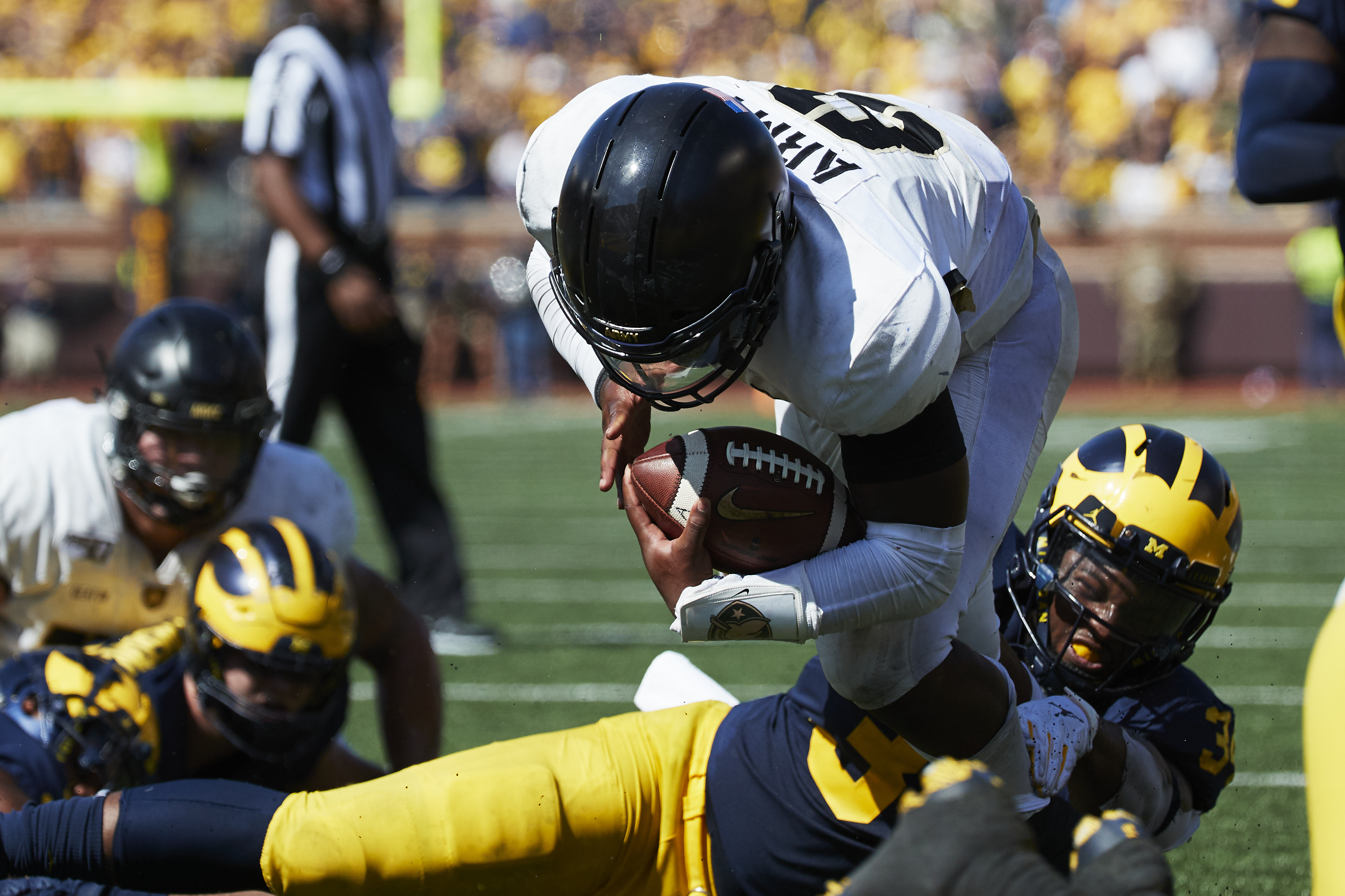 Army nearly shocked the college football world on Saturday when it went in to Ann Arbor and gave No. 7 Michigan all it wanted. The Black Knights led 14-7 at halftime and had a chance to win the game on a field goal as regulation ended before falling in overtime on a fumble, 24-21.

Although the program has witnessed an outstanding turnaround under head coach Jeff Monken and finished ranked for the first time since 1996 last season, Army has had more near upsets than big-time wins in recent years. Here’s a look back at near misses for Army against ranked opponents over the last 25 years.

Army 21, (5) Oklahoma 28
Sept. 22, 2018 (Overtime)
Army never led during its 2018 trip to Norman to take on No. 5 Oklahoma, but did force overtime. With the contest tied, the Black Knights drove into Oklahoma territory late in the fourth quarter, but an interception ended the scoring threat. After Oklahoma’s Austin Seibert missed the potential winning field goal as time expired, the Sooners scored in overtime on a touchdown pass from eventual Heisman Trophy winner Kyler Murphy to CeeDee Lamb. Parnell Motley intercepted Army’s Kelvin Hopkins Jr. on fourth down on the Black Knights’ possession to seal the victory.

Army 17, (21) Navy 21
Dec. 12, 2015
Against No. 21 Navy in Philadelphia to cap 2015, the 2-9 Black Knights led 17-14 at halftime. Navy would regain the lead with less than six minutes remaining in the third quarter on a 50-yard touchdown reception by Jamir Tillman from Keenan Reynolds. After missing a field goal early in the fourth quarter, Army turned the ball over on each of its final three possessions. The Navy win was the 14th straight in the series, but Army would snap that streak the following year with a win over the No. 25 Midshipmen by the same score.

(22) Iowa State 28, Army 21
Sept. 23, 2005
A pair of touchdown passes by Zac Dahman and a touchdown run by Scott Wesley allowed Army to take a 21-14 lead into the final quarter against No. 22 Iowa State in 2005. In the fourth quarter however, Ryan Kock scored a pair of rushing touchdowns to put the Cyclones in front. Army would march inside the Iowa State 25-yard-line on its final possession, but Carlton Jones was stuffed on fourth down with 30 seconds remaining.

Army 17, (18) Notre Dame 20
Oct. 24, 1998
Army led just briefly in South Bend midway through the 1998 season, but tied the game at 17 early in the fourth quarter on a 19-yard touchdown run by Craig Stucker. With just over a minute to go, Notre Dame’s Jim Sanson knocked through a 48-yard field goal to put the Fighting Irish ahead for good. Bobby Williams scored Army’s only other touchdown in the loss.

(14) Tulane 49, Army 35
Nov. 14, 1998
In its third straight against a ranked team in 1998, Army pushed undefeated Tulane until the final quarter, but could not get over the hump. After Criag Stucker cut the Tulane lead to seven in the fourth quarter, the Black Knights drove inside the Green Wave 25-yard-line with less than six minutes to go, but turned the ball over on downs. Tulane quarterback Shaun King, who accounted for 467 total yards and six total touchdowns, put the game away with a 20-yard touchdown. Under Tommy Bowden, Tulane would go on to finish undefeated and ranked seventh in the AP Poll.