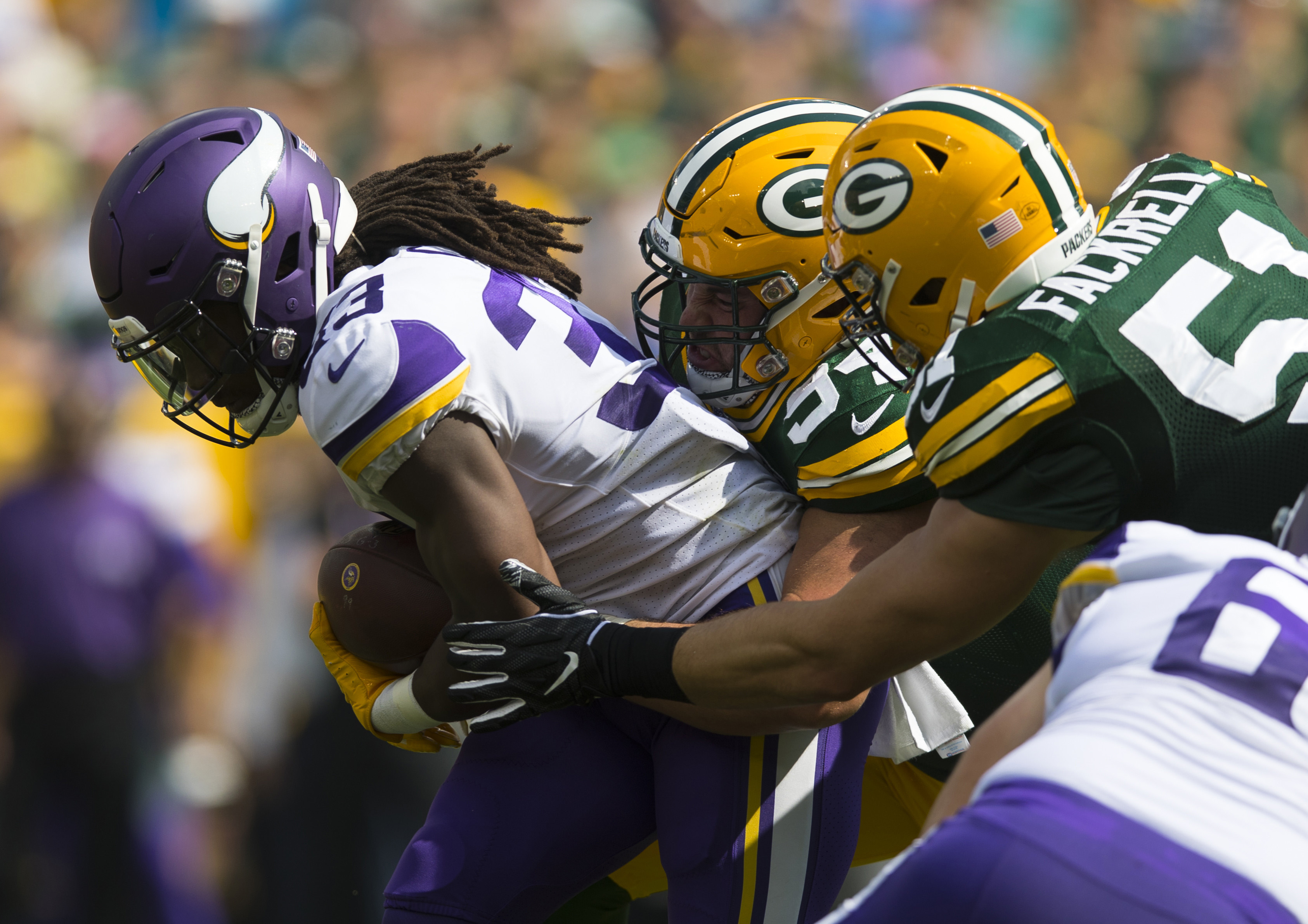 The Green Bay Packers defense opened the season with a very strong effort in their 10-3 victory over the Chicago Bears, pressuring Mitchell Trubisky consistently, limiting the Bears rushing attack and holding the home team to a mere three points. But in Week 2 against the Vikings, the Packers defense will face a new challenge: slowing down Dalvin Cook and the Minnesota rushing attack.

The Vikings under head coach Mike Zimmer and offensive coordinator Kevin Stefanski are determined to run the ball early and often this season. They used that strategy to perfection in Week 1 against the Atlanta Falcons. Cook rushed 21 times for 111 yards and two touchdowns. He averaged 5.3-yards per carry. Meanwhile, his backup, Alexander Mattison, a rookie third-round draft pick out of Boise State, carried nine times for 49 yards and a 5.4-yard average per attempt. As a team, the Vikings rushed for 172 yards, fourth highest total in the league in Week 1.

Because the Vikings jumped out to an early 14-0 lead before the midway point of the first quarter, quarterback Kirk Cousins only attempted 10 passes, completing eight of them for just 98 yards and one touchdown pass.

The Vikings put an emphasis on running the football while the Packers defense under defensive coordinator Mike Pettine, wants to stop the pass first and almost dares opponents to run the football. Against Chicago, the Packers used safety Raven Greene as the hybrid S/ILB. Greene was on the field for most of the game as the Packers stayed in their nickel package extensively. He played well, making six tackles and breaking up one pass as the Pack dared Trubisky to beat them by throwing the football. He couldn’t.

The Vikings will almost certainly try to establish the run immediately against Green Bay. The more they can keep Aaron Rodgers and the Green Bay offense off the field the happier they’ll be. Minnesota also hopes to wear down the Packers defense, especially nose tackle Kenny Clark and inside linebacker Blake Martinez, two of the key run defenders on the field.

The Packers may attempt to counter the run-first philosophy by getting out of their nickel package at least on first down and going to their base defense. With Oren Burks still out of the lineup due to injury, the Packers may turn to former New York Giant B.J. Goodson who they acquired prior to the season opener. Goodson is a run stopping specialist, but he has less than two weeks experience in this defense.

Head coach Matt LaFleur said he expect Goodson to play on defense this week after only seeing action on special teams against Chicago. “I’d anticipate seeing him quite a bit out there,” LaFleur said. “He’s been all ball since the moment he got here. I’m just starting to get to know him as a person, but I know our defensive coaches who have spent a little bit more time with him have been really impressed with him and his football knowledge. You could see it the other day in practice…It looked like he’d been here for a while.”

LaFleur acknowledged that Cook presents a challenge for the defense. “He’s an elite runner and they did a nice job up front and they took it to Atlanta last week,” LaFleur told reporters during his Wednesday press conference. “It was a ball control game and they kept pounding the rock so we know that will be a great challenge for us from a defensive perspective this week.”

The Packers defensive players are all aware of the need to slow down the Minnesota ground game and to limit Cook’s effectiveness.

“He’s a great back. He’s a great player and I think he has the ability to do an all-around back kind of thing where he can come out of the backfield and make plays,” inside linebacker Blake Martinez said. “He’s agile, quick, strong, everything you kind of think of in a good back. He was able to break tackles and do those things that got him those extra yards.”

Defensive lineman Dean Lowry added, “They’re a run-first team so they want to establish that run game and get the play action going so I think it’s huge for our defensive line to stop that run, to play physical in there because that’s really what they’re about, running the football.”

Safety Adrian Amos said the players know what they need to do. “You’ve got to stop the run first and then they’ll have to throw it more,” Amos said after practice on Wednesday. “If you don’t stop the run early, they’re going to just keep running it. We’ve just got to be prepared to set edges, tackle in open space and they do have a passing threat so once we get them to third down, we can get more coverage and start focusing on their passing game.”

“I think it just comes down to understanding the defensive play that we called and understanding what our weakness is on that play and knowing when you can play fast and when you need to play slow,” Martinez explained. “It will allow you to be one to two steps quicker and then you can beat your guy to the punch and make plays in the backfield before Dalvin Cook can keep going.”

While stopping Cook and the running game is important, the Packers also cannot afford to overlook the Minnesota passing attack which is also loaded with weapons including the dangerous wide receiver duo of Stefon Diggs and Adam Thielen.

But the Packers know they need to stop the Minnesota run game first and that this will be a challenge in Week 2.

“That’s always the number one thing is stop the run,” veteran cornerback Tramon Williams said. “You have to do that against any team. We’re going to have to make that a point of emphasis against this team right here.”