Your Morning Dump... Where Team USA lost, but the Celtics win long term 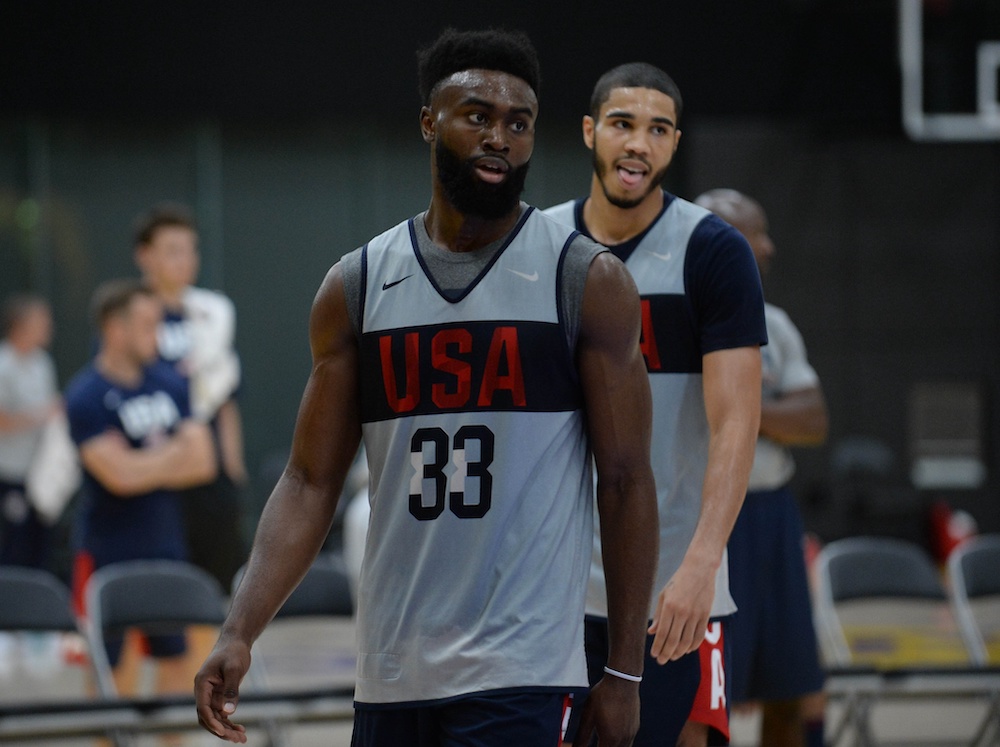 Your Morning Dump... Where Team USA lost, but the Celtics win long term

Team USA fell short of impossibly high expectations, particularly considering how much the talent gap has narrowed in international hoops. When American superstars bailed on this year’s FIBA tournament, it put those that elected to suit up in a tough spot, all while tasked with building chemistry on the fly. Credit Popovich and Co. for not using it as the go-to excuse for why Team USA bowed so early.

The experiences of the past two months will soon benefit Team Shamrock. Maybe it happens when Tatum is at the free-throw line in the closing seconds of an opening-night tilt in Philadelphia and he can step up more confidently knowing the clutch freebies he made against Turkey to force overtime. Maybe it happens a week later if Smart is deployed to defend Giannis Antetokounmpo when the Bucks visit TD Garden on Oct. 30, and Smart can reflect back on his efforts in Team USA’s win over Greece.

Maybe it happens when Brad Stevens deploys Brown at the 4 in small-ball lineups, cocksure in the assignment because of what Brown showed in this tournament. Or maybe it happens whenever Walker looks across the court and sees the like of Gobert or Evan Fournier, and the disappointment of his quarterfinal shooting woes inspire him in an NBA rematch.

If nothing else, Boston’s quartet of Team USA participants should be ready to hit the ground running when camp opens on Oct. 1. They sacrificed their summer with hopes of FIBA gold, but there are much bigger goals for all four of those players in a more familiar work environment.

So, the gold medal chase is over for Team USA in China, and much like how the Red Sox are playing out the string with few people watching, and many players resting, the next few days should have fewer eyeballs at home and fewer uniformed players abroad.

There will be no Marcus Smart tomorrow or Saturday, and likely no Jayson Tatum. There’s also massive disappointment and a bit of ignominy for the four Celtics — they all played significant roles for the usually invincible Team USA, and all will have the stink of playing for the team that lost after 58 straight wins in international competition.

I’m sure the rest of you Celtics fans will argue (and so would I) that if it wasn’t for the play of all four Celtics over various stretches of the last few weeks, the team likely wouldn’t even have made it to the quarterfinals. But let’s not even get into that debate. Instead, let’s do like Chris Forsberg did, and be glad that Kemba Walker, Jayson Tatum, Jaylen Brown and Marcus Smart were part of this experience.

I think the high school yearbook quote goes something like “Don’t cry because it’s over, smile because it happened” (can’t believe I just wrote that in a sports blog).

In addition to the camaraderie and chemistry built between the teammates, the coaching they received, and the pressure-filled reps they got, let’s also recognize how nice it was to have ACTUAL CONTENT IN AUGUST IN SEPTEMBER for a change.

Seriously, any other year, and I’m following up on a third-hand tip that Enes Kanter was spotted at a Dunkin Donuts’ in Downtown Crossing and his favorite donut is, in a controversial choice, jelly.

And we’re just getting started. If just one of these Celtics can make the 2020 team, we’ll have another busy summer.

So thank you, Team USA Celtics, for getting me and the rest of our crew to mid-September. Now we only have to fill two more weeks with stories about summer workout videos and reports from trainers about players’ limitless potential.

Which leads me to…

Though he wasn’t around last season, first-round pick Grant Williams recently said he believes Hayward’s aggressiveness has returned. After competing against Hayward at the Celtics facility, Williams said the forward opened his eyes to the talent level in the NBA and the ability of professional players to hit tough shots.

“Guarding Gordon every day and seeing how much work he puts in his craft makes me very fortunate,” Williams said, “because I not only get to learn from him, but I also get to say, ‘Man, how did he make that?’”

Morrison hopes the young Celtics players also take note of Hayward’s work ethic. Though the summer often gives players a time to rest and recover, Morrison estimates Hayward has taken only a couple of weeks off all offseason. Compared to past seasons, more players have spent time in Boston this summer, working out at the practice facility. Those in the area have noticed Hayward finishing up some of his workouts around the time younger players arrive at the gym.

The Athletic — After a summer based in Boston, expectations again grow for Gordon Hayward

I hate to sound the hot-take alarm, but it’s this year or it’s never for Gordon Hayward.

Nearly two full years removed from the injury, a summer to solely focus on his game and not his rehab, and entering his age 29-30 season, we’re about to find out if Gordon Hayward is on a Paul George trajectory, or a Penny Hardaway trajectory.

Everyone’s raving about his summer, but we’ll have to see what it all looks like in October and November.

I’m excited, but I’m not getting my hopes up just yet. No matter what Scott Morrison, the rest of the coaches, and Grant Williams have to say.