Who: The Indianapolis Colts vs. the Tennessee Titans.

When: 1 PM Eastern, Sunday, September 15. TV: CBS. While this may be an important game within the AFC South, CBS cares little, as they’ve assigned us the middling duo of Spero Dedes and the oft-concussed Adam Archuleta. No one reads this article, so I will explain that, in the past, I have been quite critical of this broadcast team. This past winter, however, I discovered Dedes is actually pretty good – at calling basketball.

No, no, no, not that guy. You need a little luck in any game, right? This is a big game. The Colts can’t afford to start 0-2 with losses against teams who should be in the playoff picture at the end.

After a ragged start, the Colts battle back and take a 2 point lead with 1:37 left. Tennessee moves methodically down the field, with 27 year vet Delanie Walker converting on a couple of 3rd downs, but the drive stalls at the 25. With 17 seconds left, out trots kicker Cairo Santos, who is on his fifth team in five seasons.

Side note: I went to the Titans website to check out Santos’ bio, and get this: The Titans combine each player’s bio into one, 164 page PDF. I can’t begin to tell you how stupid this is.

Anyway, here’s Santos, the kick is up….

In the booth, the oft-concussed Archuleta exclaims, “It looks like a bird hit the ball!” as his partner attempts to decipher what just happened.

Replay shows a disheveled looking man with a thick beard, wearing cargo shorts and crocs, standing near the goal line. The man appears to have thrown something at the ball, causing it to go wide. It’s later determined the object thrown was an ankle brace. The disheveled looking man appears to shout “I’ve given my heart to this team!” before eluding security and racing off down the tunnel, never to be seen again.

Referee Clete Blakeman announces to the crowd, “there’s not a damn thing I can do. The kick is no good,” before racing off the field to a chorus of boos.

After the game, Titans coach Mike Vrabel vows he “will give up sex forever until we get some Luck, err, luck, like that.”

I thought the Colts had a pretty good game on offense last week. Brisket was efficient, Mack trampled people, the line did a decent job (especially on the 2 point conversion, where Quenton Nelson literally destroyed the interior of the Chargers defense). Their efforts were undone by poor special teams and an uneven defense.

Derrick Henry will probably give the Colts defense a hand full, but unless you were asleep last Sunday, you know the Colts can run it a little bit too.

It’s 3rd and 1. Colts have the ball on their 31, needing a first down to salt the game. Mack – at 127 yards and 1 TD – is the easy call to take the rock here. You know this. I know this. Literally everyone knows this except Adam Archuleta, who is still talking about birds.

Brisket takes the snap, fakes a throw, then pitches to Mack. It’s a run to the right! Except…Mack tosses it to Parris Campbell, who has Quenton Nelson in front of him and a whole lot of green space ahead.

Campbell takes it 69 yards for the score. 69 yards. Nice. Replay shows Nelson literally blocked every defender on the field, some of the cheerleaders, Paul Kuharsky, and a CBS cameraman. Big Q happens sometimes.

Hooray for Jessica. I do not dismiss her for her Bears fandom – we all have our faults – nor have I brought up Super Bowl XLI, but that’s because she was kind enough to contribute a few words here.

Jessica didn’t really have anything to say about the Titans – I’m sure because of the fact that literally no one really cares about them – but she remind us of the obvious: Everyone liked them better when they were the Houston Oilers. Who didn’t love Bum Phillips, Earl Campbell, White Shoes Johnson, and then later, Warren Moon? Oilers > Titans.

She did bring up something interesting, though, which is “the shit show that is Broadway in Nashville on a Saturday night.” “10/10 wouldn’t recommend.” PBR heaven? Explains everything.

Lastly, Jessica could not resist taking some well deserved shots at Nashville’s hockey team. She asks the legitimate question of why they call themselves “Smashville” when they have the same number of Stanley Cup titles as we do. Valid question. And the catfish on the ice? A wannabe Detroit. Have you ever been face to face with a catfish? I’m not talking about the one who got the idiot LB from Notre Dame a few years ago, either. Those things are flat out ugly. In light of the Titans uniforms, this makes perfect sense.

According to her bio- I feel obligated to point out that the Eagles cheer squad bios are not lumped into some giant PDF like the Titans do with their players. Just another reason the Titans suck- Talia loves to dance, and loves her dog. Alright.

Sorry, but this looks like one of those annoying, yapping dogs who hates men. But Talia’s eyes though…. 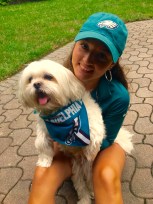 This is Talia with Savannah, her best friend on the cheer squad. (Again, this is according to her bio, which is not lumped into a giant PDF). Nice. 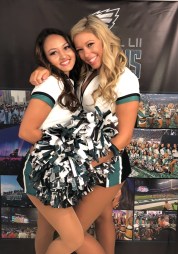 Lastly, Talia was chosen as the cover model for the 2019 Eagles Cheer calendar, and well, I can’t disagree with why… 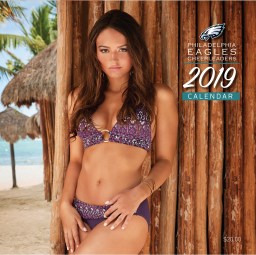