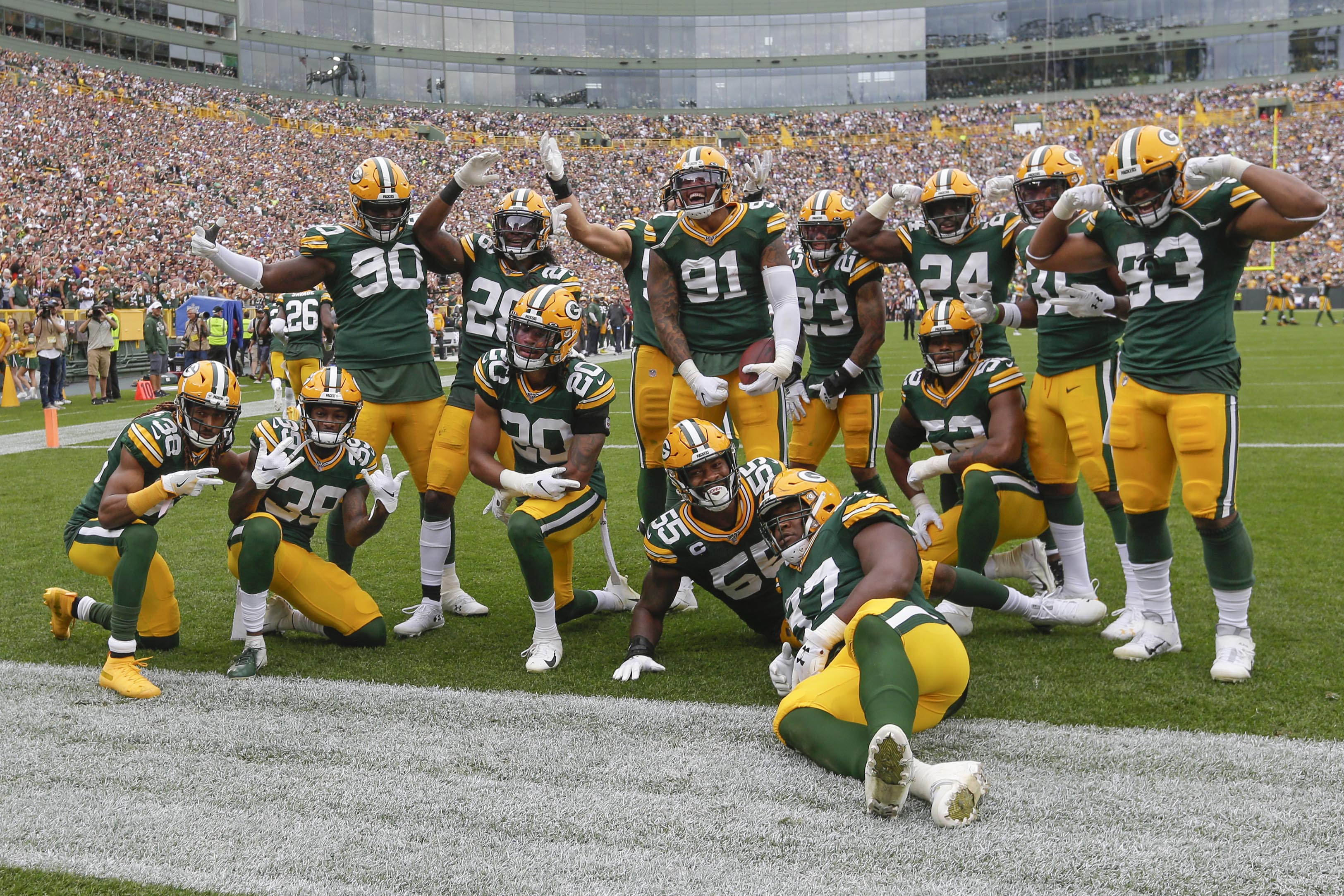 The Green Bay Packers held on for a 21-16 win over the Minnesota Vikings on Sunday at Lambeau Field. The victory gives the Pack a 2-0 record on the season and a 2-0 divisional record. The Packers have now defeated the two teams who are expected to be their toughest competitors in the NFC North this season.

Still, Green Bay didn’t make it easy. The Pack cruised to a quick 21-0 lead before letting the Vikings back in the game. It took a late interception in the end zone by Kevin King to overcome a sloppy second half offensively and a defense that was tiring late in the contest.

Here are 10 things we learned from the Packers victory in Week 2:

1. The Offense Showed Signs of What It Can Be

If Matt LaFleur’s offense was hard to find at all in Week 1, in Week 2 the Packers showed signs of what the offense can be. In the first quarter and very early the in the second, the Packers showed glimpses of how this offense is supposed to look. The team was crisp and quicker out of the huddle, they had a good balance of run and pass and managed to target Davante Adams consistently while still involving other receivers in the passing game. We also saw receivers being schemed open, especially Adams early in the game.

However, that crisp, quick-moving offense didn’t last as the Pack failed to score in the final 42-plus minutes of the game. During that time, the Pack took untimely penalties, dropped passes and worst of all struggled to protect Aaron Rodgers who didn’t look too sharp as a result

The Packers need more time to fully adjust to the offense, but Week 2 was a step forward and showed the potential this system has. Now the Packers need to become more comfortable and execute this offense consistently.

2. The Pass Rush Is for Real

The Packers officially recorded just one sack in this game, which was credited to Kenny Clark, but that doesn’t tell the entire story. Vikings quarterback Kirk Cousins had pressure on him throughout the game and as a result completed only 14 of his 32 passes.

Cousins was harried often, and his two interceptions were the direct result of the Packers pass rush. At the end of the day, the pass rush was the best part of the Green Bay defense in this game.

3. The Secondary Gave Up Too Many Big Plays

When Cousins had time, he made three big passes, a 61-yarder to Chad Beebe, a 49-yard pass to Stefon Diggs and a 30-yarder to Adam Thielen. The secondary held the Vikings in check otherwise but cannot afford to allow so many big pass plays.

When the pass rush didn’t get home, the defense was vulnerable. Losing Raven Greene to an injury didn’t help matters.

The good news was that TE Kyle Rudolph was not a factor and had only nine yards on three catches. Diggs had only one catch and Thielen had four other catches for 45 yards other than that one big play.

Overall, the defense did well enough to contain the Vikings offense but allowed too many long hauls down the field.

4. The Running Game Came to Life

Aaron Jones was back to his previous form. The third-year halfback gained 116 yards on 23 carries for a 5.0-yard average per carry. He was able to keep the sticks moving and the clock moving later in the game and he scored the Packers third touchdown on a two-yard run early in the second quarter.

Jones’ long run of the game was just 15 yards, which means that he was gaining yardage consistently every time he was handed the ball and the offensive line did a much better job of opening holes for the run this week than they did against Chicago.

The Packers were able to exploit the middle of the Minnesota defensive line. Jamaal Williams provided a change of pace and gained 28 yards on nine carries.

The breakdown on the game was 33 runs and 36 times the Pack dropped back to pass, a very even split for the offense.

Ideally, LaFleur wants to run the ball approximately 40 percent of the time. With an early 21-0 lead, the numbers skewed more towards the running game.

5. Aaron Rodgers Is Still Not in Top Form

The numbers were better this week as Rodgers had a quarterback rating of 101.2. He completed 64.7 percent of his passes for 209 yards and two touchdowns while not throwing any interceptions for the second consecutive game.

Still, Rodgers held the ball too long on several occasions and was clearly flustered by the Minnesota pass rush which he felt too often over the course of the game.

Rodgers also underthrew Aaron Jones on in the fourth quarter on a third-down play that should have earned the Pack a key first down. Jones was open but instead of leading him, Rodgers’ pass forced Jones to break stride and come back for the ball and it was broken up.

It will take Rodgers time to become fully comfortable in this new offense and he’s not there yet. Still, it’s way too soon to panic and today’s game was a step forward over Week 1.

Punter JK Scott has another strong game for Green Bay. He punted eight times for a 47.6-yard average and placed one kick inside the opponent’s 20.

As long as the offense remains inconsistent, having Scott as a weapon to turn field position around is critical. The Packers have benefitted from Scott’s kicks in their first two games.

The question now becomes how well he will handle things when the weather gets colder and the winds pick up.

7. Jimmy Graham Was a Non-Factor

Graham was held without a catch and was called for an offensive pass interference penalty that helped derail a Green Bay drive.

None of the Packers tight ends had a reception in this game which may have been partially due to LaFleur wanting to take advantage of the Vikings depleted CB corps. Still, Graham was not a factor at all and had no catches on two targets while Marcedes Lewis was targeted once and failed to register a catch.

The Packers will need more production from their tight ends over the course of the season. They were not a factor in today’s contest.

8. Davante Adams Was Back in Top Form

The Packers quickly established that they were going to get Adams involved in the offense and their top receiver got off to a great start. The big play was a 39-yard catch on the opening drive.

LaFleur also wisely moved Adams into the slot at times and gave the Vikings a difficult choice of moving Xavier Rhodes inside which is not his best position or having a reserve slot corner try to keep up with Adams.

The result was seven catches for 106 yards for Adams who had a very strong first half but was not a major factor in the second half when the offense struggled to move the ball.

It was encouraging for the offense to see Adams back at the center of the passing game and having such an effective game after being a non-factor in Week 1.

The Packers came into this game knowing the Vikings wanted to run the ball with Dalvin Cook and were determined to contain Minnesota’s top back. They couldn’t get the job done, however as Cook ran for a career-best 154-yards on 20 carries including a 75-yard touchdown run that got the Vikings on the board just after the Pack took a 21-0 lead.

The defense seemed to get tired later in the game and the holes were there for Cook to run through. Missed tackles were not as big a problem as they have been in the past, but the Packers still had trouble containing Cook and the result was the Vikings got back into the game and had several chances to win it.

Cook averaged 7.7-yards per attempt, backup Alexander Mattison averaged 6.3 and the Vikings totaled 198 yards on the ground in 27 attempts for a 7.3-yard average for the game. Even if you take away the 75-yard touchdown run, the run defense needs to be better next week.

10. The Defense Made Big Plays

While the defense gave up yards on the ground, they also made big plays that played a big role in the team’s eventual victory. Kevin King’s huge interception in the end zone snuffed out Minnesota’s final chance to take the lead and possibly win the game.

Clark’s sack caused a fumble which Dean Lowry pounced on and helped set up the Packers four-play, 33-yard drive that put them ahead 21-0 on Jones’ touchdown run.

Darnell Savage made a great play to tip a pass by Cousins which was picked off by Preston Smith. Jaire Alexander also broke up a two key pass attempts including one in the end zone that helped preserve the lead.

The defense came up big when it had to and that is an encouraging sign for the Pack.