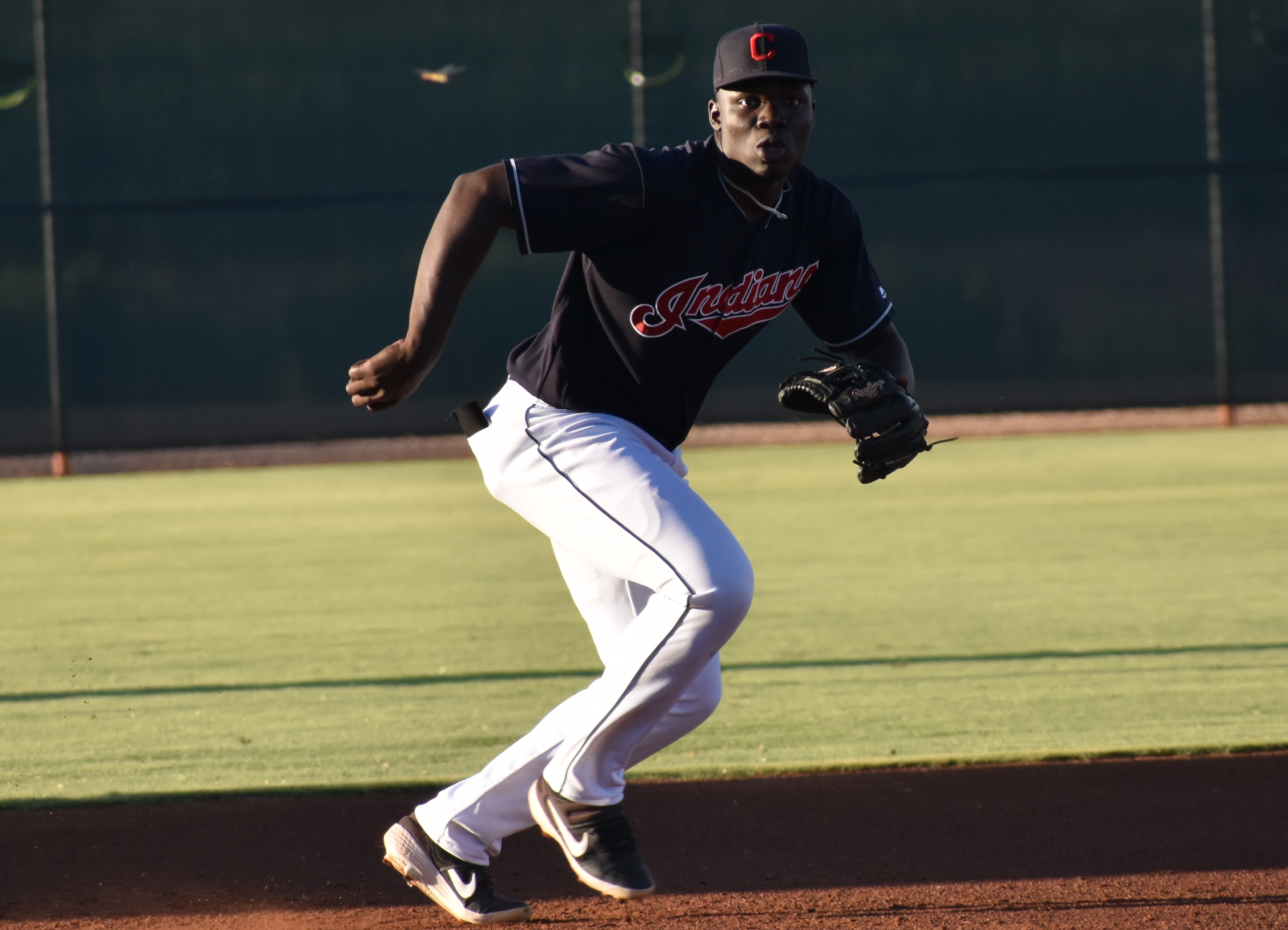 Everyone knows the big names in the big leagues, but here at Burning River Baseball, we like to recognize the little guys. The prospects of today are the All-Stars of the future, but this post is to give them a little credit now. What follows is the Cleveland Indians MVP at each minor league level, their top rookie players, most improved players and best players overall throughout the farm system. These awards are based exclusively on production in 2019 and do not reflect past performances or future potential.

Now, it is time for the individual awards. These can be given to any player from any level regardless of MLB experience or origin with the team. The only exceptions are the two rookie of the year awards which can only be given to a player in his first season in professional baseball.

Bracho sneaks by the tag to score a run for the 2019 AZL Indians Blue. – Joseph Coblitz, BurningRiverBaseball

Injuries cost Bracho his entire 2018 season and much of the second half of 2019, but the glimpse we had in his 38 games this year was one to get excited about. He was one of the top hitters on AZL Indians Blue (.296/.416/.593) when he was active and at one point hit four home runs in six games, immediately followed by a run of eight doubles in 11 games. Arm problems have taken away from his defensive value (moving him to be strictly a second baseman), but he has real power and is great at swinging only at pitches he can drive.

Following the end of regular season in Arizona, Bracho was promoted to Mahoning Valley where he initially struggled, but finished the year hitting .400/.526/.867 over his final five games. He is still just 18, but could reach Lake County in 2020.

Gaddis pitches for AZL Indians Blue during his rookie season

Gaddis was a rare signing for the Indians as an early draft (5th round) college pitcher, but his dominance this year could be evidence that they did well in taking him. He struck out 53 batters to seven walks in 33 innings, incredibly pitching better following his mid-season promotion to Mahoning Valley than he did in the AZL. Gaddis is a 6’6″ right hander who has already turned 21. He brings three plus pitches in his repertoire with excellent control.

The Indians weren’t quite as aggressive this year in promoting players as they were in 2018 with Sandlin, Adam Scott, Palacios and Shane Bieber all flying through the system. Instead, many players advanced just one or two levels as made sense in their development. The biggest leap taken by any one player, however, was Steven Kwan, despite playing the full season in Lynchburg.

Kwan missed most of last season with a hamstring injury sustained while playing for Oregon State, and didn’t make it past the Arizona League once he returned. This season, however, he completely skipped short season and A ball, going straight to high A where he had a really nice season with a .353 OBP and 26 doubles. Kwan has a great contact swing that helps him keep his strike outs down and good speed, helping him fit in nicely at a level where he is nearly two years younger than the average player.

It has been a slow grind for Tom, who began his Indians career in Mahoning Valley in 2015 and was never promoted mid-season prior to this year. Beginning his second season in Akron in 2019, he hit .285/.386/.512 after hitting .245/.329/.399 there in 2018. This was a big enough leap for him to be the most improved hitter in the system, but things got even better. Once he was promoted to the friendly confines (and friendlier MLB baseballs), he improved that hitting line to .298/.370/.564. Never much of a power hitter before this season, Tom set career highs in home runs (23), slugging percent, walks, runs, RBI and triples. Impressively, he hit a new career high with 14 home runs in Akron (previous best was 12) before he was able to take advantage of the offense friendly stadium in Columbus and home run friendly ball in the International League.

Turner has been an underwhelming soft tossing, command lefty reliever for the last two years in Arizona, but really worked hard on increasing his velocity in the off-season and those results were apparent this year. In his first year in short season, he had a 2.90 ERA through six starts and a 1.5 BB/9, then had a similar 2.74 ERA though nine starts in Lake County. He still isn’t missing bats at a high rate (6.4 K/9), but that he has been able to transition from reliever to starter while improving his overall numbers and jumping two levels is very impressive.

Broom warms up in the outfield prior to 2019 MiLB spring training practice. – Joseph Coblitz, BurningRiverBaseball

The Indians had 12 relievers pitch at least 30 innings and strike out at least 30% of hitters and eight who had an ERA below 2.10 with Labaut and Rholl appearing on both lists. However, reliever of the year goes to Broom, who pitched twice as many innings as some of those with ridiculous stats like Labaut and James Karinchak. Only in his second season, Broom pitched half his season in Lynchburg and half in Akron, posting a 0.73 ERA through 62 innings with 70 strike outs and 21 unintentional walks. The side-arming righty was dominant in both the AZL and Lake County last year, but this year’s success in two much more competitive leagues is much more telling of how high his ceiling could be and how soon he could reach it.

There was a ton of competition for best hitter in the Indians system this year, including last year’s winner Freeman, but the edge goes to Tom, largely for his performance in Akron. I’ve already mentioned how much better Tom was compared to his own previous seasons, so now we can look at how he compared to other Indians prospects. Among those with at least 200 plate appearances, Tom came in third in wRC+ (151) behind Jones (153) and Lavastida (165) and was playing at the highest level of the three. He was also ninth in average, fifth in OBP and third in slugging percent. He was also first in line drive rate and didn’t have the kind of crazy HR/FB rate that those who spent the whole season in Columbus enjoyed.

By playing a longer season than many, he had the advantage in counting stats, but still deserves credit for finishing fifth in home runs (two ahead of him were AAAA stand ins, Brandon Barnes and Trayce Thompson), sixth in doubles, first in triples, second in runs and first in RBI.

Finally, while it didn’t enter into this decision, Tom has been the source of highlight reel catches in center all year. When I had the opportunity to view him play the position in Glendale in 2017, he was a reliable, but not particularly outstanding fielder. While basing evaluation of someone’s defense solely on highlight clips can be deceiving, they do prove his range has improved and he committed just two errors this year, his fewest ever in a season. The fact that Tom was able to provide such an exemplary offensive performance while simultaneous playing solid defense in a prime position helped him outshine the other contenders.

Giving consideration to those who pitched a full season’s worth of innings this year (apologies to Espino, Gaddis and Hankins), this was a two man race between two men who split the season between Lynchburg and Akron. While Scott was hurt by an unlucky BABIP, Morgan was more dominant in Lynchburg and spent considerably more time in Akron, ending his season in Columbus.

The two time Indians MiLB starting pitcher of the year threw 140.2 innings this year with a 3.39 ERA, 3.53 FIP, 25.4% strike out rate and 6.9% walk rate. This impeccable command is really what pushed him over the edge as both Draper and Scott walked more hitters, leading to more base runners and, for Scott, more runs allowed. Morgan ultimately finished just behind Draper for second best ERA in the system (80 IP min), third behind Morris and Scott in FIP and K% and fourth in BB% behind Tanner Tully, Michael Peoples and Juan Hillman.

This is just Morgan’s third season with the Indians and he has already traversed the whole system, although he made just one start in Columbus this year. Overall, he has a 3.08 ERA, 10.2 K/9 and 1.3 BB/9 in 319 innings. While he should start 2020 in Columbus, he will absolutely be a real option for the Indians MLB rotation by mid-season next year.

Draper looks in for the sign during extended spring training 2018. – Joseph Coblitz, BurningRiverBaseball