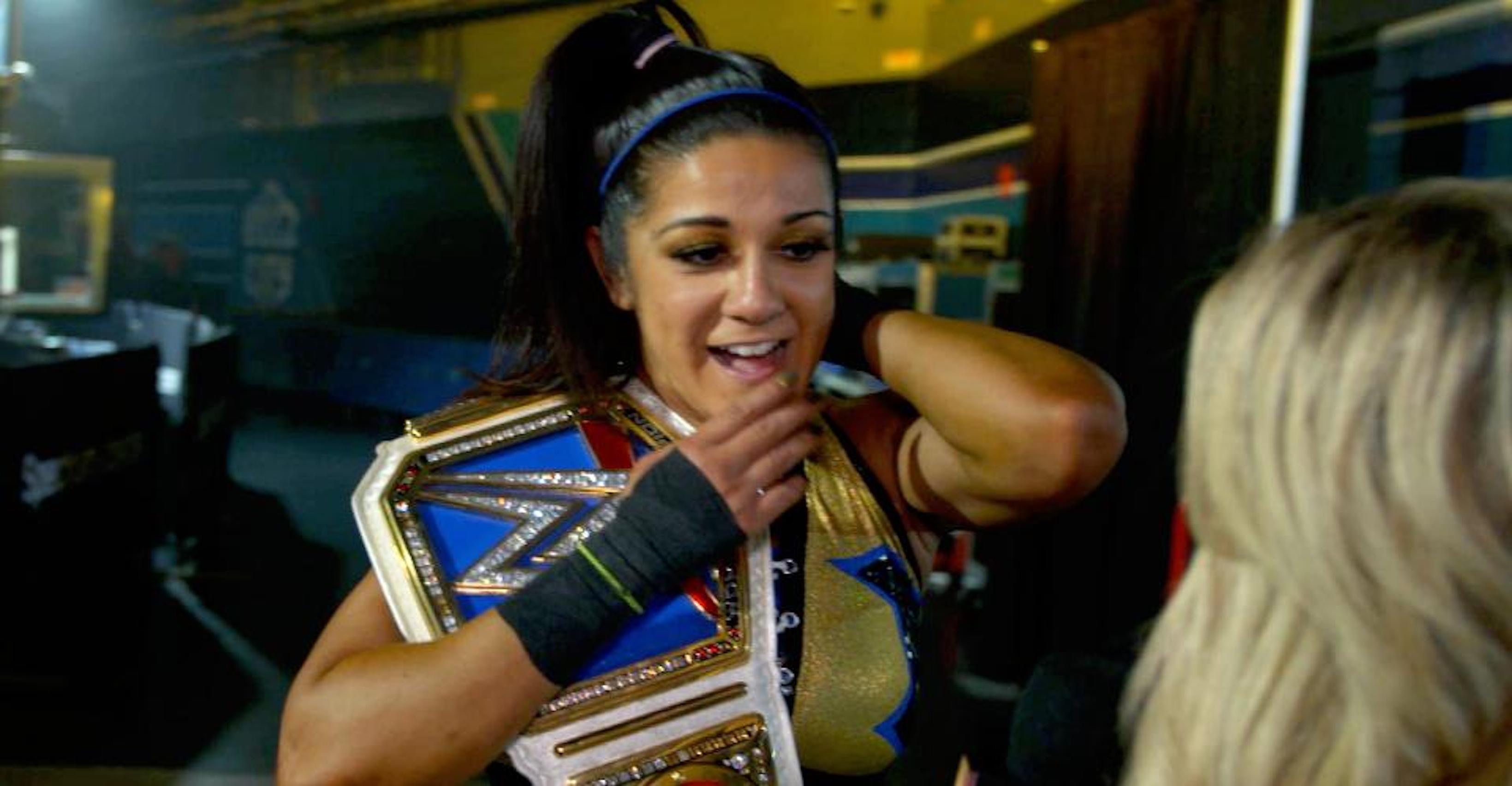 Bayley retained the SmackDown Women’s Championship against Charlotte Flair at WWE Clash of Champions on Sunday, September 15. The champ came into the match as something of an underdog because Flair was in her hometown, but that apparent advantage ultimately did not affect the match’s outcome.

Many WWE fans were outraged by that outcome, which saw Bayley win by devious means when she slammed Charlotte’s head into an exposed turnbuckle hook. Bayley got the quick pin in an even quicker match, leaving fury in her wake. But the fact is that this match was perfect for the feud that’s to come.

WWE has a history of nonsensical booking and that trend continues today. There is no denying that. The company veers left, when all signs point to a right turn. Titles shots are given on a whim and storylines change at a moment’s notice. Anyone who watched the drama unfold between Flair and Bayley were likely taking these facts into account and that’s understandable.

But the simplest point regarding this bout is perhaps the most obvious. What else should WWE have done? Should Bayley and Charlotte have been given 20 minutes of a hard-fought match that could have gone either way? If Flair was not meant to win the title, then would a loss after that match have been received well by the Charlotte crowd? Or would it have been worse?

If the two Superstars had competed at that level and turned in an instant classic, then what would have become of Becky Lynch versus Sasha Banks? The two women battled over the Raw Women’s Championship later in the show and actually did present what many fans believe was the match of the night. Would that be the case if it had followed such a match between Flair and Bayley?

While it seems fair that every match be given an ample amount of time to entertain, the truth is that’s not the case in WWE. Vince McMahon’s company is not New Japan, or AEW, where each match seemingly goes as long as it needs to in order to tell epic stories. Diehard professional wrestling fans more than appreciate that type of show and they’re certainly more than happy when they get it.

But the mainstream WWE audience is not comprised of diehard professional wrestling fans. That fact, combined with the reality of 11 matches, means that each one could not possibly last 20 to 30 minutes. Whether or not it’s fair that Charlotte and Bayley were supposedly shortchanged, is not really the point. This is WWE and it’s how the company rolls. Fans can choose to hate that, but what’s the point?

Then there’s the fact that Bayley is hotter than she’s ever been, thanks to her recent heel turn. The bombastic hugger is now the self-righteous heel and she’s fully embracing her new role. But what happens to her if she comes into Clash of Champions and loses the SmackDown Women’s Championship? How exactly does that benefit her new high-profile run in WWE?

Bayley has made a point to remind everyone of just how despicable Charlotte Flair has been in the past and it’s a point that’s worth repeating. The WWE faithful typically has a short term memory for such matters, thanks in large part to the frequency in which WWE changes course creatively. Oftentimes, it’s difficult to remember what’s going on from one day to the next.

But from a historic perspective, Charlotte Flair should absolutely be cheated out of a win. This is the same Superstar who has virtually monopolized the entire WWE women’s division for four years and she’s done it with an entitled arrogance that’s unparalleled. While she’s obviously not been in charge of her own booking, this is precisely how fans have viewed her and for the most part, they’ve hated her for it.

She’s been presented as the privileged champion, as the woman who simply walked into WWE and was handed a Hall of Fame career on a silver platter. This is done by design of course, because it works for her cause and keeps her on top. But even though her booking has been obvious to many, that has not prevented her critics from despising her for everything she supposedly is.

That pseudo-reality was exposed in 2018, when she stepped into Becky Lynch’s way at SummerSlam. The Irish Lass-Kicker saw Flair’s inclusion in the SmackDown Women’s Championship match as selfish grandstanding. Flair was upstaging Lynch and taking what she had earned. The crowd wholeheartedly agreed and caused Becky’s heel turn to go babyface, and instead turned Flair heel in the process.

This is the Charlotte Flair that Bayley is now hinging her heel turn upon. Fans may not want to admit it, but Bayley is right. Her win over Charlotte, while indeed cheap, was warranted in her mind and it was also warranted in terms of history. So how exactly does this play out now that Clash of Champions is over?

If WWE continues with this feud, then everything is currently as it should be. Bayley escaped with her championship, Charlotte was robbed and both are in the same place they were before their match took place. Both Superstars have been protected. This is one area in which WWE often fails, but not this time. Now that they’re back at square one, the only question is, what’s more important to the company?

Is Bayley going to become the most hated, most dominant women’s champion in WWE? If so, then everything that happens from this point on will be to build that run. She will continue to take the low road, she’ll get worse and eventually, there will be no defending her. Or will this entire angle be just another way to elevate Charlotte Flair back to championship glory once again?

The outcome of this feud is unknown and the fact is that WWE could go either way. But both Superstars are two of the most compelling characters that the company currently has, which means they will surely make magic together now. WWE fans will most certainly go along for the ride, even though they may love, or hate, what happens next.