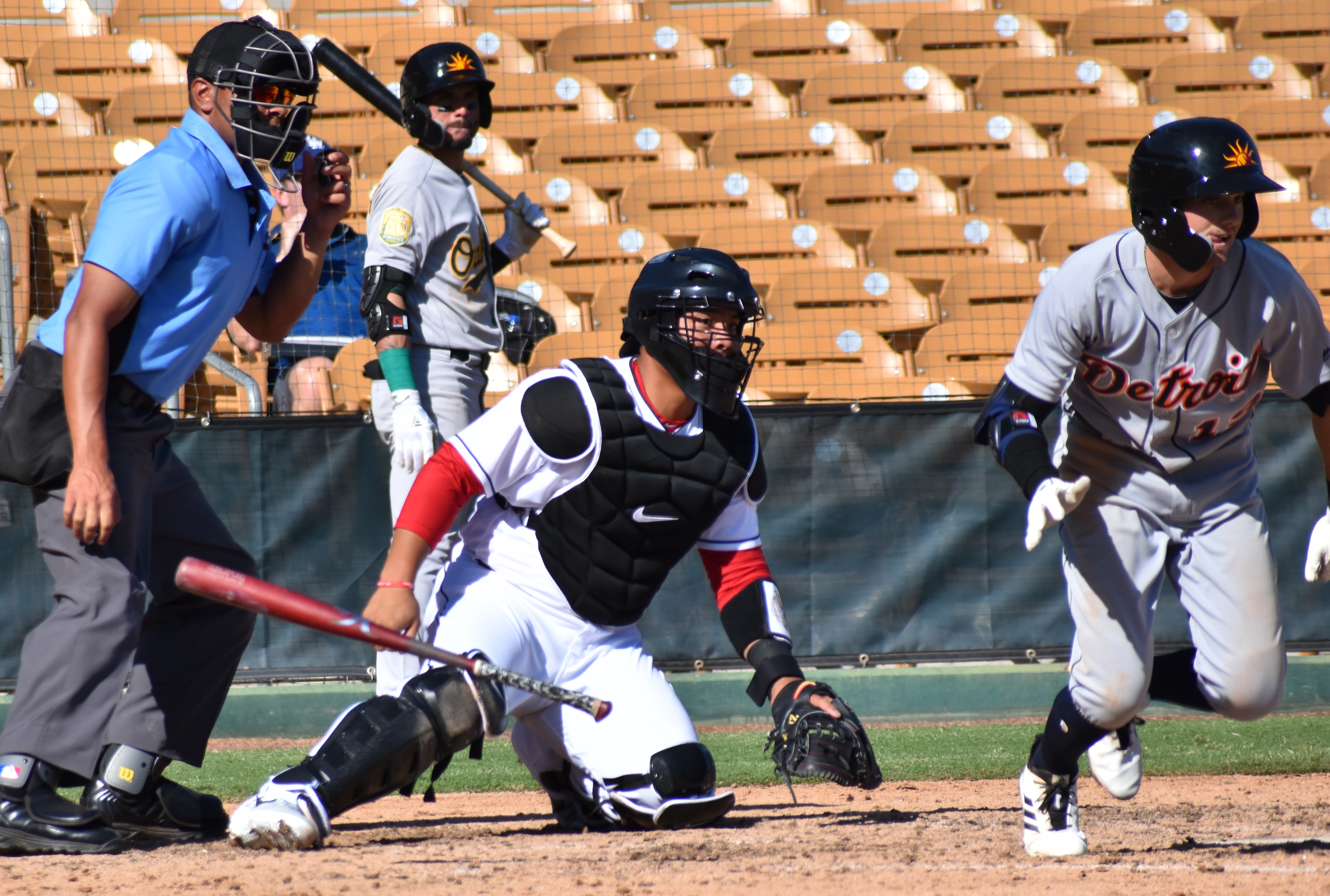 You may be asking yourself, how does one wear the sun on their feet exactly, but it doesn’t matter. The Arizona Fall League is starting up early this year and clad in new logos around the league, some of baseball’s best prospects will be participating. Last year, the Solar Sox finished second in the East, just one tie behind the division winning Salt River Rafters. This year, they have switched out the Red Sox (moved to the Peoria Javelinas) for the Indians and will be returning the Cubs, Athletics, Tigers and Angels.

There is always a mix of top prospects, those who missed significant time in the regular season due to injury and are trying to catch up and borderline players who their teams are trying to learn more about in the AFL, but this year, the number one prospect participant will be with the Solar Sox. After Surprise had all the fun last year with a great group of Blue Jays, the Angels will be sending their top prospect and #4 in all of baseball (according to MLB Pipeline) Jo Adell to Mesa.

Adell is a 20 year old former first round draft pick (2017) and just wrapped up an excellent season that ended in AAA. Overall, he hit .289/.359/.475, but only played 76 games as he was held out from the beginning of the season through May 23rd. Because of the missed time, the AFL will make this more of a regular length season for Adell rather than an extra long one.

Tigers OF Cameron hits a fly ball during the 2019 AFL Fall Stars Game as a member of the Mesa Solar Sox. – Joseph Coblitz, BurningRiverBaseball

Top prospects joining Adell will be Indians #1 offensive prospect Nolan Jones (#38 in all of baseball) and Cubs catcher Miguel Amaya (#88 overall). Nico Hoerner was also slated to join the team, but was called up by the Cubs on September 9th.

Jones could be an interesting case this fall, as the Indians have sent a couple top prospects in recent seasons to the Arizona Fall League to learn new positions/improve defensively. In 2018, normal short stop Yu Chang played the first half of the season at third base and the second half at second and is now being used as the starting third baseman in the big leagues. The year before, Francisco Mejia was forced to split time between catcher and third base as they tried to find a fit for him on the big league roster.

Jones is already at third, but defense has always been the weakest part of his game. While his numbers in Akron were the best in his career defensively, he still has a career fielding percent below .900 and those with eyes on him have always questioned his glove. In Arizona, he could either laser focus on improving at third or potentially switch positions (first base and corner outfield have been suggested in the past).

In addition to Jones and Adell, other first and second round picks for the Solar Sox include right handed pitcher Alex Lange (2017) and outfielder Derek Hill (2014) of Detroit, infielder Jahmai Jones (2015) and outfielder Brandon Marsh (2016) of Los Angeles and outfielder Greg Deichmann of Oakland.

In addition to the season beginning about a month earlier than normal this year, games will be pushed back from a standard start time of 12:30 pm to 6:30 pm. With the earlier start in the year, the later start in the day is necessary to avoid the extremely high temperatures.

To add one more wrinkle in the season, some of the fall league teams will be playing games against Mexican Pacific League teams. Mesa will play Los Mochis on September 25th and 29th in Mesa, then Culiacan in Tucsan on October 5th as part of the Mexican Baseball Fiesta.

As there is ongoing construction for next spring training at both Scottsdale Stadium and Surprise Stadium, there will only be four active locations for the six teams this year, Camelback Ranch (Glendale Desert Dogs), Peoria Sports Complex (Surprise Saguaros and Peoria Javelinas), Salt River Fields (Salt River Rafters and Scottsdale Scorpions) and Sloan Park (Mesa Solar Sox). The Fall Stars game will be played at Talking Stick on October 12th as will the championship game on October 26th.