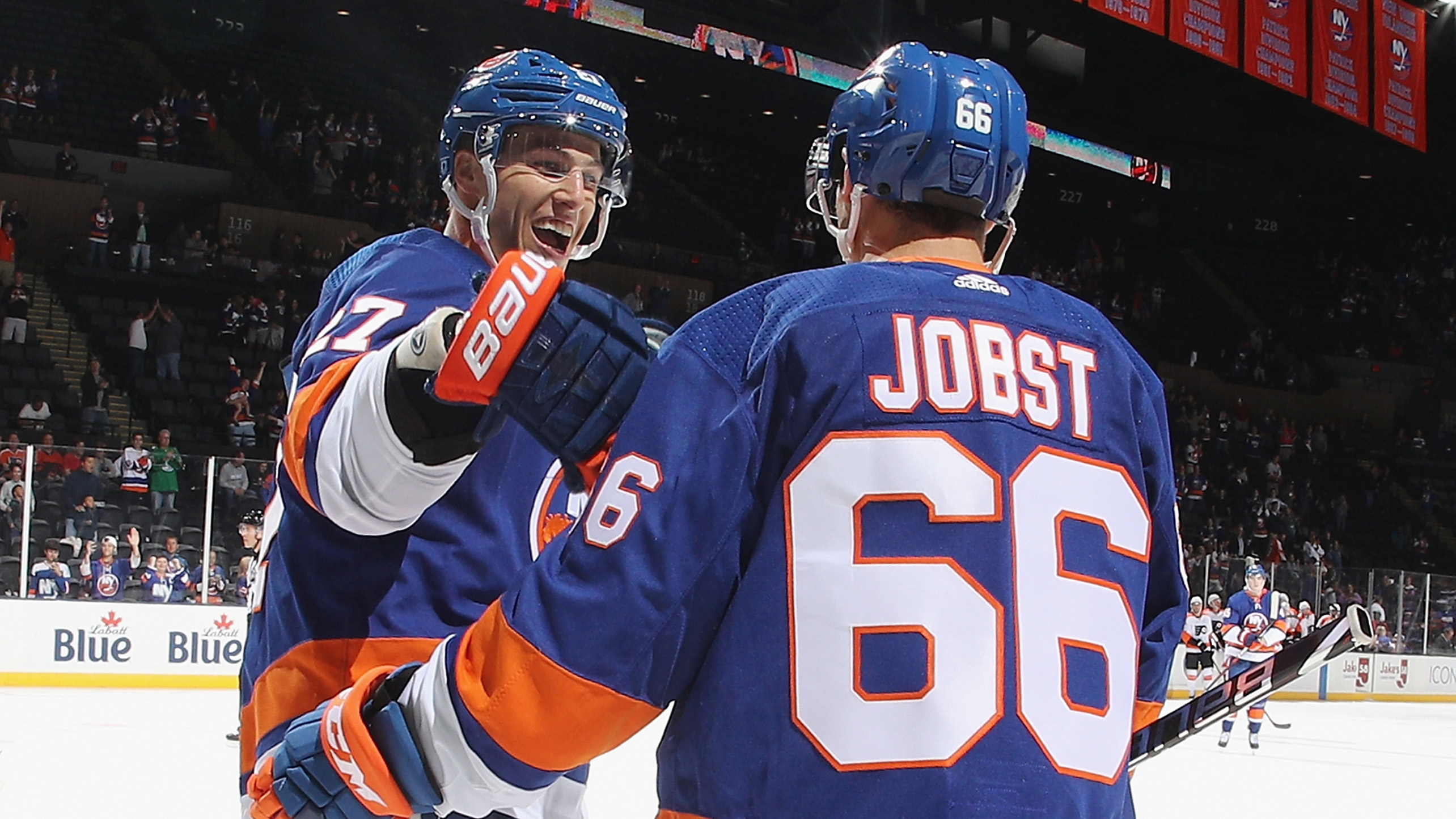 UNIONDALE, N.Y. — Mason Jobst was the overtime hero on Tuesday, scoring the game-winner at 4:07 to lead the Islanders to a 3-2 win over the Philadelphia Flyers.

In case you were wondering, Mathew Barzal is still good. The third-year forward had a pair of impressive assists on Derick Brassard and Jordan Eberle’s goals, but he wasn’t the only young guy to have an impact.

Obviously, it was Mason Jobst who scored the game-winning goal in overtime on Tuesday night. The Islanders had signed Jobst as a college free agent in April and he was appearing in his first preseason game of the year.

“It was a pretty cool moment to be out on the ice in the three-on-three,” Jobst said. “Gave me a little bit of confidence and obviously with the guy’s I’m playing with. Just went to the net hard and that was a pretty lucky bounce. Didn’t really have to do much there.”

YEAH BABY! Getting the JOBst done in OT. 👏👏👏 @M_Jobst pic.twitter.com/uFQkDNp0dn

Islanders head coach Barry Trotz said that the players on the ice late in the game had earned their time, rather than just throwing players out there to see if they could handle the spot.

“I would say probably on 80 percent of the times they were earning it,” Trotz said. “I was moving guys around based on performance. … I was trying to reward some guys that were going pretty good.”

The vote of confidence certainly meant something for Jobst. The 25-year-old rookie saw 13:04 of ice time against the Flyers, which included 2:10 of power-play time.

Jobst will most likely start the year in AHL Bridgeport, which made Tuesday so special.

“It just gives me confidence and shows that they believe in me and my skill set,” Jobst said. “They’re giving me that chance and that opportunity. It’s kind of the same with the power play, so it’s good so far and have to build off tonight.”

Anders Lee doesn’t often get into a fight during the regular season, but in Tuesday’s preseason game he had to drop the gloves. It wasn’t much of a fight with TJ Brennan, but it highlighted the chippiness of the Islanders’ second preseason game of the year.

“That happens sometimes in preseason,” Lee said. “Guys are trying to make an effort and make a name for themselves, or get on the board or get in the game. That’s just how it goes. I thought Ross (Johnston) and (Kurtis) Gabriel showed a lot of heart there with a good fight.”

The fight Lee was referring to was the second-period scrap between Johnston and Gabriel at 15:20.

Islanders got off to slow start

If there was one thing that was echoed in the Islanders dressing room and by Trotz afterward, it was about the slow start the team got off to. In fairness, for every player on the ice on Tuesday, it was their first real game action of the year.

So it’s somewhat expected that it would take a few minutes to shake the rust off, which they did eventually do.

“We started pretty slow tonight. Not where we wanted to be,” Lee said. “Once we kind of figured it out we got back to our game. We really turned the tide on things a little bit. Give them credit for the start that they had. I think their mentality was right from the get-go and we just had to fix ours a little bit.”

"I thought some guys really showed a lot of confidence out there. Our young guys have some bright futures ahead of them and they are just getting their feet wet." – @leeberr09 pic.twitter.com/5l5h9CmHdY