Who: The Atlanta Falcons vs. the Indianapolis Colts.

Where: Lucas Oil Stadium, Indianapolis, IN. It’s about damn time they had a home game.

No, no, no, not that guy. We’ve all heard the sayings about luck. “Luck favors the prepared.” “You make your own luck.” Stuff like that. Whatever.

No one reads this article, but if you do happen to find it, you probably already know about the struggles of Adam Vinatieri. My personal opinion is he’s (still) hurting, but they’re denying it because the Colts are Stalin era Soviet Russia about injuries if they can be. After this many years of kicking, he probably deals with a lot of arthritis-type issues. There’s been a couple of bad holds, every kick he missed in Sandy Eggo was at the same end of the field…seems more than just suddenly not being able to kick straight. In the words of noted poet Chubbs Peterson, it’s all in the hips. Unless it isn’t. Eventually we’ll find out the truth. In the meantime….

After Vinatieri misses a 27 yard field goal before halftime, Adam Schefter tweets out: “Source: Colts K Adam Vinatieri retiring effective immediately.” It’s not true, but when the Colts return to the field after the half, Vinatieri is met with a chorus of boos. Schefter later tweets a half-assed explanation: “I tried to call the Colts, but no one answered.” Like before, it’s a lie.

There’s just 47 seconds left, and the Colts trail by 2. Vinatieri has no place to hide, and when he comes out to attempt the 39 yard kick, the crowd reaction is less than favorable, and he looks shaken. As he lines up, Atlanta uses their final timeout to ice him.

While the players are milling around, a disheveled looking man with a thick beard, and wearing cargo shorts and crocs, races onto the field. He pats Vinatieri on the helmet, then hands him what is later determined to be an ankle brace. TV catches him shouting “I gave my heart to this team!” as he races off the field, eludes security, and disappears down the tunnel, never to be seen again.

Ankle brace in hand, Vinatieri puts his entire soul into the kick. It’s long enough, he shimmies like he’s dancing with the stars…and….the ball doinks off the crossbar, and again, and again…and 14 more times before falling over. It’s good!

Atlanta still has a few seconds left, but the game ends (predictably) when Malik Hooker picks off a Matt Ryan pass that everyone is wondering why he even threw in the first place.

Post game, Chris Ballard fumes about the mole in the Colts organization, and vows “swift action against everyone involved.” Days later, grainy video surfaces of Schefter being held somewhere in Siberia.

The author is pleased by this development. Sometimes I get stuck coming up with stuff for this article no one reads, so I reach out to random people for help. Most of them…aren’t very helpful.

The QC, however, did drop something random that I will run with here:

“The refs will be little b**ches making horrible calls left and right. Later it will be leaked by TMZ that a ref missed a call because he was checking out the cheerleaders’ stellar dance moves and watching them shake their bonbons.”

I mean, she’s not wrong, even though we know horrible calls left and right happen only on NFL game days that ends in “y.”

I too would probably be making horrible calls left and right and watching this cheerleader shake her bonbon, except she won’t be there…. 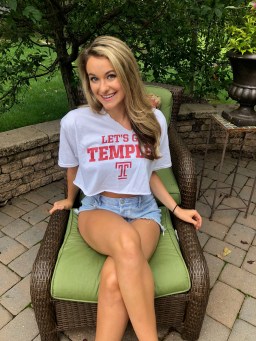 Next up we have Lauren with her best cheer friend Hayley. Nice. 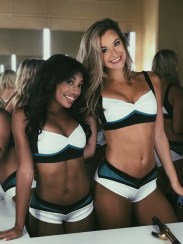 According to her bio, Lauren likes to travel and her favorite place is the beach.

There you have it, folks.