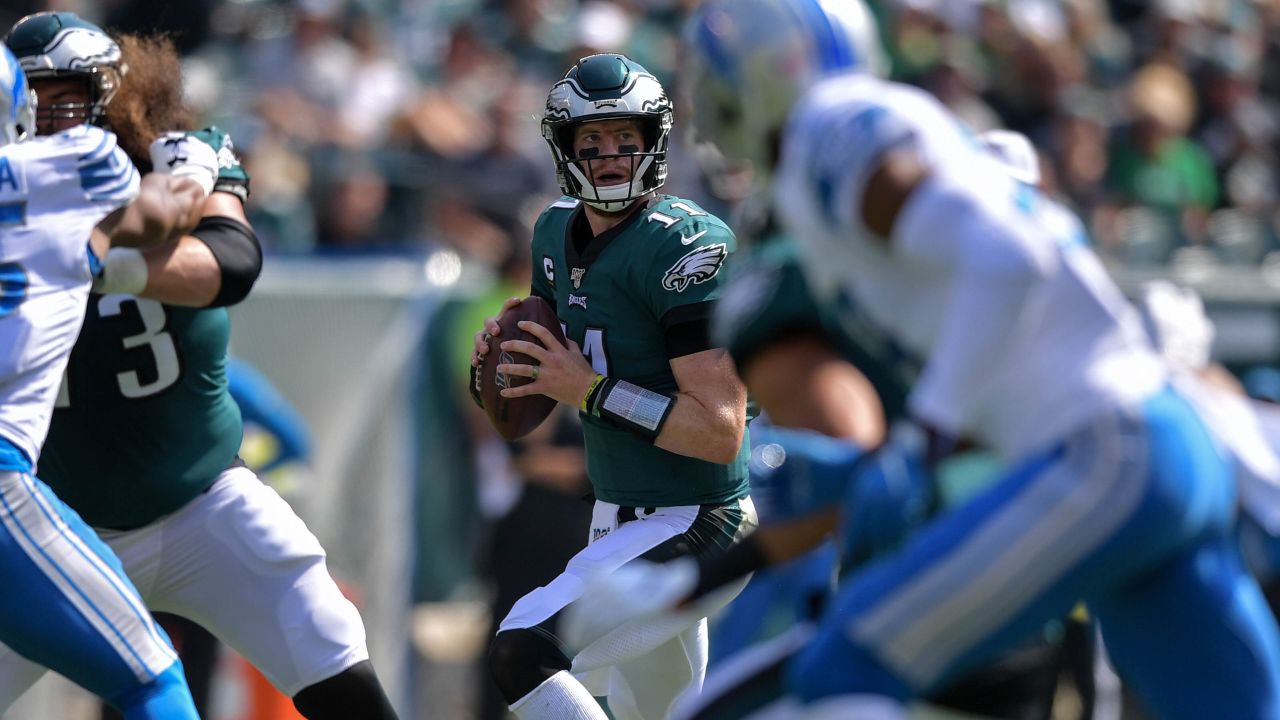 I’m not one to pile on a team which is struggling, but…the Eagles are their own worst enemy right now.

With only three days to recover before taking on Green Bay, things do look grim. The baffling part is if they had just played their “B” game, they should have handled Detroit. Unfortunately they rolled out their “D” game on offense, where D stands for “drops”—and fumbles and OPI penalties by association.

The Eagles hung around despite four quarters of “offensive interruptus” and only trailing by 3 still had a chance after Malcolm Jenkins blocked Matt Prater‘s 46-yard field goal try with 1:53 left. Rasul Douglas returned it to the Lions 22, but an illegal block on Jenkins pushed it back to midfield.

On fourth-and-5, Darren Sproles caught a pass for a first down but got called for Philadelphia’s third offensive pass interference. Wentz’s deep pass to J.J. Arcega-Whiteside fell incomplete with 41 seconds left. The rookie receiver said he should’ve caught it.

“It’s the moment you ask for and dream about,” Arcega-Whiteside said. “I gotta make the play.”

For Detroit, Jamal Agnew quickly made up for two fumbles in his previous two games and the defense stepped up for Detroit when their special teams almost blew it.

Matthew Stafford threw a touchdown pass to Marvin Jones, Agnew returned a kickoff 100 yards for a score and the Lions held on for a 27-24 victory over the Philadelphia Eagles on Sunday.

Agnew got Detroit started by going the distance after Philadelphia jumped ahead 3-0 on their opening drive. Eventually Marvin Jones had six catches for 116 yards, including a 12-yard TD reception that extended Detroit’s lead to 27-17 on the first play of the fourth quarter.

Carson Wentz threw a pair of touchdown passes to Nelson Agholor, but came up yards short on a scramble on fourth-and-8 late in the fourth.

“Can’t make excuses,” Agholor said. “We had opportunities. We have to make plays.”

The Eagles cut it to 27-24 when Wentz threw a 2-yard TD pass to Agholor with 6:59 left. Penalties cost the Lions on that drive. A late hit on Wentz against Trey Flowers extended it and an unnecessary roughness call on Jarrad Davis moved the ball to the 5.

Wentz threw a 20-yard TD pass to Agholor in the third quarter. But the Lions answered with Stafford’s TD to Jones.

Sanders fumbled twice on one drive and Detroit recovered his second one. That led to Prater’s 25-yard field goal and a 17-10 lead.

Jordan Howard ran in from the 1 after Wentz scrambled 19 yards on third-and-6, giving the Eagles a 10-7 lead in the first quarter.

Some reasonable observations from “Roobs” in the midst of some horrible overreactions by many Eagles fans:

1. I’d love to sit here and say it’s still early, it’s not time to panic, there’s a lot of football to be played. But I’m not sure you lose to the Lions at home and survive that. The Eagles are 1-2 with a game on Thursday night against the Packers in Green Bay, where the Packers have never lost on a Thursday night. After the Jets comes three straight road games — with Tom Brady and the Patriots and Russell Wilson and the Seahawks looming after that. The schedule is brutal, and when you have a team like the Lions at home, you can’t afford to give that one away. But that’s exactly what the Eagles did. Wasted opportunities. Fumbles. Dropped passes. The Lions were the better team, they were the better-coached team, and they deserved to win.

2. These games just keep following the same pattern. Halftime deficit, desperate rally. Three weeks in a row now, the Eagles have trailed at halftime — 10-7 on opening day, 10-6 in Atlanta, 20-10 Sunday. They bounced back easily against the Redskins, rallied to take the lead against the Falcons, only to lose it, and outplayed the Lions in the second half Sunday, only to fall short once again at the end. This is the first time since 1982 the Eagles have trailed at halftime in each of their first three games, and I don’t care how exciting the games get at the end, you can’t win this way. The Eagles did score a TD and FG on their first two drives, but the bottom line is they have yet to play a complete four-quarter game. This is on Doug Pederson. This team hasn’t played 60 minutes yet. And that’s the biggest reason it’s 1-2.

3. I know JJ Arcega-Whiteside is a rookie. I know he’s playing in only his third NFL game. Still. Catch the football. Carson Wentz put it right there. Catch the football. It would have been a great catch, but this team desperately needed someone to be great and it just didn’t happen.

4. My biggest concern with this team before the season was pass pressure, and here we are three games in and the defense has two sacks — one by a tackle and one by a safety. This is the first time since sacks became an official stat in 1982 the Eagles have had just two after three games. Now, there’s more to pressuring a quarterback than getting sacks, but the pressure has been spotty as well. If you can’t pressure the QB, it’s really hard to win.

5. It was encouraging to see Miles Sanders come to life a little bit. He was never much of a receiver at Penn State, but he had receptions of 40 and 33 yards and was more productive as a runner than he has been, finishing 13 for 53 after another sluggish start. But he also fumbled twice, lost one, which led to a Detroit field goal. It was a problem at Penn State and it was a problem Sunday. And it’s a problem he has to solve because I don’t care how much talent a running back has, if you keep giving the other team the football, you’re not going to play.

6. The Eagles weren’t terrible defensively. They gave up 20 points to a pretty high-powered offense and six of the points came on short fields. I thought the young corners, in particular, played really well against some high-powered receivers. But when the defense really had to shut down the Lions, it let ‘em go 75 yards in nine plays over the end of the third quarter and the start of the fourth. With an offense missing all those guys, the defense had to win this game. It didn’t lose it, but it didn’t win it either.

7. Two weeks in a row now Nelson Agholor followed a costly play (60-yard TD drop last week, fumble this week) with a big-time play (43-yard catch last week, two TDs this week). I give the kid credit for his mental toughness, being able to stay up and stay ready and make a big play. But, man, he’s the only experienced receiver on the team right now. He’s got to find some consistency in his game.

8. Wentz’s final numbers were pretty good — threw for 259 yards with two TDs and no interceptions. I’m not sure what else he could have done without three of his top five weapons. Those two drives at the end of the game with the Eagles down three were agonizing to watch. He didn’t make any plays, but I just didn’t see any plays out there for him to make, other than the final play to JJAW.

9. Mack Hollins followed his 5 for 50 with a 4 for 62, and for a guy who started the season as the Eagles’ fifth receiver and really not even a lock to make the roster, I’ll take that from him. He’s not a great receiver, but he’s shown up the last two weeks when a lot of people haven’t.

10. Finally … I never complain about the refs. But the non-call on Miles Killebrew’s facemask on Sanders was about as egregious a non-call as you’ll ever see. The NFL talks a lot about player safety and then every ref on the field misses a guy ripping a dude’s helmet off and cackling about it on the sideline? That’s just outrageous and inexcusable. That simply cannot happen.

Eagles: CB Ronald Darby (hamstring) and LT Andre Dillard (knee) left in the first half. Jason Peters left the game early with a feeling of “sickness”…It fell to “Big V” to finish the game at LT for the Birds.