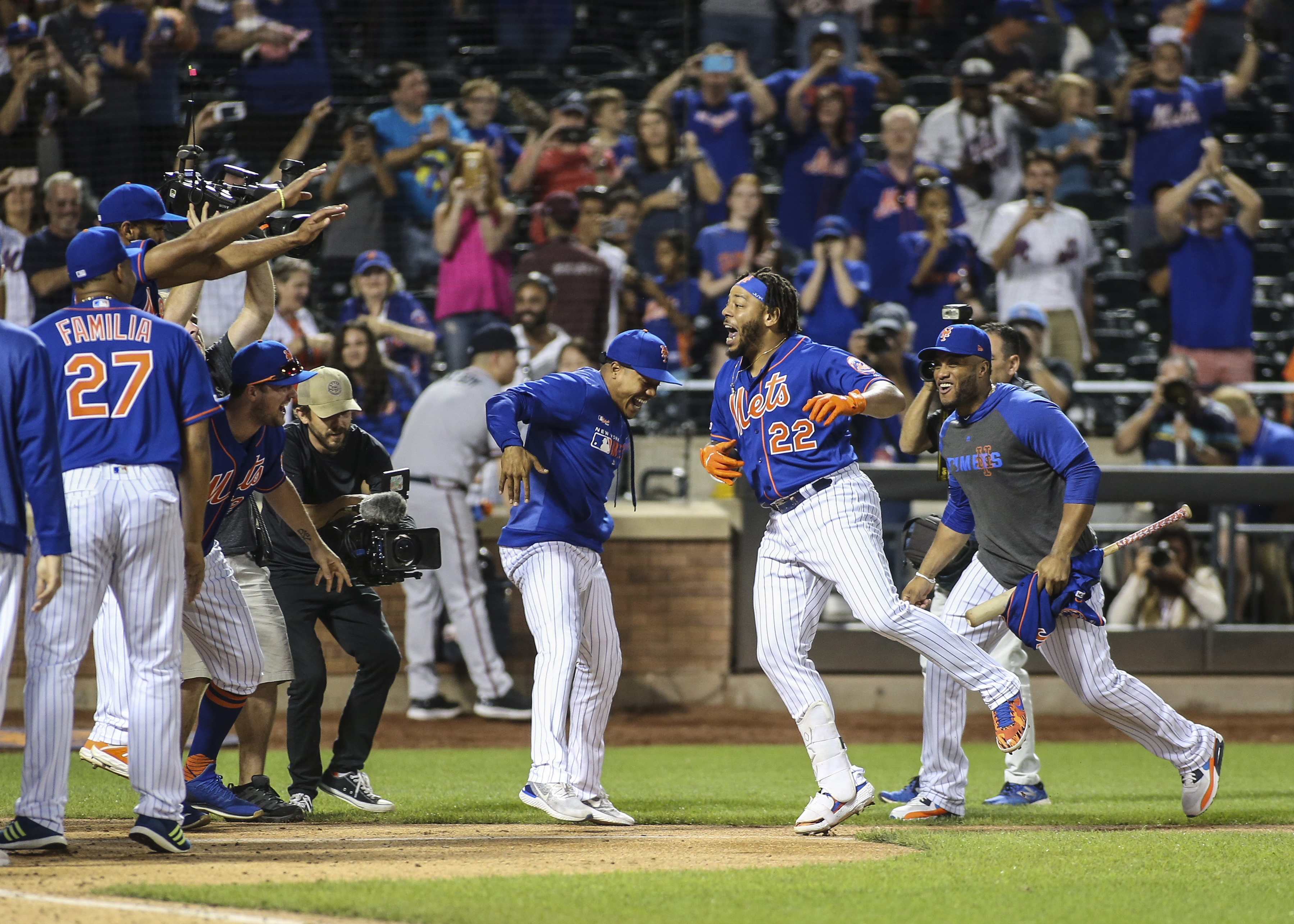 The last swing of the 2019 Mets season reminded us that at the crux of baseball lies heart and soul. Humans play these games, and they create visceral human reaction. I got home tonight knowing the game had reached the 10th, and was recording it for later viewing. My wife asked if I wanted to watch or save until later. Initially I said turn it off. I’ll watch it later. But at the last second I said “screw it, turn it on.” It was 6-4 Braves in the 11th with Dominic Smith at the plate in his first at-bat since July. Oh well, whaddaya gonna do.

With the Mets it can seem like it’s mostly sadness, but there was plenty of euphoria since 40-51. Dom Smith provided the final bit of euphoria, hitting a three run pinch hit walk-off blakata to end the season with a thrilling 7-6 victory. I’m glad I watched it live, because there was real emotion in Casa de Metstradamus after that one. You’re talking about two of the more cynical hearts in Mets-land raising their fists in the air and jumping up and down like it was a playoff game. If our hearts were warm only for a moment, it was a great moment.

It’s great because Smith is one of the most selfless ballplayers anyone could hope to meet. He comes up in ’17 as the heir apparent to the first base job. He goes from John Olerud-lite to a three true outcome guy in the last part of the season after playing a ton of games in the minor leagues. He tires out so they tell him to go and lose weight. He does that, dilligently. So what do the Mets do? Go sign Adrian Gonzalez, of course.

Then Smith gets hurt and has to learn a new position just to get some swings, and it predictably turns into a disaster. So 2019 is a new year, right? Yeah about that … there’s this guy named Alonso that’s going to be the new rage, and with all the outfielders somewhat healthy (besides the one that has his own ranch), nobody really knows what to do with poor Dominic Smith.

At any time during this ordeal, Smith and his representatives from Roc Nation could have gone to the Mets and said “look, this isn’t working out … we’d like Smith to get a fresh start elsewhere.” But to the best of everyone’s knowledge, that hasn’t happened. Smith became Robin to Alonso’s Batman, and produced off the bench as a pinch hitter/part time player, and did so with a team-first attitude that has been a positive in that Mets clubhouse. His karmic reward for that, of course, was getting hurt again and having to roll around in a scooter. But if we’ve learned anything from Smith we’ve learned this: When life throws you a scooter, put a license plate on it.

Injured Met Dominic Smith rolled onto the field tonight with a license plate on his scooter. pic.twitter.com/YF1RUxyKPu

If all of this led to Sunday’s home run, and that’s the highest point he reaches in a Mets uniform, or even in his career, then at least it’s higher than most of us could hope to achieve in a lifetime. But Smith deserves more than that, and where that lies might be in a zip code well outside of Flushing. What that is is something that the Mets can’t give him. As we in Casa de Metstradamus were professing our wish for Smith to stay, I knew deep in my heart that it may not be able to happen. Smith will most likely return to being measured in value in our minds instead of heart, at least for a few weeks during the winter meetings. Then, we’ll see. Maybe it’s destiny for Smith to be 2020’s Ed Charles or Kevin Mitchell and provide whatever the club needs. Maybe Smith and the Mets will continue to try to mine that value.

But I know that either Smith or the Mets will see things differently, and that’s all it takes. I’ll never begrudge Smith for wanting to play a larger role on a major league baseball team. And I can’t begrudge the Mets to try to use Smith to improve the club by bringing back other areas of need. If you love somebody, set them free, right? If Dominic Smith is set free, the legacy he leaves will be that of a good hitter, a selfless player, and a great teammate who got the great moment that he deserved. And he’ll leave us with a reminder that heart and soul still has a place in baseball.

That’s a hell of a legacy to leave.