How Will the Packers Offense Adjust Without Davante Adams? 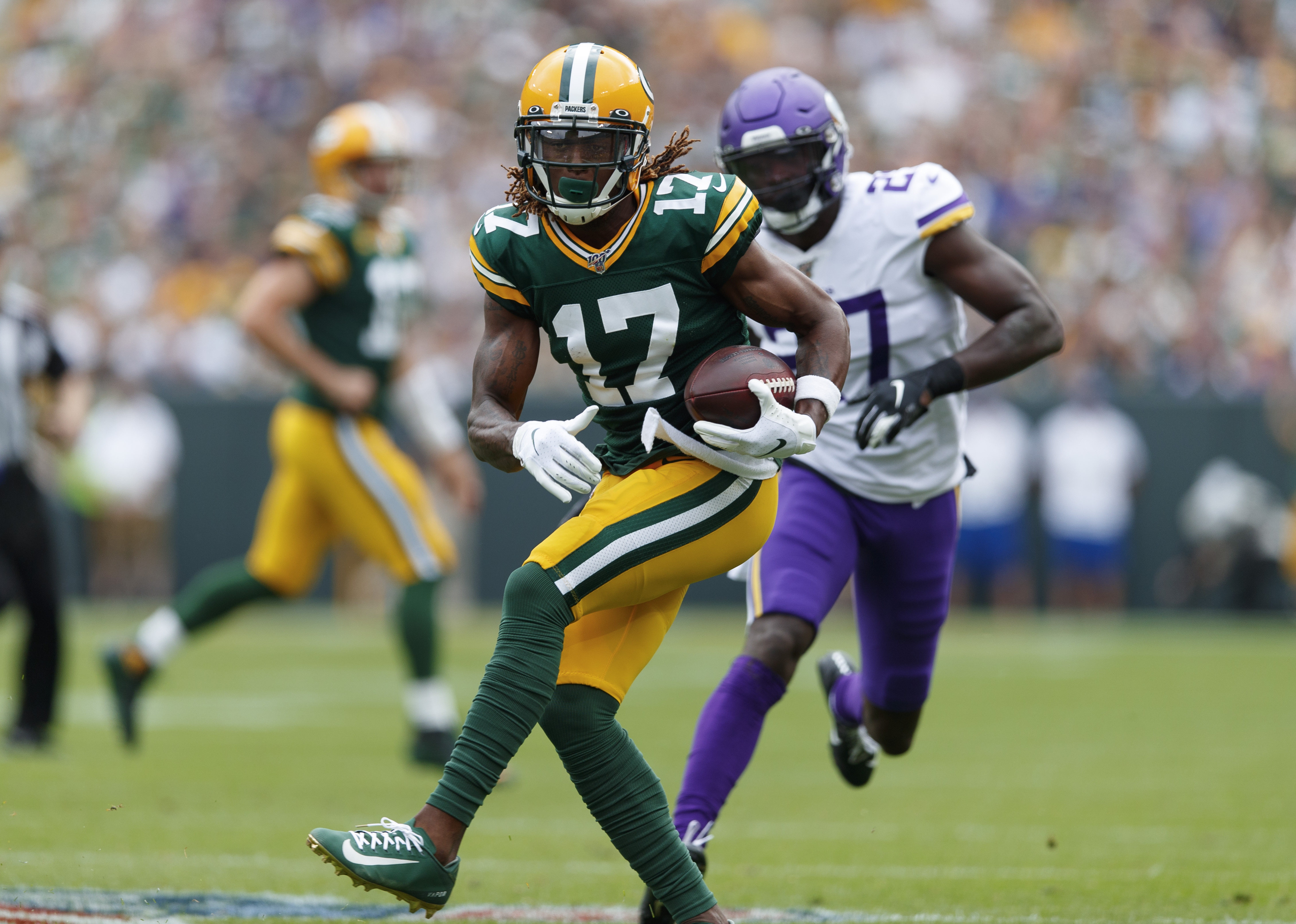 How Will the Packers Offense Adjust Without Davante Adams?

The Green Bay Packers suffered several key injuries in their 34-27 loss to the Philadelphia Eagles in Week 4, but none may be bigger than wide receiver Davante Adams who left the game in the second half with what he described as “turf toe.”

Although the injury was described as less serious than originally feared, the preliminary indication is that Adams will miss “some time,” which means he is unlikely to be available when the Packers take on the Cowboys in Dallas in Week 5.

So how can the Packers adjust their offense if they are forced to play without their best receiver? There are several options to look at but what’s obvious is that none of them are a sure thing.

1. Other Receivers Must Step Up

Depth at wide receiver has been an issue for the Packers throughout the season. Besides Adams, nobody has consistently gotten open for the Pack although several receivers have shown flashes.

Marquez Valdes-Scantling has shown the ability to get deep and has made several long catches for big gains. MVS has the second most receptions on the team with 16 for 217 yards and one score. But while he has excellent speed and size, Valdes-Scantling has not been consistently open this season. His receptions tend to come in bunches and then he is invisible for long stretches of games. Keep in mind this performance has come while defenses were geared to stop Adams primarily and MVS was not facing the opponents’ best corners. It is more likely he will face opponents’ top corners while Adams is out of the lineup.

Geronimo Allison has been a big disappointment so far this year. In 2018, he was off to a fast start before injuries ended his season. This year, Allison has just eight catches through four games for just 76 yards and two scores. The fourth-year Illinois product was a key factor on a few drives but has also been a non-factor for long stretches. The Pack needs a veteran like Allison to step up and perform now that he will have a larger role in the offense.

The Packers may ask for more from Jake Kumerow, if he’s healthy and available. Thus far this season, he has been limited by injuries and has appeared in just two of the first four games. He has only one catch for 12 yards. Kumerow runs reliable routes and has the confidence of Aaron Rodgers. His size makes him a good target in the red zone. But Kumerow is an undrafted free agent who has never produced consistently at the NFL level. He would need to step up his game to provide the Packers with more while Adams is out of the lineup.

The other receivers available are Darrius Shepherd and Allen Lazard. Lazard has great size while Shepherd is more of a speed guy. While both shined in the preseason against lesser competition, between them they have one regular season catch, that being Lazard’s which came last season.

2. Throw More to the Tight Ends

When Adams went down against Philadelphia, Rodgers started looking more to starting tight end Jimmy Graham. Graham. Graham finished the game with a season-high six catches for 61 yards and a touchdown. The former University of Miami star is clearly not the player he was in his prime and now has difficulty getting separation from even average defenders. There were two occasions against the Eagles that Graham had a chance to make a difficult catch that would have resulted in a key score or gain, and he failed to come down with the ball both times.

Graham has the size to be a factor in the red zone, but he has not lived up to expectations since signing with the Packers prior to last season. Rodgers has said he wanted to get Graham more targets even before Adams got hurt, and this will be his big chance to show he can still be productive.

Marcedes Lewis, Robert Tonyan and Evan Baylis are the other tight ends. Lewis is a sure-handed veteran who is primarily used as a blocker and check down option. Tonyan is a converted receiver with the most upside potential as a downfield target, but he has yet to prove he can get open consistently. Baylis had a strong preseason but has yet to catch a pass in his NFL career.

Expect Matt LaFleur to call more plays for his tight ends in Adams’ absence. They were a bigger part of his offense in Tennessee and will be again with WR1 out of the lineup.

3. Throw More to the Running Backs

The final option for the Packers is to throw the football more to their running backs. Aaron Jones had a season-best six catches on Thursday against Philadelphia. Jones has improved as a receiver and getting him the ball in space is always dangerous because of his speed.

Jamaal Williams is also a reliable receiver at running back for the Packers with eight catches this year for 55 yards and a touchdown. But Williams was injured early in the Eagles game and may not be available for the Pack.

Fullback Danny Vitale has three catches for 42 yards including a 27 yarder against Denver. Vitale can run well after the catch and could surprise defenders on a few plays.

Rookie RB Dexter Williams would be the next man up if Jamaal Williams is unable to play next Sunday. Williams was still learning the offense during preseason and may have limited value as a receiving target. He has not been active yet for a game this season.

While the Packers have several options if Adams is unable to go, look for the offense to spread the ball around more and ask other players to step up. Expect more throws to the tight ends and running backs while the Pack hopes another wide receiver can step up and get the job done. Adams’ absence will present LaFleur with a definite challenge this week against Dallas. It will be interesting to see how the rookie head coach and his team respond.