Is there such a thing as "Play Like an Eagle" ? 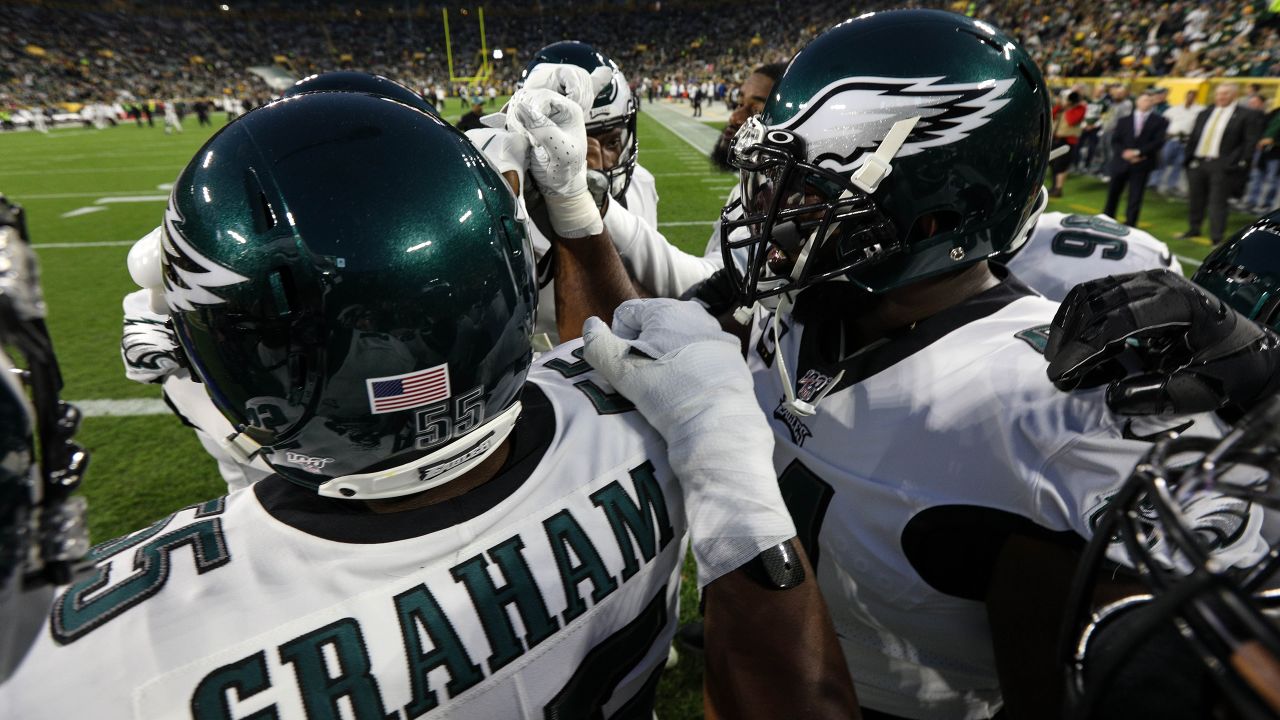 Is there such a thing as "Play Like an Eagle" ?

Just spit-balling here… Kinda celebrating a 2-2 record at the quarter mark, realizing how much worse things could be…

Can you imagine being a Cincinnati Bengals fan right now? 0-4 with no end in sight, really. How does that happen with such “proven” talent on the payroll?

There is an intangible element in the sport of full-contact football which keeps us as fans coming back for more. That would be a combination of “empathy” and “sympathy”. Call it “emsympathy” ?

It’s like this— most of you reading this have actually played the game at some level, or at least took part in impromptu gatherings of guys (and gals) who broke out the pigskin and agreed to pretend we’re the Kennedy’s.

So you quickly learned the physicality of the sport at its most basic level. And that level included two primal experiences: my opponent is allowed to run around me, and also over me.

At some eventual limit of pain tolerance and/or conditioning stress, you decided it was time to stop playing this sport you loved.

Nothing wrong with that.

But here is why you are hooked on the NFL— because somewhere deep in the the most valiant portions of your brain you are responding to the call to arms which every team in the NFL is sounding around about Week 5.

You are subconsciously wondering, could I in my prime have filled the void?

That’s the basis of why we identify so closely with our home team. We want to feel a part of a team effort, and we take it as a personal identification.

Maybe that’s the hook of all successful entertainment enterprises— they create the believable illusion that the spectator is involved in the success of the enterprise.

Anyway, “Play Like an Eagle” will need to be defined for some new additions. This roster is turning over faster than my 1998 Montgomery Ward Yardmaster ever could…

The Atlanta Falcons, in need of safety help, traded linebacker Duke Riley and a 2020 sixth-round draft pick to the Philadelphia Eagles for safety Johnathan Cyprien and a ’20 seventh-round draft pick, the teams announced Monday.

Cyprien, 29, had started 70 career games in six seasons, including four years as a starting strong safety in Jacksonville, where the Jaguars run a scheme similar to that of the Falcons. The 6-foot-1, 211-pound Cyprien is known more as an in-the-box safety but has been a liability in coverage. He has played only sporadically in the barest sense for the Eagles this season.

The Falcons lost their in-the-box safety when strong safety Keanu Neal suffered a season-ending left Achilles tear against Indianapolis. Neal had surgery last Thursday and is expected to make a full recovery. However, the 1-3 Falcons need another body capable of contributing immediately, particularly with tackling.

Coach Dan Quinn said after Neal’s injury he would explore all options at strong safety. The Falcons brought in veterans T.J. McDonald and George IIoka for workouts without signing either of them. Then the team elevated strong safety Jamal Carter from the practice squad.

In Sunday’s 24-10 loss to the Tennessee Titans, Quinn experimented with different looks, including playing nickelback Damontae Kazee at free safety some alongside Ricardo Allen, who moved from free safety to strong. The trade would indicate plans to utilize Cyprien in the defense, although Cyprien’s role with the Eagles had been limited to 15 total snaps. He was thrust into action last week against Green Bay due to injury. Cyprien also played special teams for the Eagles.

Cyprien played some linebacker with the Jaguars and started 10 games with the Titans at strong safety in 2017. Cyprien tore his ACL before the 2018 season while with the Titans.

As for Riley, the former 2017 third-round draft pick out of LSU could not carve out a role on defense after starting 10 games in 2018. He appeared to be on the roster bubble coming into this season but made a few plays in preseason to impress the coaches. But Riley had to settle for a special-teams role.

So now you’ve got this guy Duke Riley. Age 25, 6-1, 235…4.6 40-yard dash… He was once ranked the seventh best outside linebacker by NFLDraftScout.com. He’s since drifted into a “got great potential but…” haze. This is a guy who started the 2018 season alongside De’Vondre Campbell and middle linebacker Deion Jones. In Week 3, he collected a season-high 13 combined tackles (nine solo) during a 43-37 loss against the New Orleans Saints. The Falcons eventually restricted his playing time for some performance-related analytics. Hey, it’s a tough league…

But now the Eagles decided they need him for emergency depth and special teams. They see some “Play Like an Eagle” in him for various reasons (relative youth, affordability, maybe remembering the tackle he made against them in the NFC Divisional Round last year). This is how pro scouts make their money.

To me “Play Like an Eagle” should mean never give up on a play, even when it looks like you’re stupid to do so. It also means keeping your mind open to making a big play which could turn a game around. Despite all adversity, you live for the chance to make a positive difference in outcome.

What makes the trade for Riley more remarkable is he is one of the first NFL clients of Lil Wayne’s sports rep agency, “Young Money APAA Sports”.

Riley’s affiliation with Lil Wayne gives him instant credibility with many of the Eagles’ players who are into the rap/contemporary artist scene. Me, I’m totally ignorant of the Lil Wayne music catalog, but I see his getting commercial exposure on the major sports networks, so I assume his sports agency is actually a thing.

Here’s Lil Wayne’s pitch to NFL players: “He wants to give back to players. He wants to help them when football is over. At the end of the day, we can all identify with this. Lil Wayne doesn’t need this money, this sports money. It isn’t for that. He’s doing it for a bigger purpose, and players love that. They love working with people every day that walk with the same purpose, and that’s superpowerful.”

Maybe Atlanta had difficulty dealing with that Lil Wayne part of Duke Riley. That won’t be a problem in Philly.

Giving your clout toward a bigger purpose is what Lil Wayne is preaching, and on the surface it certainly resonates with Playing Like an Eagle.