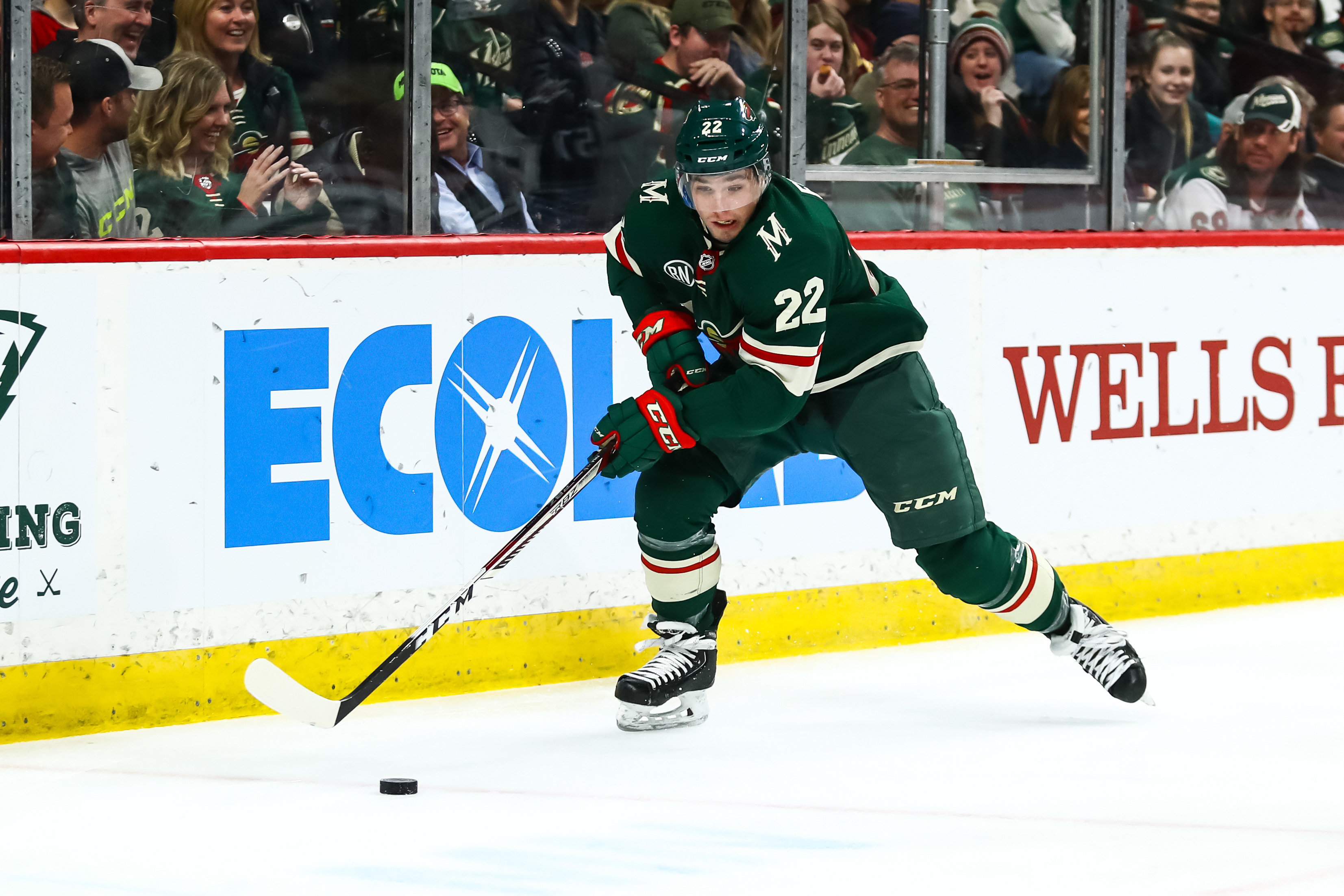 After an eventful off season the Minnesota Wild are finally ready to start the 2019-20 NHL season with a new General Manager in Bill Guerin and some new faces in its lineup hoping to prove last year’s playoff miss was an aberration.  Most fans and experts are pretty skeptical the Wild are going to rebound and in the weeks prior to the opening of NHL training camp, Minnesota Head Coach Bruce Boudreau was selling the ‘Us against the world’ mentality pretty hard whenever he had a chance to share his thoughts.  Of course its up to the Wild to prove him right and just about everyone else wrong.

With 6 of their first 7 games on the road including tonight’s game against Nashville the team will get a real good test of their character right out of the gate.  If 2018-19 season indicated anything was the Wild played their best hockey away from St. Paul so perhaps this road heavy schedule is a blessing in disguise so the team gets focused on hockey right away.  Nashville and Minnesota always seem to have spirited games, can the Wild start the season with a victory against a division rival on the road?

1st Period Thoughts:  The Wild looked a bit slow out of the gate.  The first shift with Eric Staal centering the top line along side Zach Parise and Mats Zuccarello looked a bit discombobulated as well as a bit long in the tooth.  Staal would fall to the ice and then slowly get up and not exactly hustle back into the Wild zone.  Minnesota’s best early shift came from the 4th line as Joel Eriksson Ek, Marcus Foligno and Ryan Hartman worked the cycle down low.  Hartman made his presence felt with a big hit on Rocco Grimaldi right near the Predators’ bench.  Unfortunately the top line would follow it up with another lethargic shift and Zuccarello would get caught hooking, forcing Devan Dubnyk to bail them out with a tremendous save on Matt Duchene.  On the power play the Predators moved the puck around the ice fairly well, but Nashville settled for shots from the perimeter which missed high and wide.  But the Wild would take another penalty just seconds after killing off Zuccarello’s penalty as Nick Seeler held up Mikael Granlund.  The Predators would appear to strike on the man advantage as a puck popped up into the air and it was batted out of mid air by Granlund and off Nick Bonino‘s visor and in.  In a strange sequence the goal was waived off, then later deemed to be a good goal.  Minnesota’s bench challenged the play and upon review it was ruled a high stick and the Wild would escape with a ‘no goal’ call.  With the sellout crowd at Nashville now annoyed with the officials the Wild penalty kill went back to work.  Minnesota would get the kill and would try to go to work to generate at least a shot on goal.  Jared Spurgeon joined the rush and he’d let go of a shot that was an easy save for Pekka Rinne.  The Wild would then get its first power play of the game.  Minnesota struggled to get established in the offensive zone.  After a minute of poorly devised zone entries they’d finally get set up and they’d waste little time getting the puck to Matt Dumba who unleashed a heavy shot that drew a big rebound from Rinne that the Wild couldn’t take advantage of.  The Wild would come up empty on the man advantage.  The last few minutes of the period were Minnesota’s best as Zuccarello did a great job of distributing the puck as Spurgeon let go of a one-timer that Rinne struggled to stop and Parise nearly cashed in on the rebound.  Minnesota kept swarming a bit in the offensive end as Jonas Brodin ripped a shot on goal for a glove save by Rinne.  The Predators tried to answer back with a chance of their own as Ryan Johansen swung a shot on goal that was stopped by the toe save of Devan Dubnyk.  Ryan Donato would take one last Wild shot in the closing seconds of the period that made for an easy save by Rinne.  Minnesota probably had to feel pretty good to be going into the intermission still knotted at 0-0.  It was a rough period for Eric Staal who looked slow and tired just as he did most of last season.  The Wild were out shot 15-6 in the period.

2nd Period Thoughts:  The Predators started out on the attack and Dubnyk had to make an outstanding glove save to deny Granlund after a pretty saucer pass by Duchene.  Nashville kept the Wild hemmed in their own end as Dubnyk had to make a few stops to bail out his team.  Unfortunately the pressure continued and the Predators as they broke the stalemate as a puck went off Ryan Ellis‘ skate and bounced in.  1-0 Nashville.  With the ‘You Suck’ chant in full effect the Wild tried to answer back but struggled to generate many shots on goal.  Jason Zucker had a great chance with Rinne sprawling in his crease but his shot would go up and over the goal.  A minute later the Wild again were swarming in the Predators zone, but at the critical moment when Zuccarello appeared to be set up for a shot from the slot the puck wound bounce over his stick.  The Wild were having to work so hard just to generate a shot from the perimeter.  Minnesota would get a bit of a gift from the predators as Craig Smith tripped up Dubnyk while skating near the Wild crease for a goaltender interference penalty.  The Wild did nothing with the power play as they continued to struggle with their zone entries and were forced to dump it in which made for easy turnovers for the Predators to clear the offensive zone.  After the failed power play the Predators would go on the attack in search of the insurance goal.  The Wild spent the next few minutes chasing the Predators in their own zone.  Minnesota could barely touch a puck as Nashville appeared to be a step or two faster to nearly every loose biscuit.  The Wild would get another power play late in the period and they’d take advantage of it.  Brad Hunt would unleash a one-timer that deflected off Mattias Ekholm‘s stick and then off Zucker’s shoulder and in.  1-1 game.  Then just 43 seconds later the Wild, who had killed the rambunctious crowd with Zucker’s goal struck again as Dumba blasted a one-timer by Rinne.  2-1 Wild.  With the crowd stunned at Minnesota’s goals the Wild seemed content to work pucks deep and try to keep their lead going into the 2nd intermission.  It was a bit chaotic in the closing seconds of the period but Minnesota was able to block away shots from reaching Dubnyk and take their 1-goal lead into the break.

3rd Period Thoughts:  The Predators wasted little time in tying the game as they raced into the Wild zone before Roman Josi stepped into a slap shot that Granlund appeared to get a piece off as it trickled through Dubnyk’s pads.  2-2 game less than a minute into the 3rd.  Nashville could sense blood in the water and they raised their pace of play and the Wild couldn’t keep up and they’d strike again a little over a minute later as Austin Watson ripped a shot by Dubnyk.  3-2 Nashville and the sellout crowd was fully awake from its 2nd period slumber.  The Wild would try to press for the equalizer but time and space were tough to come by in the Nashville end and they had a few plays that just failed to connect.  Kevin Fiala would find Zucker on a long pass for a breakaway but his wrist shot was denied by Rinne.  Moments after that, Suter set up Zucker all alone into the slot and he’d try to beat Rinne with a backhander only to have it nabbed out of the air by the Predator goalie’s glove which drew an ovation from the home crowd.  Nashville would add to leads lead a few minutes later as Johansen swung a shot on goal that drew a big rebound from Dubnyk and that was pounced on by Viktor Arvidsson who ripped it by the Wild goalie.  4-2 Nashville.  The Wild didn’t appear to have the energy or the speed to really rally for some kind of comeback push.  The Predators were content to wait and sit back in a 1-2-2 trap and force Minnesota to dump it into the offensive zone for an easy turnover.  Nashville was more than happy to slow it down, kill time while the Wild, tired and unmotivated just sort of watched the Predators handle the puck.  Jordan Greenway tried to use his big frame to work a power move down near the Nashville goal but Rinne was there to make the stop.  The Wild would pull Dubnyk for an extra attacker but no one seemed to have the energy to really go on the attack and Filip Forsberg buried an empty netter to seal a 5-2 victory.

C – Damien Giroux (Saginaw, OHL) ~ The Hanmer, Ontario native had a big night for the Spirit on Thursday with a goal and two helpers in earning him 3rd star honors in the process in Saginaw’s 5-4 win over Niagara.  He has 5 goals, 8 points, -3 in 6 games.

RW – Shawn Boudrias (Cape Breton, QMJHL) ~ the rugged power forward earned 2nd star honors as he had two goals in the Screaming Eagles’ 8-3 rout of Saint John on Sunday.  Boudrias has 3 goals, 4 points, 7 PIM’s and is a +2 in 3 games.

C – Alexander Khovanov (Moncton, QMJHL) ~ the skilled Russian buried his own rebound but it wasn’t enough for the Wildcats as they fell 5-3 to Charlottetown.  He also had 7 PIM’s in the loss.  Khovanov has 3 goals, 5 points, 7 PIM’s and is a +4 in 2 games.

LW – Kirill Kaprizov (CSKA Moscow, KHL) ~ the skilled winger is off to a torrid pace and that continued on Tuesday as he tallied a natural hat trick in CSKA’s 9-3 trouncing of Spartak Moscow.  Kaprizov has 9 goals, 16 points, 2 PIM’s and is a +8 in 11 games.