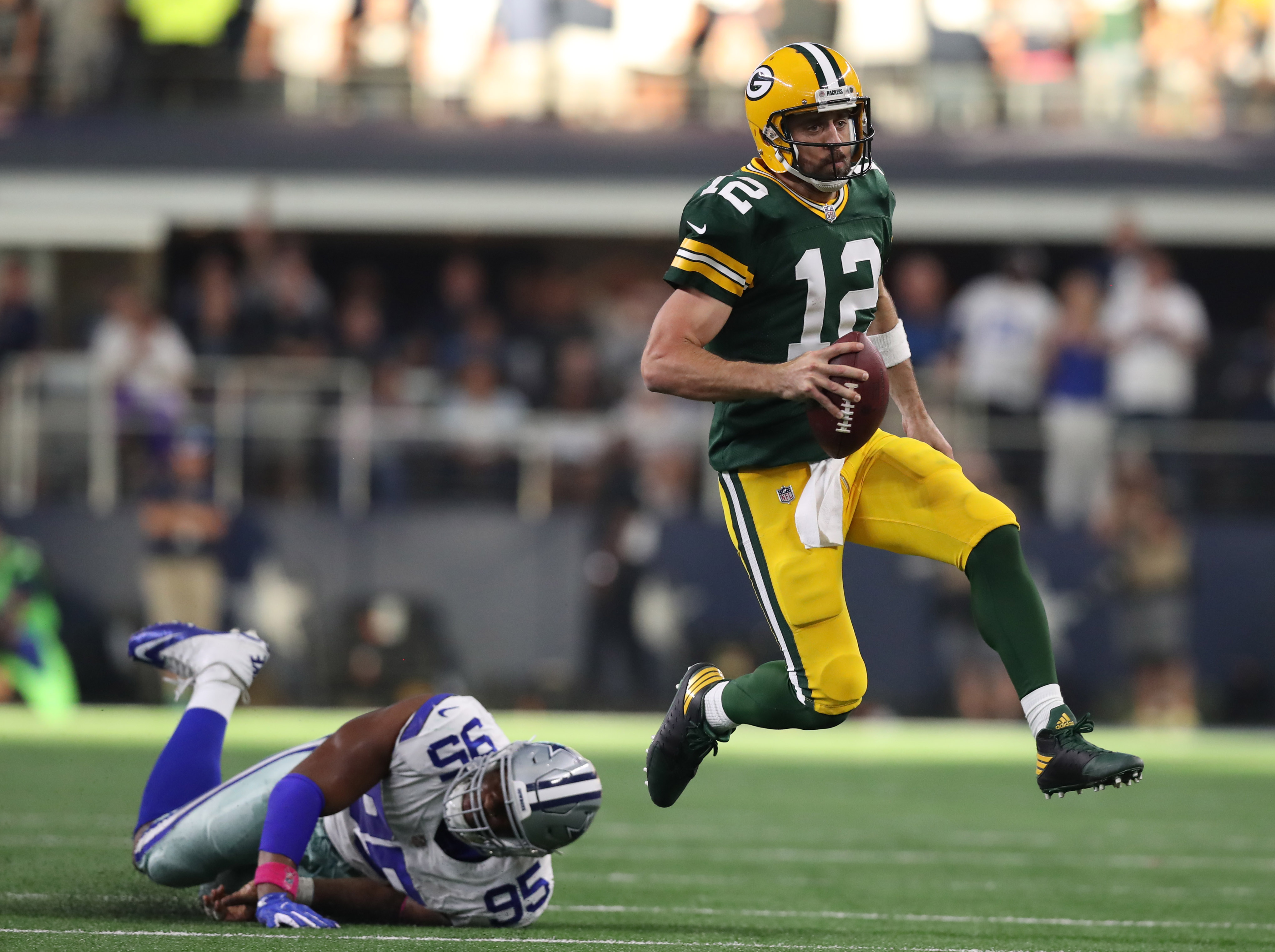 One thing is certain when looking at Aaron Rodgers’ career: he loves playing in Dallas. Since taking over as the starting quarterback of the Green Bay Packers in 2008, Rodgers has played three games in Dallas and won all three. Two of those games came against the Cowboys and the other was Super Bowl XLV which saw the Packers beat the Steelers for their last Super Bowl title. Not only is Rodgers unbeaten in Dallas, but he’s come through with clutch finishes in each of the three games to give the Packers dramatic victories.

Here is a look back at how Rodgers has fared in “Big D” thus far in his career:

Rodgers put on an MVP performance to lead the Packers to their 13th world championship and fourth Super Bowl win. Rodgers finished the game 24-of-39 for 304 yards and three touchdowns without throwing an interception.

The Packers took a 7-0 lead in the first quarter on a 29-yard touchdown pass from Rodgers to Jordy Nelson. In the second quarter, A-Rod found Greg Jennings on a 21-yard touchdown toss to give the Pack a commanding 21-3 lead. Rodgers’ final score came in the fourth quarter when he found Jennings on an eight-yard score to make it 28-17 Packers.

Rodgers came through in the clutch late in the game. With the Packers secondary banged up and their lead down to three points, Rodgers found Jennings again on a 31-yard pass on third down that set up Mason Crosby’s field goal with 2:07 remaining that gave the Packers their final margin of victory.

Rodgers led the Packers to an early 21-3 lead but after the Cowboys came back to tie the game 28-28, the Packers quarterback had to come through twice in the final two minutes to earn the upset win.

The famous play was 36-yard pass to tight end Jared Cook who got both feet in bounds to set up a 51-yard Crosby field goal as time expired for the win. Rodgers scrambled away from pressure and threw against his body to find Cook near the sidelines on a third-and-20 situation.

Earlier, Crosby nailed a 56-yard field goal that put the Packers ahead 31-28 but Dak Prescott led the Cowboys downfield for the tying field goal with just over a minute left on the clock.

Rodgers finished the game 28-of-43 for 356 yards and two touchdowns. He also threw one interception.

The win was Green Bay’s eighth in a row and sent the Packers to the NFC Championship Game against the Falcons.

Rodgers put on another show in Dallas to improve the Packers record to 4-1 on the season with a 35-31 win over the Cowboys. Green Bay’s franchise quarterback found Davante Adams on a 12-yard touchdown pass with just 11 seconds left in the game to lead the Pack to victory.

Rodgers finished the game 19-of-29 for 221 yards and three touchdowns, two to Adams and one to Jordy Nelson.

It was a back and forth game between these two rivals. Dallas led 21-6 in the second quarter before Rodgers rallied the Packers back. A touchdown toss to Nelson early in the fourth quarter put the Packers ahead 22-21 but a Cowboys field goal gave Dallas back the lead. Then, Damarious Randall scored on a 21-yard pick six to put the Packers back ahead 28-24.

After Dak Prescott put Dallas ahead 31-28 when he scored on an 11-yard run with 1:13 remaining in the fourth quarter. But Rodgers came back and led the Packers on a nine-play, 75-yard drive that took just 1:02 seconds.

The Packers ran the same pass pattern to Adams on the previous play but could not connect. But Adams asked Rodgers to run it again and it worked perfectly for the winning score.

Overall, Rodgers is 3-0 in Dallas. He has completed 71-of-111 passes (64 percent) for 881 yards and eight touchdowns with just one interception. Both of his wins over the Cowboys involved late game heroics while his Super Bowl win also involved clutch play late in the game.

Rodgers is looking forward to his fourth start in Dallas in the House that Jerry Jones Built.  Packers fans are hoping he can show more of his Dallas magic on Sunday.