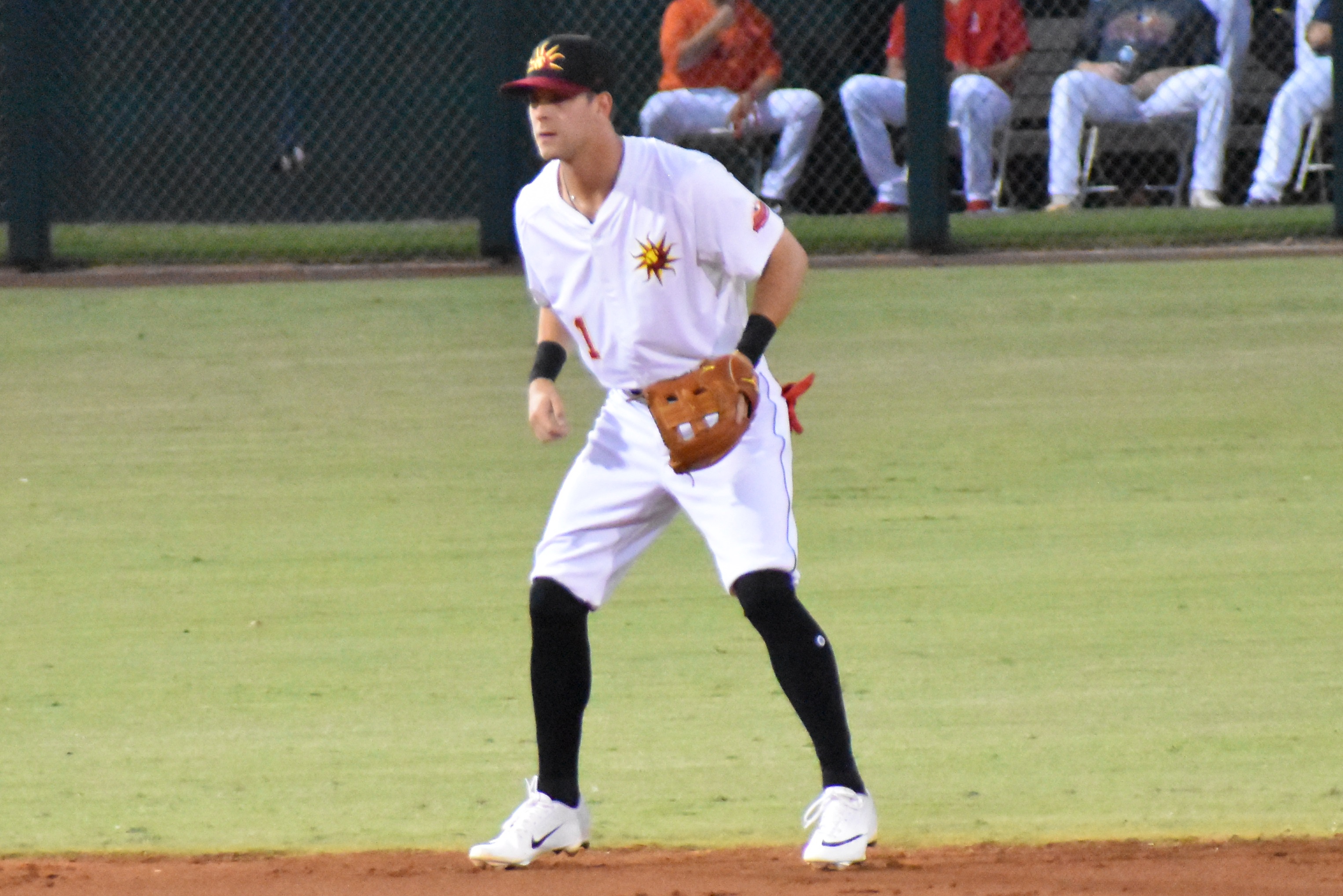 Ernie Clement certainly isn’t the Indians top rated short stop (that’s probably Tyler Freeman) or even the top infielder representing Cleveland with the Solar Sox in the 2019 Arizona Fall League (Nolan Jones), but he is remarkably consistent and a great athlete.

He has moved through the Indians farm system extremely quickly since being drafted in the fourth round in 2017 out of Virginia. Clement played a full season in Mahoning Valley that year, then played 102 games across three levels in 2018, ending up in Akron. This year, he surpassed the 100 game mark in the regular season, ending his year in Columbus and extending the season with the International League play-offs and the AAA championship game.

This made him a late show to the Fall League, but he made the most of his time in the post-season before heading to the post-post-season. After going 6 for 11 with a double, steal and two walks in the last three regular season games with the Clippers he had five hits and a walk in the four games against Gwinnett in the first round of the play-offs, three more in three games against Durham, then another single in the championship game against Sacramento.

Clement is an aggressive hitter with good speed and his high contact, line drive approach at the plate leads to a ton of hits. This makes up for his lack of walks somewhat while the speed makes up for the lack of power. In his three year MiLB career, he has 41 steals and 51 doubles in 248 games, but just three home runs and six triples. In his three year college career he had just four home runs and his rate stats were similar to his production in pro ball.

Now in the Fall League to continue his season for another month, Clement has maintained that consistency despite the fact that he isn’t getting consistent at bats. With three other short stops on the squad (Isaac Paredes, Nick Allen and Zach Short), it is hard for anyone to get consistent playing time. In this particular situation, the Tigers’ Paredes is essentially the starter, pushing Clement to second from time to time. Through October 3rd, he has a .357 OBP with five strike outs in 24 at bats.

While he has played over 100 games in each of the last two seasons, learning to play in a bench role could be the best outcome for Clement. As mentioned in the first sentence, he isn’t the Indians top short stop by a long shot and there appears to be a direct line of succession from Francisco Lindor (through 2020) to Freeman with plenty of others to follow (Brayan Rocchio, Gabriel Rodriguez, Angel Martinez and on and on). With such a deep depth chart at the position, Clement’s path to the Majors will likely be in a utility role rather than as a starter.

Many players use the Fall League to learn a new position (Yu Chang played a lot of third and second last year and Francisco Mejia tried out third here) and, while Clement has already played second and short, learning to play off the bench could be considered a new role for the normal starter.

In this age of strike out records being shattered, someone like Clement is a rare find. We also have a somewhat close comparison statistically to Clement who has already had some MLB experience in Tony Kemp. The Cubs (formerly Astros) outfielder had very similar numbers to Clement in the minors with a bit more power and has seen his K rate increase in the big leagues, but has still kept it below 20% each season. Kemp has had some BABIP struggles this year, but worth more than one win offensively last year in 97 games.

At the moment, I would peg that as Clement’s offensive ceiling, but the bonus is his defense. While it’s a much smaller sample size than his time at short, he has not committed an error in 22 games at second base and has a .951 fielding percent in nearly 1,800 innings at short stop. While that fielding percent isn’t great, almost half of his errors (22 of 45) were committed in  2019 in Akron, significantly marring the number. While we can’t discount this, because it did happen, he was perfect in his short time in Columbus and has looked good in Arizona.

Already a competent defender at two positions, there could be a bonus should Clement move into a utility role. In college, he almost exclusively played outfield although the Indians have never tried him there. If he were to get back into the outfield, I could see Clement becoming a favorite of Terry Francona in Cleveland. He has traditional splits, hitting .315/.373/.387 against lefties and .252/.303/.310 against fellow righties. Even just as an infielder, he could be a platoon option against lefties, but if he could make the jump to super utility man, he could probably get regular at bats in the big leagues.

Clement was likely slated to start 2020 in Columbus even without the AFL experience, but now that he is getting in an extra month of playing time against some of the best players minor league baseball has to offer, he is dramatically increasing his chances of a mid-season call-up to the big leagues. Mike Freeman is currently maintaining the role of utility infielder and is under team control through 2024 with Yu Chang also expected to have some place on the 2020 squad, but there could still be room for Clement. With the Indians likely losing Jason Kipnis, there could certainly be some turmoil in the infield next year and Clement should be prepared to step in.