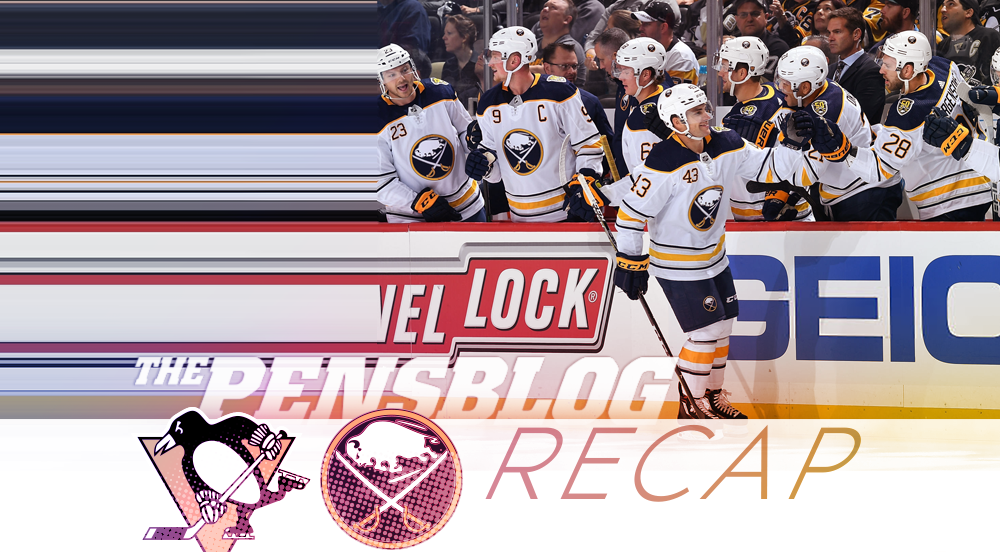 The Penguins opened up their season last night following an early exit from the playoffs that was built around defensive breakdowns and a lack of offensive drive. In this world where we get upset over every little change boy do I have good news for you.

Jeff Jimerson gave you those uncomfortably tingles down there again as he rocked the house to kick off his 29th season. I made a snide remark about how the Pens would win the cup after Conor Sheary didn’t score on his first shot of the game, that would be the last shot he didn’t score on. Five minutes in the Pens were getting outshot 9-2 and with the exception of the Malkin line you would be hardpressed to convince me anyone else with a black jersey was actually playing. Just 5:23 into the game the Pens had trouble clearing the defensive zone, two players collided along the boards, and Conor Sheary reminded everyone that he can score occasionally.

Not an ideal positioning for Murray as he stayed glued to his goal line instead of challenging, but I suspect that has to do with years of Sheary being a little shit at practice trying to go short-side. Instead of doing this he pulled a Roethlisberger on Twitter and went high blocker, 1-0 Sabres.

Conventional wisdom would tell you the Penguins woke up at this point but this is the real world snowflake. The Sabres continued pouring on pressure and by the 10-minute TV timeout the shots were 14-3 Buffalo, and Murray was forced to stand tall on a Girgensons break-away prior to the commercial.

Following the break, the fourth line of Simon-Blueger-ZAR showed some life and actually got a shot on goal which put a little step in the Pens game. They drew their first powerplay opportunity and had a golden chance to tie it. The powerplay looked really impressive, aided by a Buffalo player losing his stick early, but the first unit just couldn’t get it done. As time clicked away the Pens gave up the obligatory short-handed breakaway to Girgensons, but Matt Murray had no time for that.

matt murray has had a really good first period pic.twitter.com/uF3XqnfaER

The period would slowly fade away, with the second line of Gachenyuk-Malkin-Tanev getting one final look on net before the buzzer.

it's just one period but this galchenyuk-malkin-tanev line might actually have something going pic.twitter.com/h93E7I1tL1

I was interested before the game started to see the defensive TOI usage as I had a sneaky feeling Johnson on the second pairing would not equal to second pairing minutes. After one period the TOI was Leang 8:12, Pettersson 7:06, Schultz 6:20, Dumoulin 6:05, Gudbranson 5:43, Johnson 5:16. In my opinion, other than Dumo being low this is near perfection.

The second frame opened up with the first memorable showing from the first line all night. A few minutes later Dominik Kahun stole a puck marking the first time you’ve noticed him since he got to Pittsburgh. Kahun went down 2 on 1 with McCann and waited until he was five feet from the net to force an unsuccessful pass across the crease so yeah, he was born to be a Penguin. The Pens kept churning and eventually drew their second powerplay of the game. Working along the perimeter Crosby went up the boards to Letang, Letang across the blueline to Geno, Geno right down Hutton’s throat.

malkin ties it up through a delightful little screen from hornqvist pic.twitter.com/om3grHBPX9

I’m really not sure why Sullivan even attempted practicing with a powerplay unit that didn’t have Hornqvist on it. Malkin was sharp the entire game before this and was looking shot-first in the offensive zone the whole night. I’m not going to complain about that mentality from him.

The Penguins continued to build off their momentum and your heart started to shake off the cobwebs until Marcus Pettersson high-sticked some slut and the Pens went shorthanded. The newly rebuilt PK took the ice for the first time with Blueger-ZAR in front of Letang-Dumo, the second unit was Bjugstad-Tanev with Johnson-Gudbranson. One note with this setup, that is a lot of height on the Penguins second group between Bjugstad, Johnson and Gudbranson that Murray will have to battle through. The units got the job done though and we went back to even strength hockey for five seconds before Brian Dumoulin had to take a seat for holding Jack Eichel. Asking any team to kill off back-to-back penalties is a lot, asking a group with a bunch of first-time penalty killers on it is suicide. All hell broke loose once but Murray was able to keep the puck out, all hell broke loose twice and it was 2-1 Sabres after a nifty bounce from Mittelstadt to Sheary.

conor sheary only scores against the penguins i dont know if you have heard this before pic.twitter.com/2tLza7CkCn

The goal sucked whatever life was in the Pens out and it became the Sabres show. Buffalo started using a stretch pass to split the Penguins defenders and they were only successful with this play 1839 times as they got unlimited odd-man rushes against Murray. The Penguins coaching staff had a full summer to adjust the D, but I feel they spent it playing with their own instead.

Murray was doing all he could to keep this a one-goal game but with one minute left Brian Dumoulin made a pinch along the boards that tied up four players in one spot. Rasmus Dahlin took advantage of this and jumped up on the play to create a 2 on 1.5 with Sam Reinhart against Letang and one limb from Teddy Blueger. Reinhart gained the zone and wanted no part of Letang as he fed Dahlin, who took it to the house.

teddy gets caught flat footed covering in behind for dumoulin's pinch and just gets smoked by dahlin pic.twitter.com/uFwiqLYD11

The Boss Man G with the call on Blueger, here is what he is talking about:

As Dumoulin gets the puck along the wall Blueger (at the blueline) has filled in for Dumo position-wise. This is a perfect start, but his indecision on where to stand kills him. When you look below you’ll notice that had Blueger stayed where he was the following play wouldn’t develop, however, he backs directly into no man’s lands.

As the puck comes out Blueger is flat-footed and already outmanned, this is a dead zone to be in for Teddy, 10 feet closer to Dumoulin (his original position) and he gets this loose puck, 10 feet further back and he is in great defensive position. There is no in-between those two spots, however, and Teddy is in the in-between.

Possession won by the Sabres and with a quick touch to center Blueger has effectively taken himself out of the play.

The Sabres would get a look on goal 10 seconds later when Kyle Okposo had an uncontested shot from 8 feet away that he sent into orbit. The period would conclude 3-1 Sabres.

The mindset heading into the third was to just win a period and have something to build on moving forward. This was my mindset however, as the Penguins were content with getting exploited like a crooked politician and odd-man rushed more frequently than Stormy Daniels. Kyle Okposo had a forty-foot breakaway three minutes in but Murray again didn’t have to move as Okposo showed off why he makes 6 million a year as he put another one directly into the protective netting. If you put the following two gifs on repeat for twenty minutes you have watched the entire third period:

beginning to think that this combination of a bottom 4 on d might not be the best (2/2) pic.twitter.com/yQw3KCFPbN

The only good to come from these breakdowns was Matt Murray. The Pens were given a golden opportunity early with a powerplay chance but they looked like they lost their Kessel I mean quarterback. After that failed attempt Brandon Tanev put in some nice work to draw another powerplay. On this chance, it took over 75 seconds to gain the zone, which is a bold strategy. At the conclusion of that powerplay, there were 9 minutes left, which slowly dwindled down to a few seconds before the Pens gave it the ‘ole Dan Bylsma era try (mass panic at the end to make you say “they tried so hard” while forgetting the previous 59 minutes).

It wasn’t meant to be though.

-Tough to get mad at a guy that puts up a .927 save percentage facing 41 shots

-All preseason long the Pens used Guentzel-Crosby-Kahun and McCann-Bjugstad-Hornqvist, only to change them once Rust went down. For the most part, those six players were obsolete. The Pens have 11 new players in the lineup compared to last year’s opening night starting roster, it will probably take some time.

-Seth Rorabaugh said it best, in many ways this looked like game 5 against the Islanders

-Not going to win many games when your offense looks like this:

Penguins didn't get close to the Sabres net much and when they did they mostly missed the net.