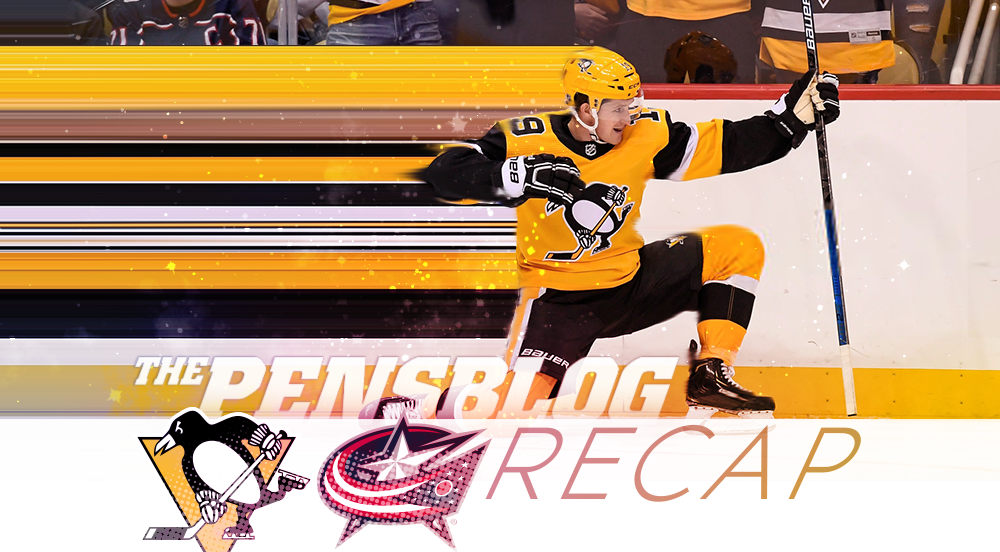 The Penguins had the rather easy chance of following up their season opener with a better outing in game two. Game two took place in Pittsburgh Saturday night, and the Penguins came to play. I am typing this up late Saturday night, it might actually be Sunday by now, and I am four bloody Mary’s and a few beers in but don’t let that sway your opinion on my brilliance. Before jumping into the cap I want to take a second and say happy birthday to the true great one, Mr. Mario Lemieux. Had Mario Lemieux not been born I may not have been a hockey fan, but more importantly, the world would be a worse place had we never experienced his generosity and philanthropy. Happy Birthday 66, and here’s to many more to come.

The game started, but I was getting a drink and missed the first two minutes. I almost restarted it but it was 0-0 and the second game of the year. The Pens got an early powerplay about the time my ass hit the couch and apparently I should’ve just stayed in the kitchen making drinks because that powerplay was as exciting as clipping your toenails.

The rest of the period was just as exciting and finished 0-0 with not a lot to talk about.

Stats through the 1st period of play ⬇️ pic.twitter.com/NwgdLDKqV2

After a first that put you to sleep coupled with Thursday nights opener that showed three signs of life out of this team we were all thinking “what would the second bring?” It would bring the Pittsburgh Penguins. Not even two minutes into the frame the internet basically crashed when Jack Johnson fired a puck into the net. You didn’t read that wrong, we legit had a Jack Johnson goal. Then after review, Patric Hornqvist joined the list of people who have stolen from Johnson.

Work it from low to high to the goal. Such an easy movement pattern that is successful because it keeps the defense moving around and clears traffic. This is a great first touch by Johnson, who had his head up and knew where he was going before the puck got to him. Just a simple one-time wrister but effectively done and right to the Horn Dog, you can’t help falling in love with this deflection.

Unlike Thursday night the Penguins didn’t quit following the goal and they actually looked like a hockey team. Less than three minutes after the goal the first line was working the puck down low when Sidney Crosby took over and released how to train your dragon IV

Most likely not a goal on most nights, but in his first start Merzlikins was all shook up and couldn’t get a clean glove on it. This is a great heads up play by Crosby, nothing new there, to wait for Pettersson to get open. Also shoutout to good boy Dom Simon sitting wide open on the doorstep too.

The Pens were clicking but we just can’t have nice things as the team got a little sloppy in their own end, and even Ohioans can clean up a mess once in a blue moon.

2-1 Pens, whatever. The Penguins made their baby bitches feel important for two minutes before Jared McCann regained the two-goal lead after deciding to take it to the hole on a 2 on 1.

CAN HE SCORE IT?
YES, HE MCCANN! pic.twitter.com/f4zqNYQ4G0

Now I may have been intoxicated when this happened, but did a Pittsburgh Penguin just opt to shoot instead of pass on a 2 on 1? What world is this? Nice knowing you McCann, you’re going to be traded for sure. Don’t be cruel Jared, this was some great patience by McCann who outwaits the defender’s move before taking the shot.

Fun fact: With his third point of the night, @jaredmccann19 ties a career high (2G-1A). It’s the second time in his career he has recorded three points in a game. pic.twitter.com/JVODJD1jQL

I would like to make a reservation for the state of Ohio at the heartbreak hotel please. Jesus Jared if you keep shooting from that far away they are going to trade you before the third period. Act like a Penguin you nerd. This is a nice play and great pass by Galchenyuk for his first point as a Penguin. He cooly gains the zone and then tosses a no-looker backhander with some sauce on it right to McCann. More impressively to me is how instead of driving straight through the blueline he angles so that he pulls the defenders away from the center of the zone allowing more room for McCann to slide into those DMs.

McCann was centering Galchenyuk and Tanev after Malkin left the game following this: https://twitter.com/A_Kalnins/status/1180637299966648320?s=20 I’ve slowed it down and looked at it, as he hits the boards his left leg flops like a left noodle but it could be anything. Malkin would not return to the game.

The Pens just kept dominating following the second McCann goal and would eventually get a powerplay as the Blue Jackets took a two-minute minor for sucking. The powerplay has had its struggles getting set up in the zone, but once there they have converted in each of the first two games. That is to say, they converted on this opportunity, which means I may have spoiled the surprise? Whatever, suck it Letang haters.

How about those five goals in the 2nd period? pic.twitter.com/I51AEhe2qH

Galchenyuk, known for his goal-scoring plays the role of a devil in disguise by again showing off his hands again with the assist on this one, another sweet feed even if there was a swing and a miss in the process.

With two-seconds reaming in the frame following the goal the Blue Jackets miraculously didn’t allow another one.

(unless you're a Blue Jackets fan) pic.twitter.com/bmv4jHorjR

The third period opened up with a 5-1 score. John Tortarella has a reputation around the league as being a hard-nosed coach, expecting a lot from his players, an old-school no-excuses kind of guy. He comes from the hockey brethren that would rather see 40 blocks and a 2-1 game than 40 goals and 2 blocks. Elvis Merzlikins, the Columbus goalie, was playing in his first NHL game of his career. Starting your career off against Sidney Crosby is damning enough. After 40 minutes his save percentage was 0.791 after allowing 5 goals on 24 shots. In my opinion, there is no way in hell this kid should’ve been left out there for the third period. It doesn’t matter if they played the night before, Torts used to use Bobrovsky 70 games a year. Horrible player development, I will step off the soapbox now. As the team took the ice for the start of the third there was no Evgeni Malkin or Nick Bjugstad on the bench.

This is fine . dot gif

The goal for the Pens was to put together a solid period without suffering anymore injuries. They achieved this and more after Crosby made a beautiful pass to Hornqvist.

Sidney Crosby you ain’t nothin’ but a hound dog and we are not worthy. You do not need to go to church today, just watch this gif 1000 times and your sins will be forgiven. Two minutes later Teddy Blueger decided to take a stay at the Heartbreak Hotel and score the touchdown.

Teddy bear has been very noticeable during the preseason and first two games. A shot-first mentality from this distance out of a fourth-line center is always a good thing. Tanev and Kahun pick up their first points as Penguins. Three minutes later Riley Nash takes advantage of a Letang whiff and feeds Gustav Nyquist right in front to make it 7-2. https://twitter.com/BlueJacketsNHL/status/1180655308491886594?s=20 Nothing else would go in and Mike Lange would jubilantly yell “Elvis has just left the building.”