Ravens slog and flog way to 26-23 win over Steelers 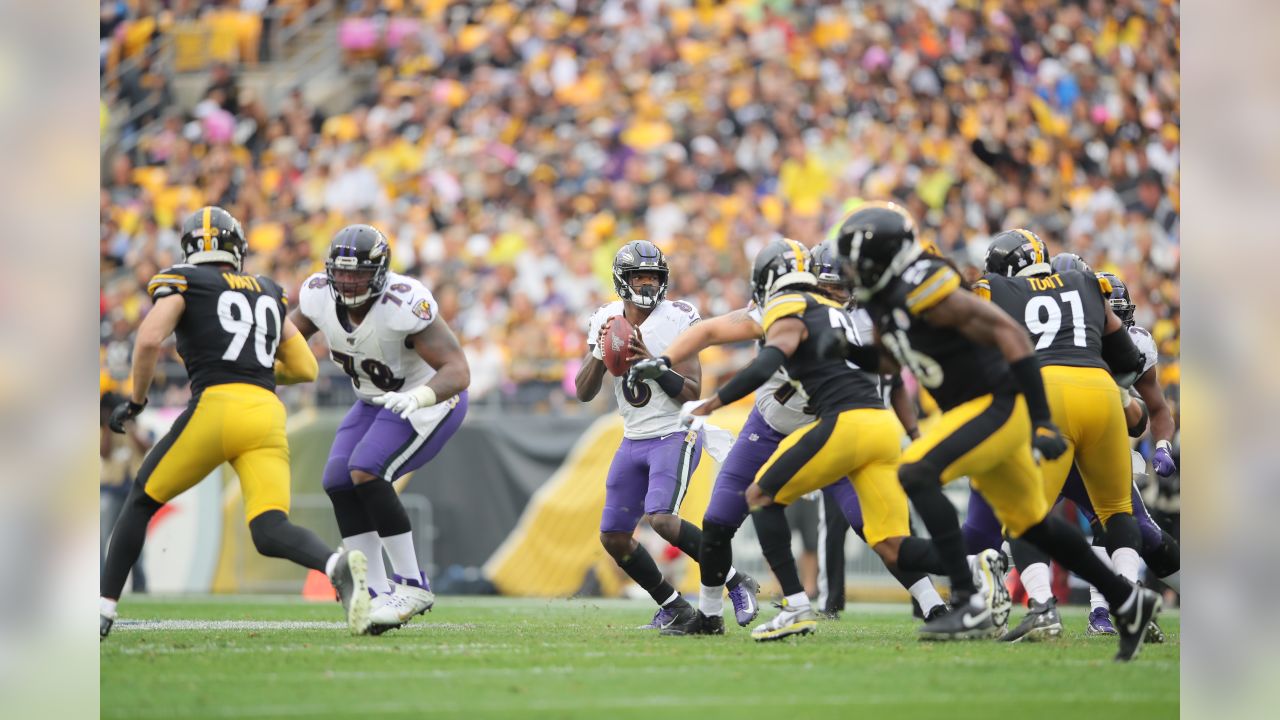 Ravens slog and flog way to 26-23 win over Steelers

Win ugly? This was beyond ugly…

To those who believed Greg Roman was going to reinvent the wheel (or at least the “wheel route”) on offense in Baltimore, well, that dream is over.

The Ravens offense is stale and predictable after only 5 games. What you saw them do against Miami in the opener was a pipe dream.

The Ravens ended a two-game losing streak anyway, thanks to their much maligned defense. Cornerback Marlon Humphrey forced a fumble and recovered it to set up the winning kick.

The Ravens (3-2) retake the lead in the AFC North by a half-game over the Cleveland Browns (2-2), who play at the San Francisco 49ers on Monday Night Football.

Troubling trend: Lamar Jackson‘s interceptions. Jackson has thrown five interceptions in his past two games. That’s two more than he had in his first 10 starts. Jackson had been great at making the right reads and decisions, going eight straight games without getting picked off. On Sunday, he was intercepted three times in a span of four passes: a forced pass over the middle to tight end Mark Andrews, a haphazard pass to the left sideline and a deep pass that went off the hands of tight end Nick Boyle.

QB breakdown: Jackson started off hot, going 7-of-10 for 70 yards and one touchdown as Baltimore scored on its first three drives. Jackson’s 11-yard touchdown to Marquise “Hollywood” Brown put the Ravens up 17-7 early in the second quarter. But Jackson managed to lead Baltimore to only two field goals, finishing 12-of-18 for 91 yards and three interceptions the rest of the way.

Baltimore (3-2) snapped a two-game skid when safety Marlon Humphrey stripped Steelers wide receiver JuJu Smith-Schuster and recovered the fumble at the Pittsburgh 34 early in the extra period. Justin Tucker slipped a 46-yard field goal through the uprights four plays later as the Ravens won at Heinz Field for a second straight season.

“(When overtime started) I was on the sideline and I was thinking, `Whatever happens right now, somebody’s going to make a big play and going to be remembered forever in the outcome of this game,” Humphrey said.

Maybe, but for all the weirdness of the game — from Lamar Jackson‘s three interceptions to Steelers coach Mike Tomlin’s decision to kick off in overtime instead of taking the ball to another crucial late-game fumble by Smith-Schuster — it’s the visual of Steelers starting QB Mason Rudolph unconscious on the turf in a silent stadium that will linger.

Trailing 17-13 and facing third-and-11 at the Pittsburgh 12 midway through the third quarter, Rudolph lined up in the shotgun and dropped back to pass. The play broke down and Rudolph scrambled to his left, stepping up the field in the process. He flicked the ball to teammate James Washington just before the crown of Earl Thomas’ helmet hit Rudolph under the chin. Rudolph limply fell to the ground and laid there with his eyes closed while medical personnel rushed to attend to him.

“I was just flying to the ball like I normally do,” said Thomas, who signed with Baltimore in the offseason after becoming a perennial Pro Bowler with Seattle. “I was asking the ref what happened and they said upstairs said that a part of my helmet kind of hit him in the chin, and that’s what caused the flag. I still believe that it wasn’t intentional on my part.”

Rudolph eventually came to as trainers cut off his face mask. He needed to be helped off the field by his teammates because the cart used to treat seriously hurt players stalled. Tomlin wasn’t sure why the cart wasn’t working.

“Ask somebody that is in charge of that,” Tomlin said. “I don’t drive carts and things of that nature.”

The scene of players on both sides going down to one knee while Rudolph was being treated was eerily similar to the on-field reaction in Cincinnati in December 2017 when Steelers linebacker Ryan Shazier sustained a spinal injury. Shazier, currently on the physically unable to perform list while he continues his rehab from spinal stabilization surgery, walked over to Rudolph and briefly comforted him as Rudolph made his way to the locker room for further treatment and examination as the crowd chanted “Throw him out!” at Thomas.

“When you see somebody lying lifeless like that it kind of strikes a bell,” Pittsburgh linebacker Bud Dupree said. “Any human being that cares about somebody in that type of situation will feel a certain way. … When something like that happens, it makes a trigger go off in your brain and you’ve got to control yourself.”

Baltimore coach John Harbaugh likened the hit to “kind of like a boxing deal,” adding he did not believe it was Thomas’ intent to hit the 6-foot-5 Rudolph so high.

“It’s fast and he’s closing and Mason is running and he’s not going down, throwing the ball,” Harbaugh said.

Pittsburgh (1-4) did not fold after being forced to go with Devlin Hodges, an undrafted rookie free agent out of Samford who was signed to be a “camp” arm before organized team activities. He trotted onto the field when Rudolph slipped out of view and hardly looked nervous. He completed 7 of 9 passes for 68 yards and also had a 21-yard sprint to set up Chris Boswell‘s go-ahead field goal with 2:41 to play.

It wasn’t quite enough to put away the Ravens. Jackson — with the help of a roughing the passer call on Steelers linebacker Ola Adeniyi — moved Baltimore in range to have Tucker tie it with 14 seconds to go.

Pittsburgh won the coin toss to start overtime, but curiously opted to kick the ball rather than receive it even though an offensive touchdown would have ended the game. Tomlin pointed to his team’s ineffective kickoff return unit as one of the reasons for the decision. Tucker had consistently pinned the Steelers deep in their own territory throughout the game. It worked. Pittsburgh forced a punt and took over at its 34 before Humphrey’s expertly timed forced fumble on Smith-Schuster swung the balance to the Ravens for good.

INJURIES: Ravens: Safety Tony Jefferson went down in the fourth quarter with a left knee injury. It’s a torn ACL and he’s done for the season.

Steelers: Washington left in the third quarter with a shoulder injury and did not return. Linebacker Mark Barron exited in the second quarter with a hamstring injury. QB Mason Rudolph was treated for a severe concussion, taken to the hospital for observation, and released to go home, although not expected to practice or play for the Steelers for at least another week.