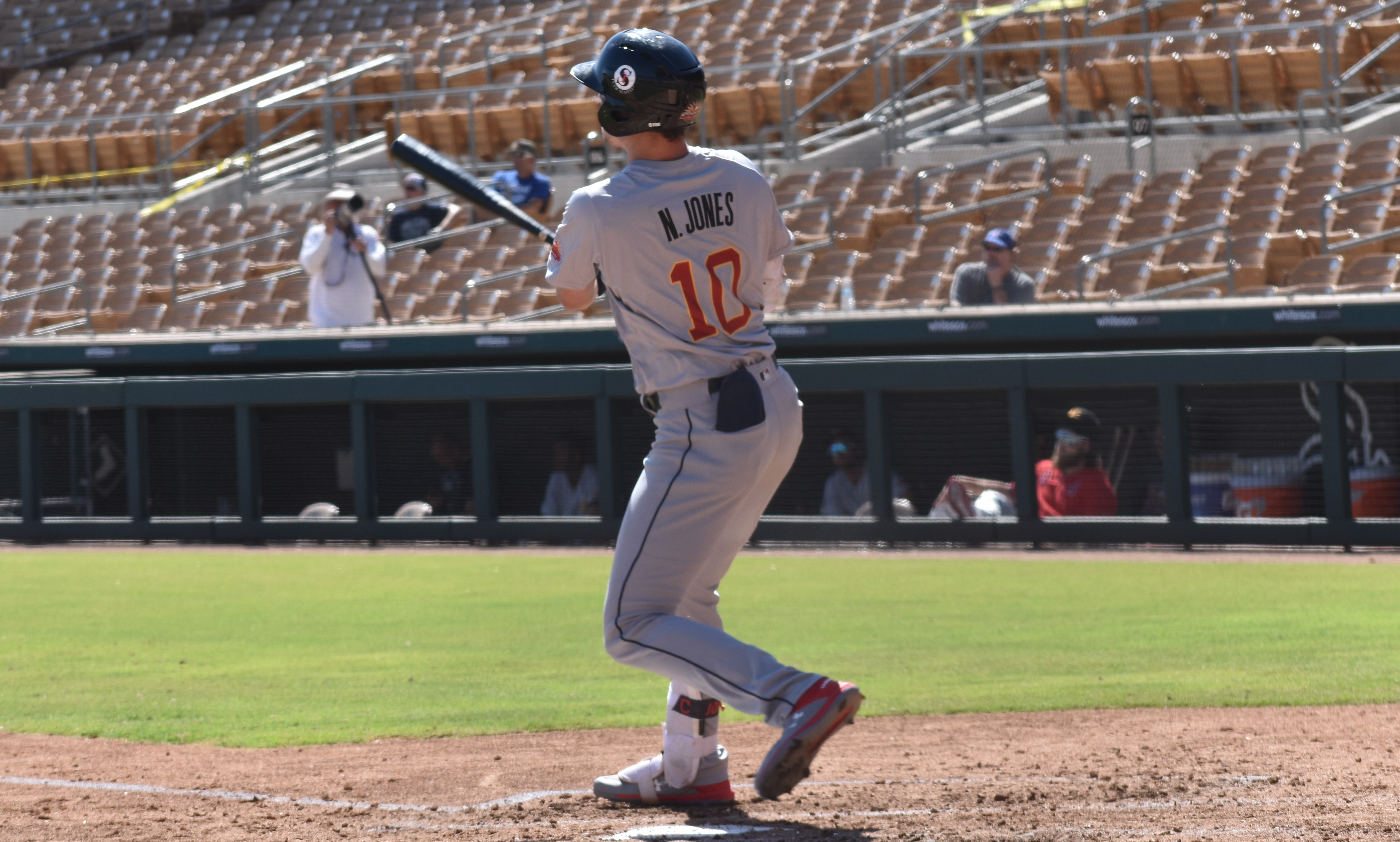 With three weeks in the books for Solar Sox, we are now at the half way mark of the 2019 Arizona Fall League season. They rattled off two straight wins on the weekend to bring their record to 8-7 and are now tied for second (of three teams) in the AFL East, two games behind Salt River.

After an off-day Monday, the Solar Sox headed to the west valley for the first time in 2019 after playing all of their first 11 games at either Sloan or Talking Stick. Taking on the Desert Dogs in their first day game of the season it was all Sox as they ran away 4-0. After a really rough start to the campaign, Anthony Castro (DET) was fantastic in the start, going four shut out innings with one hit allowed and four strike outs. The bullpen was equally up to task with the Cubs Erich Uelman sticking out as the top reliever with three strike outs in two innings.

Castro warms up prior to a start against the Glendale Desert Dogs at Camelback Ranch. – Joseph Coblitz, BurningRiverBaseball

Nearly all of the offense was provided by Nolan Jones, whose first home run of the fall was a three run shot in the third. Jo Adell and Greg Deichmann continued their recent hot streaks with a double and two hits each. Nine walks didn’t hurt the offense either.

Continuing with their up and down season, the Sox lost a tight one against the Saguaros on Wednesday night 8-7 with all but two runs scored in the first three innings. Adell hit his second homer of the season in the first inning and had three hits overall while Jones added his second in as many days in the sixth. Everyone in the lineup for the Sox reached base at least once with only Isaac Paredes (DET) going hitless.

Despite all the offense, Keegan Thompson‘s six runs allowed in 2.2 innings doomed Mesa from early on. Six relievers then followed, striking out six in 6.1 innings with just one earned run allowed between them, but the offense was essentially shut down after the third and couldn’t make up the difference.

Deichmann makes contact for the Solar Sox against the Desert Dogs during the 2019 AFL season. – Joseph Coblitz, BurningRiverBaseball

Continuing the trend of high scoring back and forth affairs, the Sox went to extra innings against the Scorpions on Friday, but ultimately fell short. Scottsdale got on the board early with a walk and a solo home run from Joey Bart (his fourth of the season), but this would be the only hit allowed in four innings by Kirk McCarty (CLE). He walked four in total and struck out a pair as he was not quite as sharp as his last appearance.

Adell continued his torrid run with an RBI double in the bottom of the third, then scored on an Paredes triple to tie the game. Zack Short (CHC) doubled in the fourth, leading to another run and the lead, then he was the first of four hitters to walk in the sixth to score two more.

From there on out it was all Scorpions. In the 8th Heliot Ramos (SF) took Alex Lange (DET) for a  three run shot to tie things up again, then they took the lead in the tenth when a Cullen Large single knocked in the runner who started on second. Prior to the bullpen blowing it, the first two relievers were solid as Wladimir Pinto (DET) and Brady Feigl (OAK) went three innings and allowed just one base runner. Added with McCarty, the Solar Sox allowed just two hits over the first seven innings before giving up four in the final three frames.

Mesa was originally scheduled to play Los Mochis on Saturday in Tuscon, but went against Los Aguilas de Mexicali instead. Again playing just seven innings, this game wasn’t anything like their other games against Mexican Pacific League teams (a combined 22-2 across two games). The offense was much slower this time around, but Ernie Clement (CLE) lead off and had two hits. They managed the win without an extra base hit as Greg Deichmann singled, scored on a Brandon Marsh (LAA) single and Marsh himself scored on a sac fly, all in the fourth.

Adell puts the ball in play for the Solar Sox against the Javelinas in a 2019 AFL game. – Joseph Coblitz, BurningRiverBaseball

After Daniel Gossett (OAK) allowed one run in the first three innings, the Solar Sox bullpen stood up and gave up just two hits over the last four innings.

Back in AFL action again on Sunday, they headed to Peoria to face the Javelinas. Aaron Hernandez (LAA) struggled early and made it just 1.2 innings, allowing two runs to score, but the bullpen was fantastic again with 7.1 scoreless innings. Nathan Bates (LAA) was the early hero with a bases loaded strike out to end the second inning.

Jones came through with his third home run of the season in the fourth, then Adell bumped his hitting streak to eight games with an RBI single to tie things up in the fifth. In the seventh, Deichmann added his league leading fifth home run of the season to take the lead and Clement helped cement the win with a walk, steal and run scored on a throwing error by the second baseman.

While the Sox are currently above .500, there are a couple of caveats. First, three of those wins have come against Mexican Pacific League teams. Overall, these teams have been less than elite and have went 1-4 against Fall League clubs with four games cancelled due to lack of pitching depth. Saturday marked the last of these games and the Solar Sox will face exclusively AFL teams from now on.

The second caveat is that they lost the first three games, but since have went 5-4 against fall clubs. Both Adell and Jones started off the season extremely poorly, but Adell has raised his line to .293/.369/.500 with six doubles and two home runs thanks to his current hitting streak while Jones has raised his slugging percent to .417 thanks to his recent power streak.

The bullpen has been great all season, but the overall pitching has picked up recently, specifically Castro in the rotation and Uelman and Jhenderson Hurtado (OAK) in the bullpen.