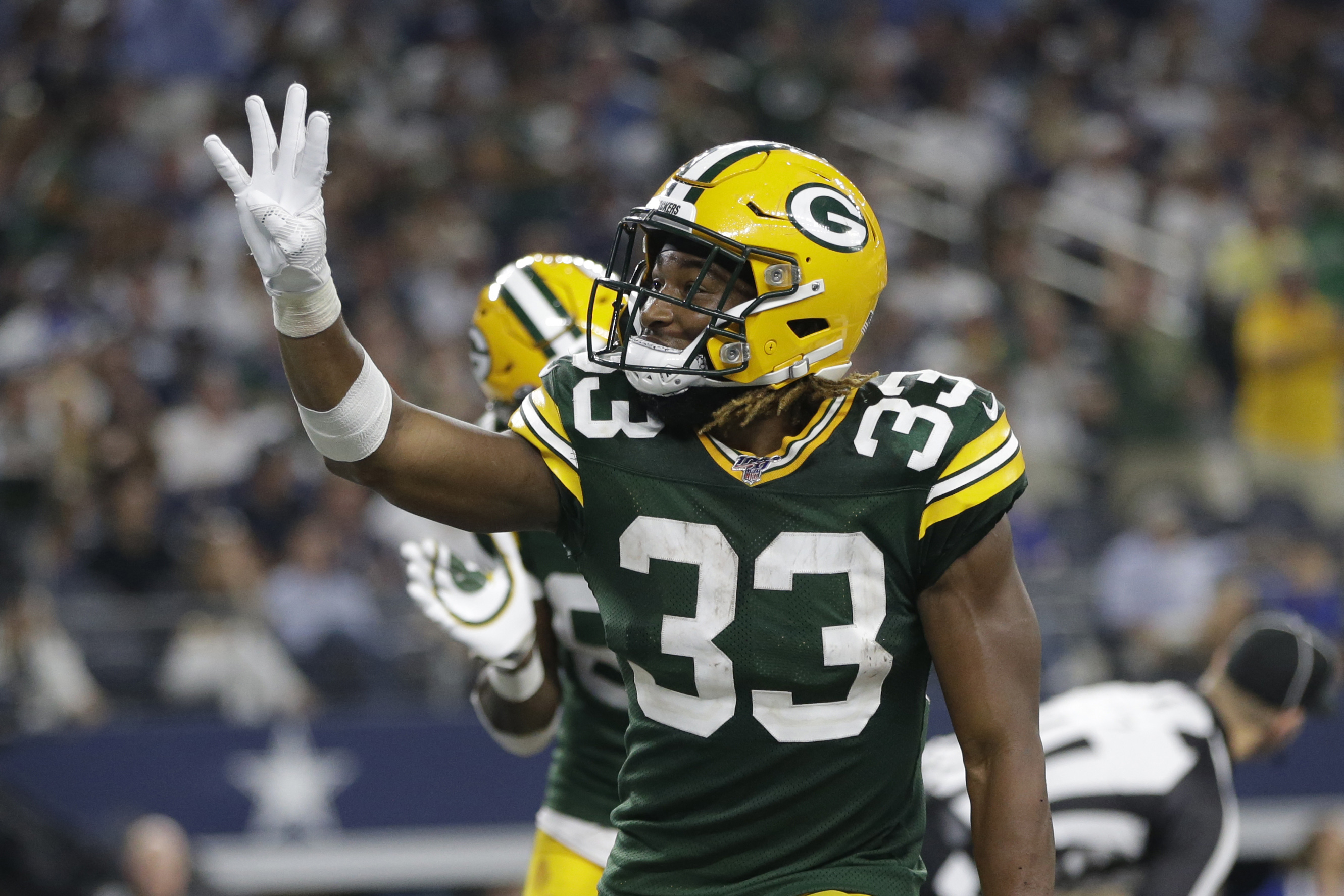 The Green Bay Packers improved their record to 4-1 with a 34-24 victory over the Cowboys in Dallas. The Pack jumped out to a 31-3 lead late in the third quarter and withstood a desperate comeback attempt by the Cowboys to earn the victory. Aaron Jones tied a team record by rushing for four touchdowns in the game while the defense put steady pressure on Dak Prescott and forced three turnovers.

Here is a look at 10 things we learned from the Packers victory over Dallas:

1. Aaron Jones Can Be a Dominant Player When Needed

The Packers needed somebody to pick up the slack with top receiver Davante Adams out with turf toe and Jones was the player who stepped up and was counted. Jones finished with 183 total yards from scrimmage including 106 yards rushing and four rushing touchdowns. He also led the Packers in receptions with seven and in receiving yards with 75.

Jones ability to make tacklers miss and to keep the chains moving was a key component in the Packers victory. He was even better inside the red zone as the longest of his touchdowns was 18 yards. Paul Hornung would have been proud of Jones’ play near the goal line.

Jones’ running allowed the Packers to dominate time of possession with Green Bay holding onto the ball for 36:43 while Dallas had it for just 23:17.

If I would have told you that Aaron Rodgers wouldn’t throw a touchdown pass in this game, would anybody have guessed the Packers would have scored 34 points and won by 10 points? Rodgers was efficient and smart and got the job done. He finished 22-of-34 for 238 yards and did not throw any interceptions. He kept the chains moving and did a good job of spreading the ball around, completing passes to nine different receivers.

Rodgers distributed the ball well. He completed 12 passes to running backs, four to wide receivers and six to his tight ends.

The only glaring mistake A-Rod made was snapping the ball with 12 seconds left on the play clock in the closing minutes of regulation with the Packers trying to milk the clock and preserve their lead but overall, Rodgers got the job done.

3. The Pass Rush Is the Key to the Defense

The Packers were officially credited with three sacks in this game, two by Za’Darius Smith and one by Preston Smith, but they put steady pressure on Prescott throughout the game especially when it counted.

Dallas was just 2-of-8 on third down and although they gained an ugly 563 total yards, most of that was gained after they were desperately behind on the scoreboard.

The pass rush was also the key in forcing Prescott into throwing three interceptions and that helped turn the tide of this game.

Overall, the defense was able to create pressure on the quarterback and force turnovers and that is Mike Pettine’s winning formula.

4. The Defense Took Ezekiel Elliott Out of the Game

Ezekiel Elliott averaged 5.2-yards per carry and scored a touchdown for Dallas, yet he was not a major factor in this game. Why? Because when the defense created turnovers and helped stake the Packers to a big lead, the Cowboys were forced to throw the football to try and get back into the game.

The key statistic was this: Elliott finished the game with only 12 carries. That prevented him and the Dallas offensive line from controlling this game.

The Green Bay run defense wasn’t outstanding, but it didn’t have to be because the turnovers the defense created made Elliott a non-factor.

5. The Depth at Wide Receiver is Still a Concern

The Packers were hoping one of their other wide receivers would step up in this game with Davante Adams out of the lineup but none of them really did. Geronimo Allison led all wideouts with two catches for 28 yards while Marquez Valdes-Scantling and Jake Kumerow had one catch each.

A look at the coach’s film will tell the complete story, but for most of this game, it was obvious that Green Bay’s wide receivers were simply not getting open consistently.

The Pack was able to throw to RBs and TEs more effectively, but the team’s lack of production at WR was noticeable and needs to be addressed in the coming weeks for the offense to truly click on all cylinders.

6. The Secondary Has More Depth

The final numbers look ugly, but the overall result was not bad. In addition to the momentum changing interception by Jaire Alexander, the Packers got picks from Kevin King and Chandon Sullivan. Sullivan was signed as a free agent in May. Will Redmond, another depth DB had a great game on special teams and had an interception that was called back by a penalty.

The Packers played a good portion of the game without starting safety Darnell Savage and King was playing through an injury but toughed it out and came up with a big pick.

The fact that Sullivan, Redmond and Tramon Williams all stepped up at key times is a testament to the depth on the secondary this year, something the Packers desperately lacked in recent years.

In fact, the consistent and positionally sound safety play of Adrian Amos is a big factor in this turnaround. Ha Ha Clinton-Dix was a gambler but when backup safeties or corners were in, his missed gambles really hurt the team. Having a steady safety like Amos back there makes it much easier to plug in depth players and stay consistent.

7. Tra Carson Stepped in and Contributed

The Packers were not ready to go with rookie Dexter Williams quite yet because of his inconsistent blocking and receiving skills. So, veteran Tra Carson was re-signed and activated this week to be Aaron Jones’ backup. Carson’s numbers don’t jump off the page, but he made four catches for 18 yards and gained 14 more yards on six carries.

Most importantly, Carson was where he was supposed to be when trying to protect Rodgers and the offense was able to maintain its flow with him was in the lineup. Carson proved to be a valuable pickup and made a subtle but important contribution to this victory.

8. Jaire Alexander Struggled at Times but Came Up Big at Others

This was not Jaire Alexander’s best game. He was burned badly on Prescott’s 53-yard touchdown pass to Amari Cooper. Cooper, who Alexander was covering for much of the game, finished with 11 catches for 226 yards and a touchdown.

Still, Alexander’s interception in the first quarter kept Dallas from getting an early touchdown and changed the complexion of the game. Alexander returned the INT 37 yards which helped flip the field and set up the Packers first score.

Although he gave up some big plays, Alexander never backed down and never lost his confidence. He is developing into a top-flight corner and even today’s tough moments can’t change that.

The offensive line also did a good job of opening holes for Aaron Jones and the rushing attack for most of the game.

Billy Turner had a few shaky minutes, but the Packers offensive line did well even after center Corey Linsley left the game due to injury.

David Bakhtiari continued to take too many penalties, and this is something he needs to straighten out as soon as possible. Bryan Bulaga played through his injuries, toughed it out and played a solid game.

10. The Packers Are Having Fun Again

It’s tough to pinpoint exactly why, but it’s very clear the Packers are having a lot more fun this season and appear to be more unified team on and off the field.

Maybe the addition of head coach Matt LaFleur has helped. Clearly, the addition of Preston and Za’Darius Smith has changed the team’s attitude on defense, giving the club a better vibe and more cohesive feeling.

It isn’t clear if winning breeds cohesiveness or cohesiveness leads to winning, but after five games and a 4-1 start, the Pack is clearly having fun out there and it shows in the results.