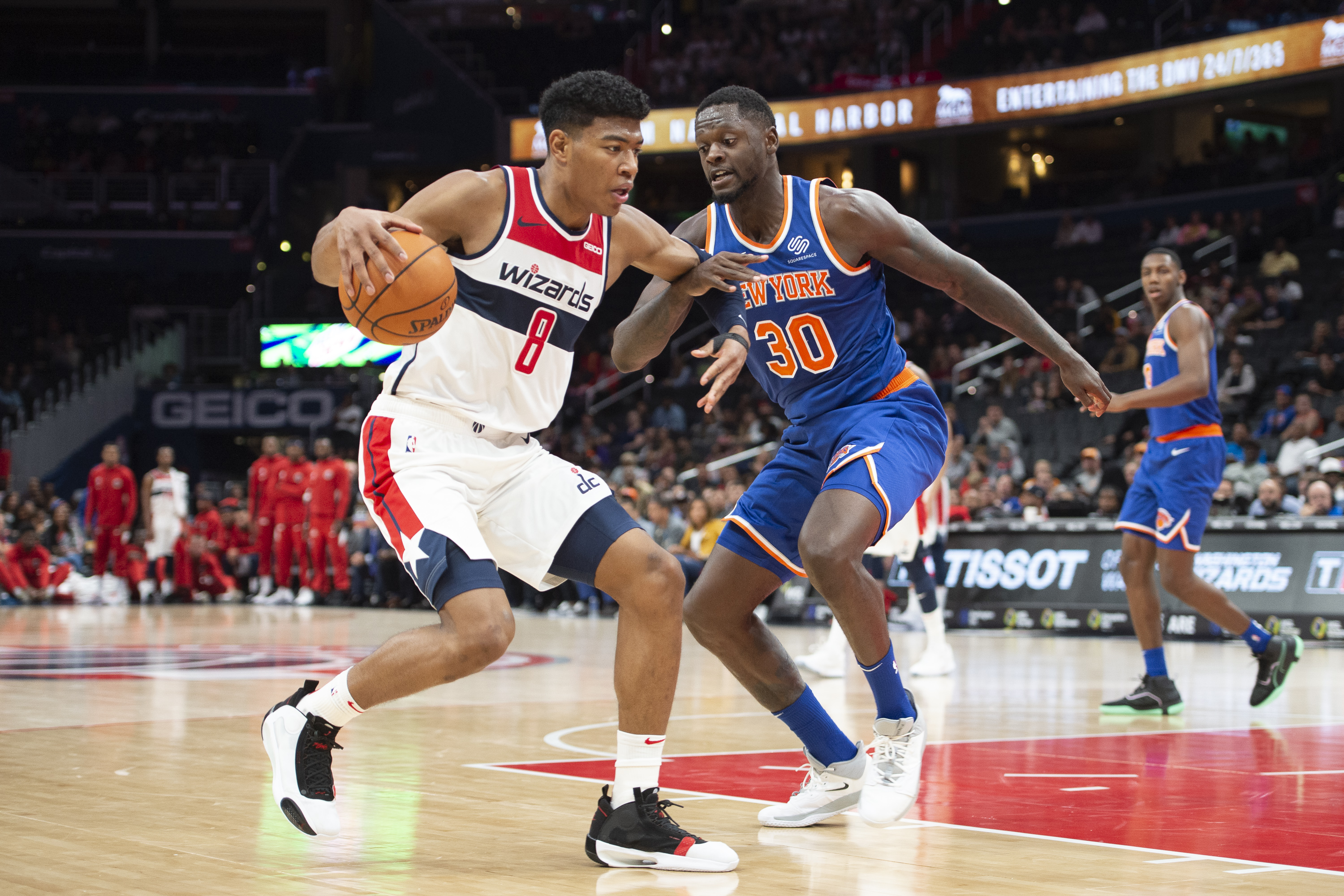 The Washington Wizards lost their preseason opener against the New York Knicks, 104-99, and for the most part, the results of the game does not matter. There was a lot of sloppy play on both sides of the ball and Marcus Morris got himself ejected for swinging his elbows at Justin Anderson before eventually bopping him on the head. For the home team, none of that matters compared to the promise that center Thomas Bryant and power forward Rui Hachimura put on display in limited playing time.

Bryant, 22, signed his three-year, $25 million contract a few months ago and already wants to pay dividends for Washington. In 27 minutes of action, the center recorded 14 points and 14 rebounds. The Wizards have struggled mightily to rebound as a team in recent years so that would be much desired throughout the season. The former Hoosier looks to have added more to his arsenal, too. He was hitting turnaround jump shots off glass and even dishing out assists to Hachimura for a dunk. Tommy Sheppard made the investment to retain the hard-working big man and the early returns are good.

“I just want him to continue to get better and improve and not just be so stagnant in his play,” head coach Scott Brooks said about Bryant. “I think he has the opportunities, and I’m giving him great freedom is to take good shots and be around all over the court. He has great energy; the guy seems to never be tired so it’s good for him to continue to expand his game. I mean, we’re not going to just change what we do just to cater to him but we’re going to add to what we do to suit his game. Defensively I thought he rebounded the ball well. We need him to be that rebounder every night. I thought their starters played good. I thought Brad [Beal] was really good on defending and playmaking. I told him I don’t want a lot of shots tonight the second time he comes into the quarter but I thought he did a good job. We didn’t make any threes off of our kickout so, but other than that I thought I thought our offense was pretty good. Be nice to make some more of those kick-out threes.”

Bradley Beal on Thomas Bryant: "He's a lot stronger for sure. He's able to catch and finish at the rim. He's been working on his jumper, his pick and pop. He's been doing a lot of stuff [since] last year, he's just gotten better at it. Put the time in, put the work in." pic.twitter.com/IMaU9WJPf8

Bryant’s fellow frontcourt mate, Hachimura, also showed some flashes of very solid play. I won’t go full Drew Gooden to describe the rookie as a Scottie Pippen type, but the Japanese Jumpman certainly has some skill. The 21-year old had a modest stat line with 12 points and four rebounds in 21 minutes, but his crafty meter was certainly high. He had a dunk on a drive from the perimeter, a layup off of pick-and-roll action with Bradley Beal, a step-back mid-range jump shot, and a kick out 3-pointer. For a team that is going to struggle to score the ball, Hachimura could wind up being the second-best scoring threat on the team this season.

“I mean the guy is, it’s the weirdest thing, he’s like a wise veteran already,” Brooks described his first-round pick. “He just plays with a real calm influence. Just a calm influence to his game. It’s great to see [since] you don’t see a lot of young players play this way and they’re very excitable–and they should. I mean this is their first time playing in the NBA but he doesn’t have that. Like I said before–I’m going to say it many times you guys can get tired of it–he was coached at a young age in Japan at the high level and you can tell. Obviously, I have a lot of respect for Gonzaga and their program [with] Coach [Mark] Few. I’m hoping I don’t mess it up. I hope I continue to add to his play and his greatness. I think he’s going to be a has the ability to be a really good player in this league, and I just like his way about him and it’s, it’s great to see and I think our players love it as well.”

The development of Bryant, Hachimura, and eventually Troy Brown Jr. (once he returns from a calf injury that he is about halfway through) is the most important thing for Washington during the 2019-20 season. Along with John Wall and Bradley Beal, that could be the Wizards’ starting lineup for years to come if all goes to Sheppard’s plan.