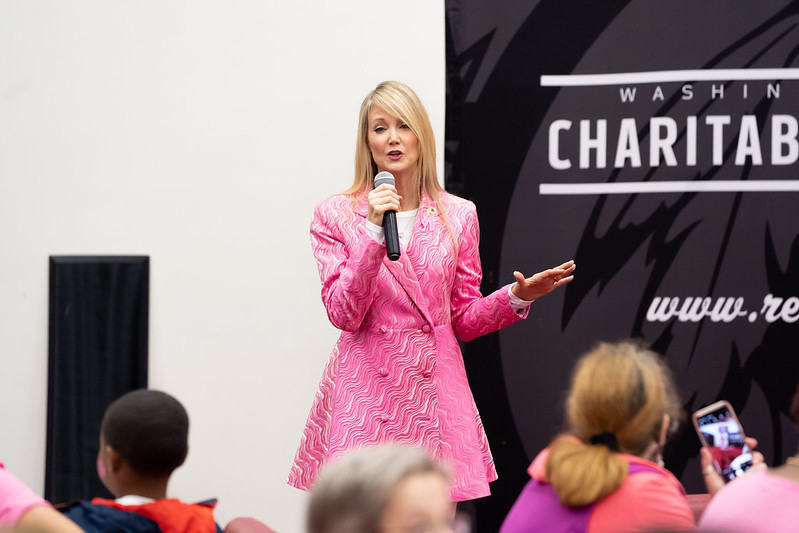 After attending the Patriots vs. Redskins game this past Sunday, Oct. 6 and participating in pre-game on-field ceremonies, the same exact group of 30 women were treated to a day dedicated to celebrating their life and fight against breast cancer.

The All-Stars were also treated to lunch, makeup consultations, massages and a behind the scenes tour of Redskins Park from Redskins players.

Check out the top moments from APR’s coverage of this special event here:

ABOUT THE WASHINGTON REDSKINS CHARITABLE FOUNDATION: The Redskins Charitable Foundation is ever-present in the community, constantly working to achieve our mission to make a positive and measurable impact in the lives of children that need it most. Since Redskins owners Dan and Tanya Snyder created the Washington Redskins Charitable Foundation in 2000, we have given back more than $26M to the community and currently provide support andservices to 178,000 individuals (mostly children) annually, focusing on supporting education, children’s health and wellness and preparing them for their future.  For more information on the Washington Redskins Charitable Foundation’s programs and events or to donate, visit www.redskins.com/community or follow the Foundation on Twitter at @RedskinsCR and Instagram at @redskinsgiveback.

This week, Shawn Anderson and Lou Olsen are joined by Greg Proops. The “smartest man in the world” returns to talk to the boys about (…)

According to ESPN on Sunday, Atalanta manager Gian Piero Gasperini was one of the 6,259,248 people across the world who tested positive for (…)

Congratulations to Ryan A. MacDonald  for winning (…)

In 2015, Dana White made a promise to Tyron Woodley. Unlike previous vows that women would never compete in the promotion or that Pride and (…)

Trevor Bauer continues to be one of the most outspoken players in MLB, regardless of the topic at hand. He’s been known to throw some shade (…)