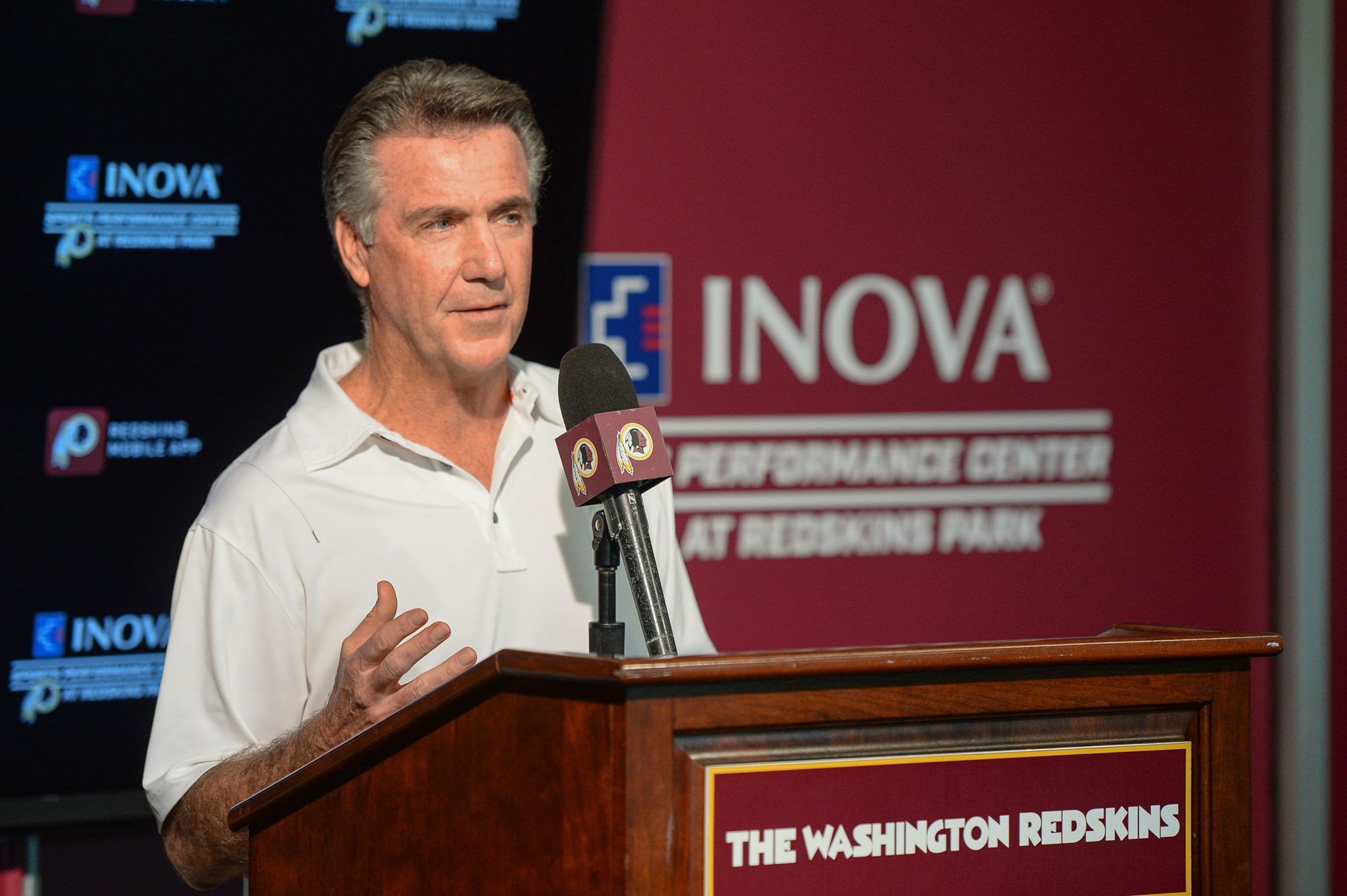 “Good afternoon. Last night after the game, we came to a decision that we had to relieve [former Head Coach] Jay [Gruden] of his duties. [Owner] Dan [Snyder] and I met with Jay this morning to release him of his duties. Jay was disappointed in not being able to achieve what we all wanted to achieve and it was a brief conversation. After that, we had a coaches meeting and we’re fortunate to have a seasoned veteran like [Head Coach] Bill Callahan on our staff, and we named Bill our interim head coach and had an entire coaching staff meeting and Bill has been grinding through meetings the rest of the morning. To make a decision like this is difficult, but it was necessary. Our 0-5 start is not just disappointing, we had much different expectations for this beginning of the season. We owe it to our fans, our millions of fans – not just here in the great nation’s capital, but across the world – the organization, the players, the coaches and their families to do everything we can to win. Under Bill’s leadership and the programs he’s going to put in, and the discipline and execution, we believe we’re given the best opportunity to beat the Miami Dolphins and for the rest of the year. With that, I’ll take some questions.”

On why the fans should have confidence in upper management:

“Right now, we’re all 0-5. I don’t believe anybody is hiding from their record. Our goal is to obviously change that and beat the Dolphins. When you’re around this building enough, you can feel the passion of these players. You can feel the ability of these players and you can see the coaches working their tails off to try and come up with a winning game plan. That’s all we can do right now is work toward the Dolphin game and the season and to keep developing these players.”

On if the quarterback decision will be made by Head Coach Bill Callahan:

“It’ll be up to Coach [Bill] Callahan who plays at any position the same way it was up to Coach [Jay] Gruden on who’s going to play. We’re thrilled to have [QB] Dwayne [Haskins Jr.] here. We think his future is very bright. Whatever gives Coach Callahan the formula for success I’m sure he’s going to do. You will be able to ask him that later today.“

On his level of accountability for the team’s struggles:

“We’re all involved in this. I don’t ever want to hide from our record, I don’t want to hide from things that didn’t go the way we wanted them to go. All we can do is work. Do I believe in the group that’s here? Yes. I think [VP of Player Personnel] Doug [Williams] and [Director of College Scouting] Kyle [Smith] had a great draft. I think they’ve had a few great drafts. I see what the coaches are trying to accomplish. I see what the people do at the stadium. They’re great workers. They care about this team. They care about this franchise. I’m not saying I care more than anyone, but I absolutely want what’s best for the Washington Redskins and we’re going to make sure we do it.”

On when the decision was made to fire Jay Gruden:

“I believe it was around eight o’clock, seven o’clock, somewhere around there.”

On if the firing was for cause:

On what he thinks he could have done differently that could have prevented him from standing here and addressing the second head coach that was let go during his tenure with the team:
“I promise you, I never thought of standing here mid-season with a coaching change. We all have hopes and dreams the same way the fans do and the players who are working out right now, trying to get better. All we can do is try to improve tomorrow. I’d like to change the result of a game or two, or a season, but you can’t.  All you can deal with is today and tomorrow and that’s what we’re going to do.”

On why Owner Dan Snyder didn’t address the media today:

On whether Dan Snyder will address the public:

“Yes, [Owner] Dan [Snyder] has made himself available from time to time.”

On replicating success from his prior teams to the Redskins:

“[Head Coach] Bill [Callahan], as I said, is seasoned. He has a track record as a head coach. He is already implementing a plan for this team and schedules are going to change and things of that nature. It is 0-5. We have 11 regular season games left and we still can accomplish many of our goals. There’s no one in this locker room that’s going to quit, no one in this organization who is going to shy away from some extra work. We’ll be confident in the work product and hopefully we can execute better on gameday.” 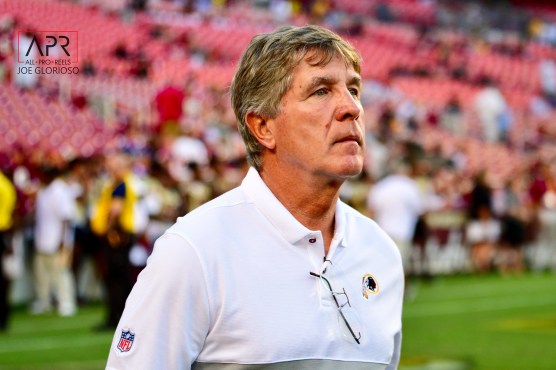 On whether there was a debate around drafting QB Dwayne Haskins Jr. and how he has developed:

“When you take a first-round player, it gets a lot of publicity. The seventh-rounders don’t get much publicity. All the coaches are involved in our draft meetings. When we’re setting the draft board, the coaches are involved and they sign off on everything. As far as [QB] Dwayne [Haskins Jr.], we’re excited as hell to have him on this football team and we think he has a great future ahead of him. He’s working very hard, he’s learning the system and when Coach [Bill] Callahan decides to put him in, he’ll make that decision. But Jay [Gruden] was excited about Dwayne Haskins and I think he probably talked to several of you from OTAs and training camp about how well he was doing.”

On FedExField being filled with Patriots fans:

“Well, I appreciate the fact that the Patriots have a great fan base and they’ve had tremendous success and [Head Coach] Bill Belichick is probably the best coach in NFL history, so I’m sure many of our fans put their tickets on the second market and made some money on it selling it to people from the Northeast. All we can do is try to improve our product. These games, we weren’t close in. We’ve lost five games and we didn’t lose them in the last second, we lost these games decisively. And we have to change that and our fans deserve that and this market deserves that – we’re in the nation’s capital and it deserves better than that, and we have to get it done.”

“It’s a question that maybe we’ll have to talk about in November or December and how we’re doing. Right now, everybody’s working on their jobs. We’ll have plenty of opportunity to explore what’s out there in the coaching world after this season. There are league rules that determine what you can and can’t do in coaching searches, which we’ll obviously follow.”

“He is not here and really there has been no dialogue with any other team.”

On the current culture of the Redskins:

“The culture is actually damn good. These people care. We have a very young core of players that we have brought in here who are accustomed to winning. If you look at the records of these guys, they’re accustomed to winning, they want to win. In free agency, we brought in [S] Landon Collins – great leader, great player, wants to win. We haven’t put it together, we’ve made too many mistakes on gameday, but the effort of the players and the rest of this organization is fantastic. [Senior Vice President of Player Personnel] Doug Williams, if you want to check his timecard, working all the time. Our scouts on the road are working all the time and they’re trying to find the right formula for success. These players have the ability and we just have to execute.”

On translating culture into wins:

“Through winning football games. We have to win. We didn’t win any of these games.”

On why nothing has worked over the last decade and why it’s so difficult to create a winning culture:

“I don’t necessarily agree with the premise that it’s ‘never.’ Last year at this time, we’re in first place and we’re doing well, so it was working pretty damn good and unfortunately our quarterback got injured. The pieces are here for a winning team. We have to put them in the right place, believe in each other and keep fighting for a goal. There’s only one way you win, you have to work and you have to get better and you have to beat your opponent. And that’s what we have to do, and I believe these players and these coaches will do that.”