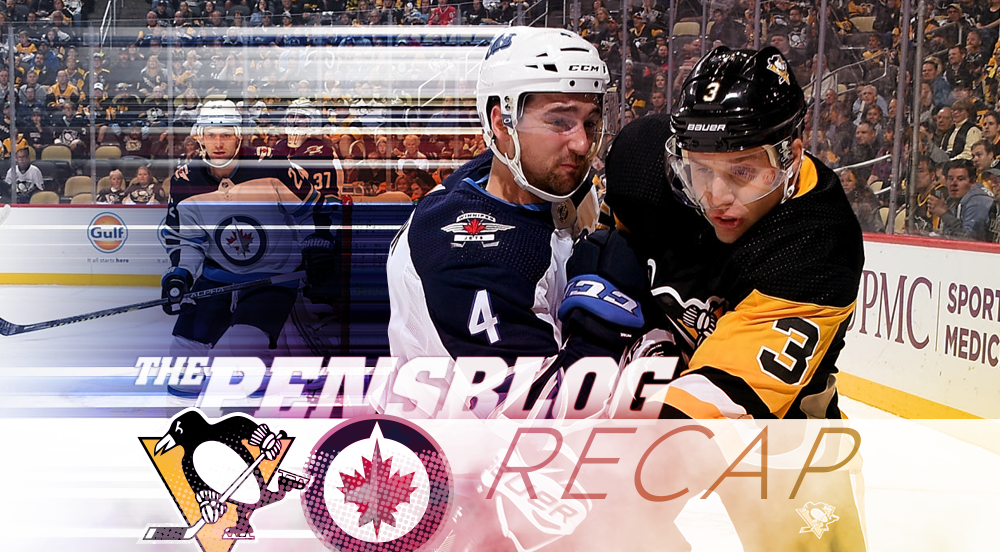 The Penguins played game three of their four-game homestand to start the season last night against the Winnipeg Jets. Much ado was made before the game from both teams. For the Penguins, they would be without 50% of their centers as Evgeni Malkin and Nick Bjugstad would be hanging out in the press box for a month or so. For the Jets, they were starting 6 defenders who had fewer games played cumulatively than most of the Pens had individually. Before we could get into that the Pens organization took time to honor the one and only Mike Lange before the game:

On this Mike Lange Night, we honor the voice of the Penguins.

You are truly best in class.

hashtag put him on tv for one more year

With half of the centers out of the lineup Sullivan decided tonight was a really good time to give John Marino his first game on defense, he also decided he would let the other six defenders play as well

Sam Lafferty would also get to play his first NHL game in this one.

Right off the opening faceoff, the Pens stormed into the zone and Jake Guentzel made a sweet pass to a streaking (calm down ladies) Crosby who buried it.

CAPTAIN CROSBY WITH HIS FIRST OF THE SEASON! pic.twitter.com/3TdHbRBokc

The first lesson for the young Winnipeg defenders came early, never let one of the most dangerous hockey players in the world alone in front. Not a lot to dissect here, tremendous vision by Guentzel to pick up Sid while spinning and then put the puck where he wants.

You could tell the Penguins wanted to attack the Jets early and to that extent, they were executing, but five minutes after the opening goal Gudbranson got outworked behind the net by Mark Scheifele who found Ville Heinola out front for his first career NHL goal.

How does a defender get such a clean look on goal? Glad you asked. To start the play the entire Penguins team is puck watching:

The puck gets tied up on a broken stick along the boards, and Jack Johnson, Teddy Blueger and Patric Hornqvist (the three pictured to Murray’s left above) all crash to the puck

It is simple arithmetic that if there are 4 Penguins along the wall and only 2 Jets, then there must be a 3 on 1 on the other side of this image. The puck gets fed behind the net and because of their momentum, both Johnson and Blueger are taken out of the play. In the image above Hornqvist is in good enough defensive positioning for the play that is about to occur, except…

Instead of picking up the open man Hornqvist takes a straight line to the edge of the net to thwart a short-side chance from Scheifele, who picks up the oncoming pressure as well as the open man. This is an acceptable breakdown of fundamentals for a team with 6 young defenders, not so much for a team with 14.3 million dollars on the ice. The puck went between Murray’s body and arm, definitely one he should’ve had.

The Pens continued pressing a bit after the goal but again we saw the team struggling to gain the zone effectively on breakouts. These struggles on the breakout were highlighted four minutes after the tying goal when the puck was along the boards behind Murray and Pettersson wrapped it around for what should’ve been a clean exit. The puck reached Zach Aston-Reese near the blueline who attempted a cute touch-pass that was picked off by Nikolaj Ehlers and taken to the hole.

I apologize for going picture heavy on this recap, but it’s what has to be done. Here is ZAR receiving the puck:

When ZAR surveys the scene before getting the puck he sees Teddy Blueger open as you do in the image above. However, ZAR doesn’t corral the puck smoothly, and in the NHL that split second turns an open Blueger into this:

Now you see Justin Schultz hanging out in the back where he belongs in the image above, so how does Ehlers get so open?

Schultz does not anticipate the turnover and instead continues going up ice at full speed. That is Schultz on top of the “Face-off” ice paint. Here was Schultz’s view as soon as the turnover happened:

As a defender, you have to assume the worst when you see three opposing jerseys crashing on the puck and hang back in the zone a little bit. Schultz miscalculates and instead of a simple 2 on 2 the play turns into a 2 on 1. Below I will show Murray’s view of things. Credit has to be given to Ehlers for hiding the puck from Murray’s vision until he could pick his corner. The red line below is the eventual line the puck takes to the net:

I’m not defending Murray, but this goal was a hell of a play by Ehlers and I am more willing to overlook this one compared to the first goal against. The Penguins would calm things down the rest of the period. Hornqvist took a shot and left the bench for the room, he would return a few minutes later but he would not finish the game.

Up in shots, blocks, and faceoffs… And lookin' for some more goals. pic.twitter.com/gJPH4Jwuj9

After the Penguins got off to a hot start in the first you were kind of hoping they could erase the last 19 minutes of the first period and start clean in the second. That gameplan worked for 54 seconds before Tucker Poolman, who may be a character from The Sims, made it 3-1.

Here is Murray’s view of things:

At this point, the Penguins had as much life as the flat earth movement and you could’ve turned the game off and predicted the rest. Hornqvist was off the ice for the rest of the game and the Penguins were down to 10 forwards and 7 defenders with approximately 3 players remotely interested in playing.

After 10 minutes of watching the Penguins almost put it together the Jets crashed the net and notched their fourth of the game. The goal was reviewed due to the crease looking like a line of scrimmage, but it was ruled Murray was not interfered with and Pionk’s goal stood. If you read Pionk without saying “Poink” in your head you’re a damned liar.