Your Morning Dump... Where we again realize that Kyrie ruined everything 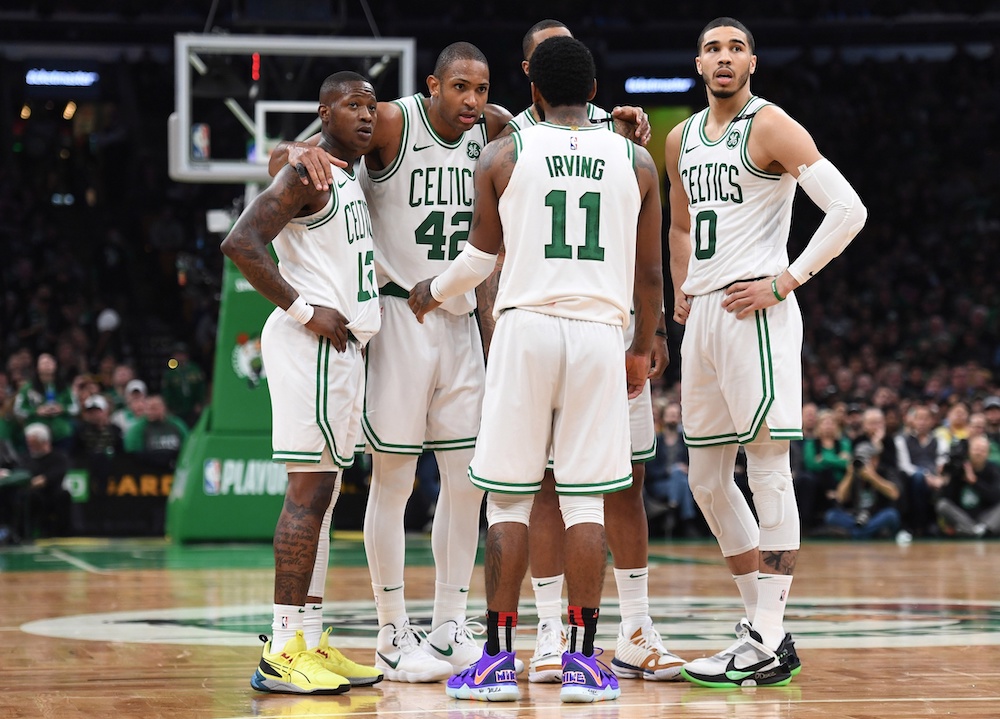 Your Morning Dump... Where we again realize that Kyrie ruined everything

As far as on the court, it’s certain Horford wasn’t interested in playing another hand from the same deck. I asked him if his decision would have been different if Irving had remained.

“I’m not sure that has anything to do with it for me,” Horford said. “I just think that if Kyrie would have stayed, I don’t know if it would have worked. There would have had to be some major changes as far as players, because it was just clear that the group that we had just wasn’t going to be able to coexist.”

And what about if he’d known Kemba Walker was coming. Horford paused.

“I don’t want to get caught up in the past,” he said, “but, yeah, that would have been totally different.”

What? Did you think we would lead with TD Garden’s statement about their shrinking legroom where they just told everyone to try and get smaller?

This was the bombshell of yesterday evening after Steve Bulpett wrote up his story from his jaunt down to Philly to surprise Al Horford. What an absolutely perfect idea for a story, by the way, and the timing was just too perfect. Go to Horford’s first Philly press conference and Bulpett likely would have gotten a canned, prepared answer about how Al loved his time in Boston, but it was time to look forward. Ask him on the morning of October 23rd, and all of Al’s focus would be on the game that night. But walk on into a training camp practice unannounced across enemy lines, and it appears Horford was willing to tell all.

And Al did reflect a lot, but it’s the above revelation from Bulpett’s story that stings the most and is so damn obvious in retrospect. Al Horford couldn’t stand playing with Kyrie Irving. And last year left such an awful taste in Horford’s mouth, that he couldn’t stomach the thought of playing with him again.

Sure, Horford could have read the tea leaves, realized Kyrie had 2 feet out the door to BK, and decided to stay, but this wasn’t the only factor in his decision. Still, had the Cs really wanted to keep Horford, they could have let him in on their plans to sign Kemba, and laid out a path to make it all happen (even though Chris Forsberg threw cold water on that idea and even though he’s right about it, too!).

I can’t help but let my mind wander back to last February, when some Kyrie trade rumblings made their way into the rumor mill. At that point, I guess the front office and Brad still thought this team could flip a switch come playoff time, but when you listen to the Horfords, Jaylens and even Kyries of the world, it’s clear in hindsight no flipped switch could have completely masked the discontent that emanated across the roster.

An Irving trade likely would have yielded a similar playoff result, likely would have improved chemistry and the Celtics may have been able to sell Horford on a new path forward to contention in his twilight years.

Again, none of this may have been enough. Horford was also pretty frank in his assessment of the Sixers and Celtics:

“And then I’m looking at my career and myself and the years that I have left. There were certain things that we wanted to accomplish as a team and things that we needed to make that happen. We got all those pieces last year, but it didn’t happen for us, and moving forward I didn’t know if it was going to be a two-year wait or whatever it was going to be. It was that and the financial reasons. When we started with the team trying to come up with things and we couldn’t agree on certain numbers, that’s when I decided, you know what, I’m going to have to open my free agency. I believe not only that I am worth a certain amount of money, but also I want to be in a position that I have a really good opportunity to win now. You know, my window is now. That’s how I feel.”

The Celtics weren’t willing to give too many years and too much money to a 33 year-old, and Horford wasn’t willing to give the Celtics too many years to get their shit back together. It makes sense. And anyone who boos Horford in December should leave the building. But the what ifs about Horford, given his “that would have been totally different” comment, will stick in the craw of Celtics fans for a long time.

NBCSports Boston — Horford opens up on his decision to leave Cs

On page 2, Brad Stevens is ready to put last year behind him

“I haven’t talked to Brad,” Smart said about his starting status. “None of us have. This year, I’m not going to talk to him. Whatever Brad says, we’re trying to our fullest, complying with it and do it. Brad is always putting us in a position to win and we’re trusting him more this year than ever.”

Given the massive question marks in place across the roster, while going up against an improved Eastern Conference, the challenge will be greater than ever for Stevens to navigate this team back towards a contending level once again. However, if the first week was any indication, there is far better buy-in across the roster than last year. Stevens has the full ear of his team again and that’s a promising development for a franchise that will need to maximize every facet of this group to make serious noise in the Eastern Conference this season.

“I have all the confidence in the world that last year was a learning experience for him, just like all of our young players,” Danny Ainge said. “Like I said many many times before and I’ll continue to say, he’s the least of our worries. He’s prepared, and I think these experiences are going to make him a great coach.”

New season, new rotation players, new attitude from key players, same coach. The coach who has taken ragtag rosters to unexpected heights, and the coach who last year presided over one of the biggest disappointments in Celtics history (please don’t tell me I’m overreacting on this one). Was it all his fault? No. I’d argue a lot of it falls on Danny Ainge and company, but Stevens couldn’t fix it.

Many of the key faces are still here this year, though the expectations are lowered a bit. Still, if you read the above thoughts from Marcus Smart and Danny Ainge, they’re confident that Brad will figure it out this year.

What if he doesn’t? What if the Celtics not only regress (which, face it, could happen) but regress significantly. What if the improved Miami Heat and Orlando Magic are above them in the standings? What if Indiana continues to outperform its expected win total and what if the Nets look just as cohesive as they did last year and then some with Kyrie Irving? What if Toronto’s role players bind together to lift Pascal Siakam to superstar heights? What if that puts the Celtics in a fight for the eight seed with the Detroits of the world?

This is a worst case scenario, but it’s not entirely out of the realm of possibilities. And if it does happen, it’s likely on Brad more than it is on anyone else.

(Our season predictions are starting next Monday and I promise this isn’t a preview of what I think is to come!).