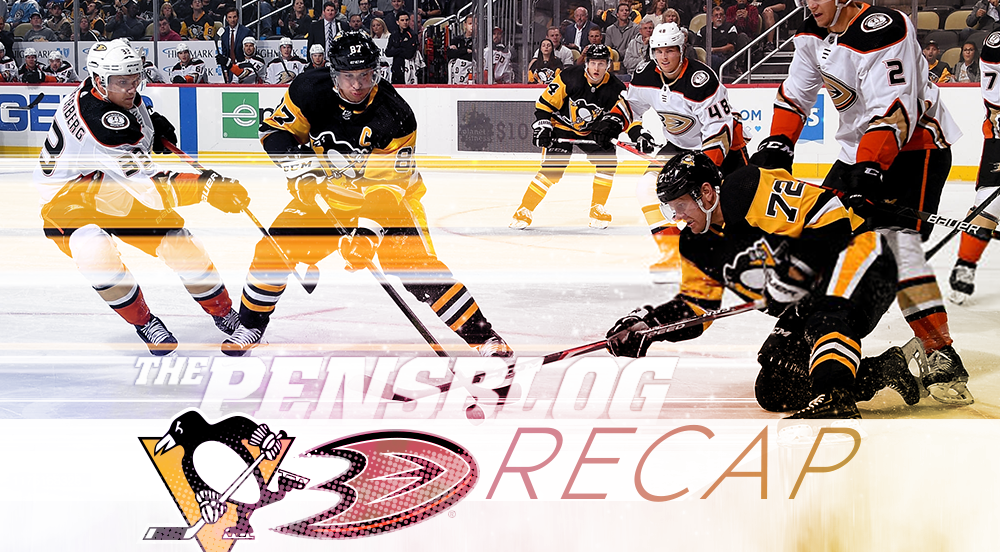 The Penguins ended their four-game homestand to start the season last night by hosting the Ducks. The Pens would be taking on the undefeated Ducks with a cool 22 million dollars worth of forwards watching from the pressbox. Sullivan also announced that he learned his lesson and would roll with the more tradition rotation instead of using 7D and 11F. John Marino was impressive enough in the preseason and his first career game to get the nod as Gudbranson, Ruhwedel, and Riikola sat out. Unimportant note, Daniel Sprong would not play in this game because he is in the AHL, glad everyone got mad when the Pens flipped him for Pettersson, who would play in this game.

The Pens didn’t give up a goal in the first minute of play and that was considered a small victory. Less than three minutes in Dominik Simon drew a slashing penalty and the powerplay would get an early look. With the first line out prior to the penalty the Pens put out, and this is not a joke, ZAR – McCann – Kahun as the forwards with Pettersson and Dumoulin on the backend. Impressively, this unit maintained possession off the draw and kept the puck in the offensive zone for over 40 seconds but Gibson was awake early. The first unit came out and failed to get the puck into the zone three times before the penalty expired.

Three seconds after the penalty concluded Adam Johnson went violently into the boards with some help from Korbinian Holzer.

Teddy Roosevelt Blueger took exception to the hit and dropped the mitts with Holzer for a “fight.” Theodore vs Korbinian is coming to a PPV near you in 1795.  Bourbon Bob Errey loved that Blueger stepped up. Meanwhile the Pens received a penalty for instigating and Blueger would be down for the next 17 minutes as he picked up 5 for fighting and 5 for misconduct for initiating.

The Penguins penalty kill, featuring new faces Sam Lafferty and John Marino didn’t let the Ducks get too many looks and killed it off with ease. After nine minutes of scoreless 5v5 the Pens acted like your mom and took a too many men penalty. Again the penalty kill featured Lafferty, who was noticeable throughout the kill. After the penalty expired the Pens got to work, Simon forced a turnover and gave Letang a killer look on goal but Gibson made a good save. A few seconds later Simon drew his second penalty of the period when he was slashed again.

Numbers after the 1st period of play ⬇️ pic.twitter.com/Lz4dkDl86x

The Pens would open the frame with a minute on the powerplay but who is counting? Not even two minutes after that penalty expired the Pens were going back to the man advantage when Manson lured Tanev into the boards. As usual, Crosby opted to take the faceoff in the left dot to start the powerplay. After the draw, the two centers tied each other up and the Ducks should’ve had possession. Should have. But Patric Hornqvist was hungry and outmuscled his man to get possession. The puck went from low to Schultz, Schultz to Letang, and Letang with the slap pass to the slappin’ ass of the Slick Sloppy Slapping Sidney

More of this, please. pic.twitter.com/4x7Cpzda4U

In my last recap, which you can read here or probably verbatim on DK’s blog, I mentioned that the Pens were lacking that desire to get to the puck. Hornqvist had that desire and it not only resulted in a scoring chance but a goal. Just an unreal effort by Hornqvist and it sucks he doesn’t get a point for this, which is why we have analytics. Also, Kris Letang, who sucks, has points in all four games to start the season.

The Penguins would hold on to the lead for about thirty seconds before the Ducks worked the puck down low, sent it from behind the net to Ondrej Kase, and Kase snuck it in on Murray.

Here's a look at the Ritchie pass and Kase goal that tied it in a hurry. pic.twitter.com/qNSz33hoEM

In a game where 25% of your starting forwards are on the injured list and your team actually has the lead, this save has to be made. Fortunately allowing this one resulted in the game being tied instead of a deficit, but you know Murray wants this one back.

The Pens would get their fourth powerplay of the game a few minutes later, during that man advantage Letang would take a stick to the head and the Pens had a 5 on 3 for a full minute. They would use a timeout and Mark Recchi, who is becoming more and more wrecking ball-shaped every year, would diagram a way to waste this opportunity. After the penalties expired the Ducks got some great looks on net, including a nifty move by Derek Grant but Murray was able to keep everything out.

"You probably think that you are better now, better now."
– Post (M)alone

The rest of the period was filled with battles in the corners and grinding on the walls. Usually, this is boring hockey in October, but considering the Pens struggles in this particular area, it was actually enjoyable to watch. The team, as a whole, was much more attentive to details and hungry in these battles compared to their previous two losses. Neither goalie would budge and we were heading to the third tied at one.

Any bold predictions for the rest of the game? pic.twitter.com/8zsJ0K5771

For the second straight period, the Pens would start with an abbreviated powerplay. Right after the powerplay expired Letang would make a nice pass to Hornqvist but he just couldn’t elevate the puck over a sprawling Gibson

Gibson keeps it tied with an incredible stop with the pad. #LetsGoDucks pic.twitter.com/7cCnfs1hOR

Not long after this the Simon-Crosby-Guentzel line continued to shine, Simon got the best look but just couldn’t beat Gibson five-hole. The Pens started tilting the table a bit and the next seven minutes were essentially spent in the offensive zone. Justin Schultz had multiple opportunities, he finished the game with 6 shots, but just couldn’t get it by Gibson. After this sustained pressure, the Ducks had a great opportunity after Blueger turned the puck over attempting a cute touch pass in the defensive zone on the breakout but Murray was there to bail them out. Following the save Dom Simon won a battle and fed a racing Crosby at center ice. What happened next was pretty much the career of Crosby in 10 seconds. Sid starts behind the play but fights off a player to get free to the puck, then he has to use his hand-eye coordination to control a bouncing puck, uses his left arm and frame to shield off a defender at the blue line to gain access into the zone. With his head up the whole way, he circles below the net and feeds a backhand pass right into the wheelhouse of Jake Guentzel and ABAM.

A few years ago I realized that my hatred of the Capitals shouldn’t mean I hate Alex Ovechkin. I have since relished in watching Ovechkin and appreciating the pure goal scorer he is. I am incredibly saddened that people will not do the same for Crosby because of the sweater that he wears. Missing out on a player like this just because you don’t like the team is a disservice to being a hockey fan. Dominik Simon with the cute legal pick to open this lane for Guentzel. You probably know that we (and especially our site manager G-off) are big Simon fans. In fact, G-off has poured some straight facts about Simon which were published here in March and here in September. A ton of the data from the March article was used in multiple media posts throughout Pittsburgh, with no credit given. In the September article, G concluded his part about Simon with this quote

Following the goal last night by Guentzel, DK came up with this all by himself:

Not to be that guy, but trail everything Dominik Simon did the whole way up the ice just now, beginning deep in the Pittsburgh zone, to support that play. I'll repeat it until I'm declared Dom's long-lost uncle: It doesn't matter who scores the goals, just that they're scored.

Not to be that guy, but you had no problem trying to throw bones around DMs so why not throw one where it is properly due.

Blog wars aside, the Pens would get another great look on goal when Simon would set up Letang a few seconds after the Guentzel goal but the shot was deflected out of play. With ten minutes to go ZAR would get called for tripping and the Pens PK would be tasked with its biggest assignment of the night. Early in the kill Getzlaf would get a great look on net as he wired one towards the top corner but Murray was there, with his glove but whatever, to keep the puck out. The Pens would kill the rest of the penalty with a little help from Murray’s neck hole in his jersey.