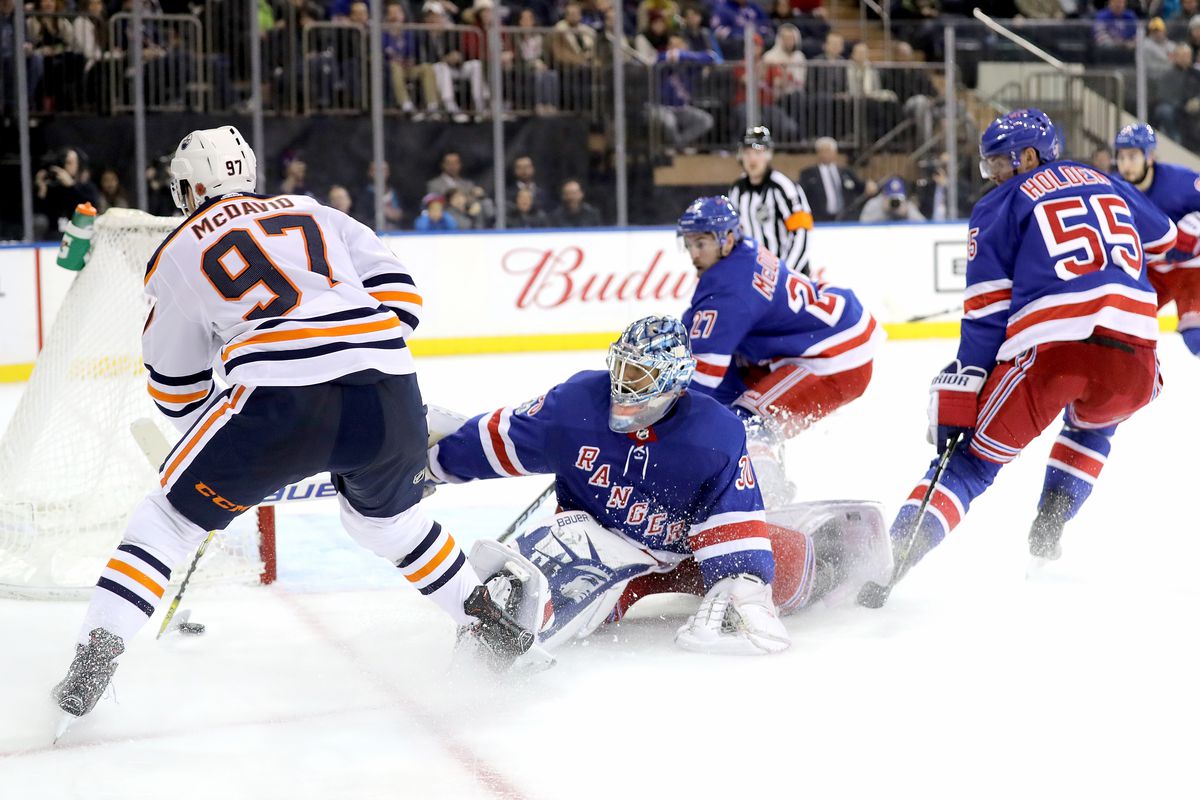 The Edmonton Oilers look to do something they have never done before this afternoon. The Oilers are looking to sweep the New York metropolitan area. They visit Madison Square Garden this morning to take on the New York Rangers in the first of two meetings between the sides on the season.

The Oilers swept the season series a year ago, winning their first game of the season at world’s most famous arena last October. That sparked a three game winning streak for the team. Both teams are unbeaten this season. The Oilers are 4-0-0 after their win in New Jersey on Thursday, while the Rangers are 2-0-0.

Mikko Koskinen gets the start for the Oilers, while Henrik Lundqvist gets the nod for the Rangers.

Edmonton: Contain the Panarin line. The rebuilding Rangers still have their warts and are not yet a finished product. That said, they have one of the most dangerous lines in all of hockey in their possession. If the Oilers want a prayer today, they’ll have to lock down the Panarin line. He, Mika Zibanejad and Pavel Buchnevich have been terrific through two games.

New York: Attack with speed. Although the Oilers are 4-0-0, their possession numbers aren’t great and they didn’t exactly play well on Thursday in Newark. The Oilers defense is still learning Dave Tippett’s system and isn’t clicking on all cylinders just yet. Attack with speed and you should be able to generate some offensive chances.

Edmonton: Oscar Klefbom is going to be leaned on heavily this afternoon. Klefbom, Edmonton’s top defenseman, will likely be tasked with handling the Panarin line. How he fares today likely dictates how the Oilers fare. Klefbom is worth paying attention to for that reason alone.

New York: Oilers fans will get their first look at Artemi Panarin as a Ranger today. The elite Russian forward signed with the club on July 1st and has rejuvenated the franchise. The Rangers are still a work in progress, but Panarin certainly moves the needle in this rebuild.

It looks like there will be some changes for the Oilers. Alex Chiasson and Josh Archibald both practiced in the bottom-six on Friday and could return to the lineup. In that case, Joakim Nygard and Patrick Russell will sit. The defense will remain the same, with Brandon Manning being the healthy scratch for the fifth straight game.

The Rangers youth movement got a huge boost this off-season with the Panarin signing, but it wasn’t the only major transaction. The club traded for RFA D Jacob Trouba and drafted Kaapo Kakko second overall in June. They also promoted Lias Anderson to the NHL and inked D Adam Fox. Fox was acquired from Carolina last spring.

The Oilers are looking to start 5-0-0 for the first time since the 1985-86 season. The Oilers, at the time two-time defending Stanley Cup champions, would go 8-1-0 in October. In the end, Edmonton fell to Calgary in the second round of the playoffs that season.

The Rangers have played just two games this season, and haven’t suited up since last Saturday when they knocked off the Ottawa Senators by a final score of 4-1. New York won their lone home contest 6-4 over the Winnipeg Jets on opening night.

The Oilers didn’t play their best game on Thursday night. Captain Connor McDavid admitted as much, but applauded the team’s resiliency. “When you’re 4-0, there’s lots of positive stuff going on,” McDavid said Friday. “We’ve been resilient, we’re staying in games and sticking with it. We’re finding different ways. Different people have stepped up, so it’s been good.”